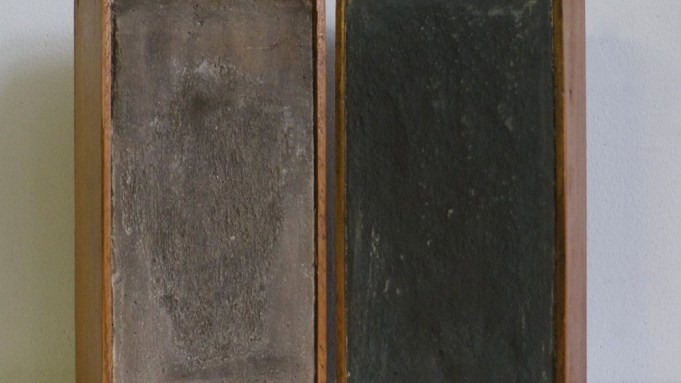 Michelle Stuart has been grappling with ideas of land and space, history and myth, the atomic and the cosmic for more than four decades. Born in Los Angeles in 1933, Stuart spearheaded the use of non-traditional materials from nature in the early ’70s, and has produced and exhibited her work internationally.

“Drawn from Nature,” at the Parrish Art Museum in Southampton, N.Y. (through Oct. 27), includes work spanning Stuart’s career from the late 1960s through 2010. Made in the same year as Neil Armstrong’s first lunar steps, the drawing Moon (1969) depicts the contours of that orb’s pockmarked surface. In works likeKatsbaan, #1 Woodstock and #5 Moray Hill (all 1973), scrolls of heavy, muslin-backed paper drape off the wall; covered in earth, they are physical vestiges of the land itself. Arranged in a grid like the days of a month, seeds ooze their lifeblood into the rice paper of Stuart’s “Seed Calendars” (1992-95). Grids of photographs, both original and found, create curious and mesmerizing allegories [Ring of Fire, 2010].

Stuart spoke with A.i.A. by phone recently about the influence of the American West on her practice, the challenges of working with many mediums and using photography to create narrative.

CARLY GAEBE Your investigation into land and place has been life-long. How did it begin?

MICHELLE STUART I’m from California, so my involvement with land was really from the beginning. My parents, or at least my father, engendered that in me. We always went to the desert, the sea or the mountains. It was a good beginning. I feel a relationship with space that is totally different from any other relationship. The Pacific Coast and the Pacific itself are passionately roiling and superb, and scary and solace-filled. Being from the West is something that you never get out of you.

GAEBE Your work spans drawing, photography, sculpture, installation and site-specific earth works. What is the biggest challenge as you work with your materials?

STUART If I use up a certain medium with my questions, I start asking them in another medium. Each piece is a challenge to be true to yourself. Is this really who I am and what I want to say? How far can I go with this? It has to be lucid, although not too lucid! In some of the things I’m working on right now there’s the feeling of telling a fable, but the fable is true. You have to have things in [the piece] that might not be true in order to communicate the truth.

GAEBE Your newest works are almost all photographic—what precipitated that evolution?

STUART When I was in school, I was caught between wanting to be an artist and wanting to be a writer. I gave up on the idea of becoming a writer, but then late in life, I decided that I was going think in a narrative way, using images. What I am trying to do now is to make a fable using my own photography, and found photography if the work needs a memory that is greater than mine.

GAEBE Your large scrolls are both expansive and intimate, a kind of memorial to a particular site. Can you describe the process of making these works?

STUART There are two big scrolls in the show. I always thought of them as something that was intimate but that was going right into the viewer’s face and bringing you in; [it’s about] that confrontation with the minuscule and the grand. In the beginning the scrolls were imprints. By rubbing the paper into the earth, you make the image come up, like magic. Later, I smashed rocks and earth into the surface and it took on the coloration of the earth itself.

GAEBE How did you choose your locations?

STUART Charles Simonds had gone out to Sayreville, N.J., with [Robert] Smithson. He said that site had really fabulously colored earth. I went there, and found deep red clay in this quarry. It was soft and rubbed beautifully. After that I started seeking places that had more coloration, like the West. I sought more spiritually charged locations. I believe that places have lives and elements that we don’t know unless we connect with them in some special way.

GAEBE You have traveled extensively, often gathering materials and inspiration from the sites you visit. Which site was most inspirational?

STUART It’s such a non-exotic place, but Sayreville, N.J., was a wonderful site. That site lent itself to quite a few works. I’ve done pieces in the American West, and in Copán, Honduras, in the Yucatán, the Galápagos and in Nazca, Peru.

I would go back to New Zealand in a heartbeat. There is something so evocative about New Zealand because the light is so amazing. It’s so far away from everything and so close to the pole. The Orkney Islands north of Scotland have incredible standing stones—archeologically it is one of the most beautiful spots. These tall, elegant standing stones in circles, some of them standing alone in an incredibly flat landscape. The place has this very transparent light; it’s the kind of light you pray for.