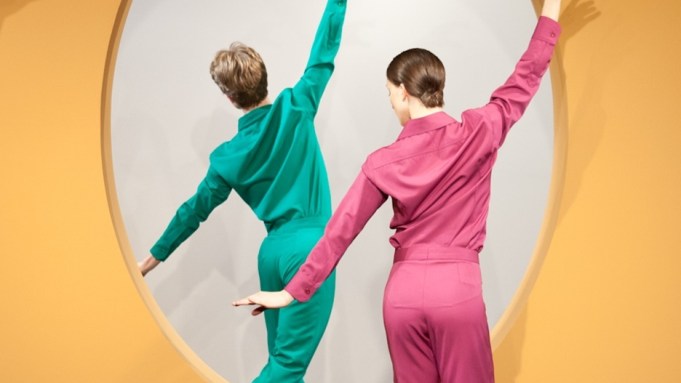 Next Thursday, Elad Lassry’s performance, Untitled (Presence), will debut at The Kitchen. Lassry staged an earlier iteration of the work at the Hayworth Theater in LA in March, as a prelude to an exhibition at David Kordansky Gallery. The performance in New York is part of an exhibition of new photographs, sculptures and a film by the artist, also at The Kitchen. This show is the first to which The Kitchen has given over both its downstairs and upstairs spaces. “I’m interested in the performance functioning as a piece within my exhibition,” Lassry told A.i.A.

For the performance, 10 dancers from the American Ballet Theater and the New York City Ballet will repeat corps de ballet choreography from iconic ballets on a silent stage divided into thirds—three parallel receding sections—defined by lighting.

Lassry explained that he intends the three “fields” of the stage, lighting, and especially the dancers’ repetitive movements to affect viewers’ sense of depth and perspective. He described the effect as “a metaphor to the act of focusing.” “[The dancers’] movement in space keeps reestablishing that focus,” he wrote. “The human eye has to make choices, and distinguish the human subjects from the props.”

The “props,” or set pieces, which Lassry designed for the performance, function as apertures, framing and centering the dancers. They are similar to the sculptural pieces that will be installed in the galleries. Over 20 new photographs are also part of the exhibition, as well as a new abstract video work. Lassry captured another dance performance in his film Untitled (Ghost), 2011; the new video is Lassry’s first abstract film.

The performance complements Lassry’s photographic, filmic and sculptural work; it explores and represents themes that pervade Lassry’s oeuvre: “I’m thinking of the performance as something that toys with the ideas I have been introducing around the contemporary picture: an odd unit, something that is so much like, and drastically unlike, the way we see.”

Untitled (Presence) will be performed at The Kitchen on Sept. 13, 14, and 16, at 8:30 pm. The exhibition opens Sept. 7. Tickets for the performance can be purchased at The Kitchen’s box office or at thekitchen.org.