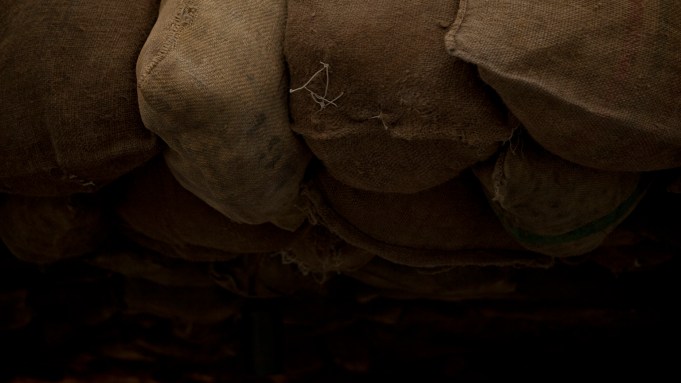 It is 10 AM at Paris’ Musée d’Art Moderne, and severe-looking journalists are pouring in. The main exhibition is filled with suspiciously familiar pieces: a urinal, coal bags, a projection of a nude descending a staircase. It’s not the ghost of Duchamp guiding the group (or even an advocate of the estate), but a tiny ageless woman in silver sneakers with fluorescent orange nails. Elaine Sturtevant, rumored to have been born in 1930 although her age remains mysteriously unconfirmed, has (ironically) made a name for herself by creating replicas, identical in size, technique, material to instantly recognizable works by artists like Andy Warhol, Frank Stella, and Marcel Duchamp.

Sturtevant’s current retrospective at Paris’ Museum of Modern Art, quirkily, appropriately called the “The Razzle Dazzle of Thinking,” salutes a career-long repudiation of the authenticity that has remained sublimated in late 20th Century art.

The exhibition includes an exact reproduction of, as the title indicates, Duchamp 1200 coal bags (1972). Like the original (1938), the installation involves a darkened, cave-like chamber hung with 1200 supposedly coal-filled canvas bags—exactly as it was originally installed. The room is lit with a single light bulb and filled with canonical readymades like Bicycle Wheel and Fountain. Sturtevant’s copy has a transcendental effect on the once-shocking toilet, reinscribed as both a art object and a collectible because it’s subject to fraud. Interestingly, while Duchamp’s version is world-famous today, Sturtevant made the replica of the room in 1972 when the artist and his work was relatively less well known—a hallmark work yes, but not yet the symbol for the successes and failures of the avant-garde in its entirety. Another work copies exactly Haring’s abstract motifs, which appeared throughout the 1970s on New York’s subway billboards. Carefully crafting graffiti-like impressions onto canvas alienates the original piece from its spontaneous, illegal gesture

A first for Sturtevant is House of Horrors (2010), a life-size ghost train where visitors can ride in carts, two by two, through a ride filled frightening, nightmarish characters. This piece was made for the show, and demonstrates a greater level of freedom in her source material, and focused examination of the parameters of spectatorship, viewrship, and audience.

French critics have often described Sturtevant as a predecessor to the appropriation artists of the 1980s who used outright copying as a mode of interrogating notions of authenticity and the Oedipal succession of great art masters. Yet “appropriation” is a label Sturtevant strongly rejects. Sturtevant’s rejection of authorship extends to a conflation of her works with the originals she copies. For Sturtevant it is not mass production, or the mechanical capacity to recreate work and labor endlessly, that is at stake in verisimilitude. She is a classically trained and skilled painter, sculptor, photographer, and all her pieces are made in the same technique as the originals. And while appropriation artists generally re-deployed famous pieces to re-direct their extant hegemony over visual consumption, Sturtevant’s choices have been prescient but not oriented toward game. Joseph Beuys was unknown to the public when she discovered his work, such as the Fat Chairs (1964), that she then reproduced and first showed in 1974, prior to his later fame. Rather, she questions the singularity of experience, a strategy with far-reaching implications for our understanding of time and place.

THE RAZZLE DAZZLE OF THINKING IS ON VIEW THROUGH APRIL 25. THE MUSEE D’ART MODERNE IS LOCATED AT 11 AVENUE DE PRESIDENT WILSON, PARIS 75116.