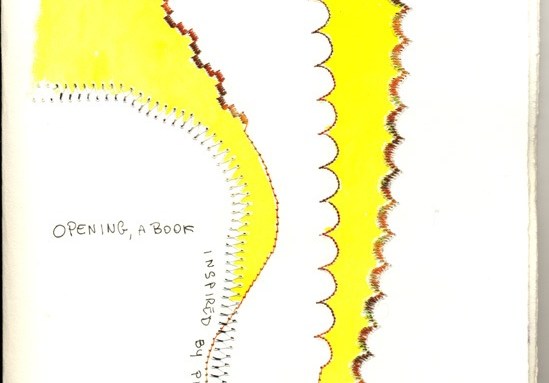 The performance work of Elena Berriolo, the Italian-born New York-based artist known for her unique hand-sewn books, involves investigating the books’ constructions. Since 2009, she has focused on artist books and small editions. In a book a page is one side of a two-sided sheet of paper is part of a recent series of books inspired by music that was on display at New York’s BravinLee Programs, where Berriolo performed Two Sided Concerto: a Performance with Sewing Machine and Piano on the show’s closing day, May 5. She collaborated with pianist Edith Hirshtal in an engaging duet.

A long engagement with the concept of the “the fold,” as identified by Gilles Deleuze in his book The Fold, Leibniz and the Baroque (1988), informed Berriolo’s early sculptures and installations incorporating sewn fabric and feminine forms. Performance was also integral to earlier works such as Empty Body (1998), in which a tall, tent-like room made of muslin enclosed a simple swing, which participants were invited to use.

At BravinLee, Hirshtal played selections from her classical music repertoire as Berriolo sat near her at a sewing machine, stitching a translation of the music. Silence also played an important role for both players through the pauses, stops and starts of the machine and piano. Pushing the paper through the sewing machine, in tandem with the music, became a sort of dance.

Berriolo, captivated by the music, managed to translate the notes into a tangible drawing stitched into the paper. This is the opposite of a score, where the musician translates the visible page of a score into invisible music.

The 16-page books Berriolo has recently made by sewing directly on the pages, then painting them with watercolor. Berriolo’s work reflects her ever-growing passion for print, and for protecting it. “I believe that the book as we know it will never die, and more, that it will grow and will become as beautiful and precious as it was at its beginning,” she writes on her website.