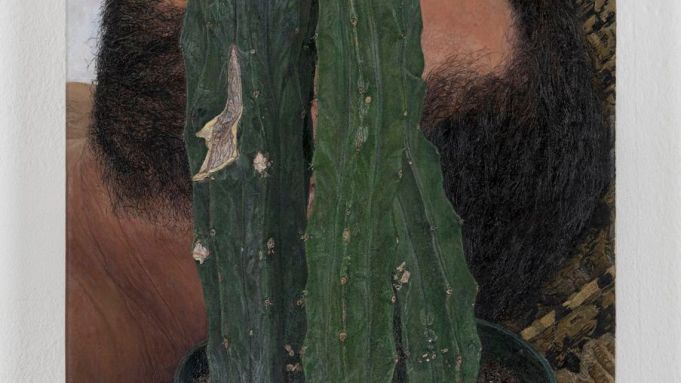 When the New York Times interviewed Ellen Altfest in 2005, it was for a story about the popularity of nude modeling sessions among young New York artists. For several years, Altfest had been painting richly textured still lifes with trees, cacti and twisted hunks of driftwood. Now, she said, she was considering forays into portraiture. There was just one problem with the sessions, she joked: all these naked women were getting a bit boring. When would they get to paint men?

It was a prescient glimpse into the direction her career would take. In 2006, Altfest embarked on a series of photorealistic paintings of nude males, some of which will be on view in her first solo museum exhibition, “Head and Plant,” opening May 6 at the New Museum.

Each of Altfest’s small-scale nudes (the largest at the exhibition is 16 by 25 inches) is a bit of male anatomy—a nipple, an armpit, a plumber’s crack or genitals framed within a bent knee. Her subjects’ bodies are rarely toned and always hirsute–nothing waxed, nothing androgynous. She only paints from life.

But if her male nudes are a challenge to glossed and gendered ways of seeing, her recent work is less a critique than a product of her fascination with texture, she says. “I think I enjoy in a weird way painting all that hair,” she says. “I didn’t want the ambiguity of the feminine. I wanted it to be very male, and to me, body hair is very male. I’ve always enjoyed painting texture and something smooth has been less interesting.”

It seems antiquated that painted nudes could make some of Altfest’s audience uncomfortable in an era of high-def pornography. But they do. “It can be a little confrontational to see these things you’re not used to seeing every day,” she says. “I think people are really comfortable with paintings of women; it’s just more accepted.”

Critics have frequently compared Altfest’s canvases to those by other realist, figurative painters, from Andrew Wyeth to Lucian Freud. More interesting parallels have been drawn to Jackson Pollock. Superficially, the comparison is counterintuitive: Pollock’s works were large—as much as 17 feet wide—and abstract, the opposite in many ways from the hyperrealism of Altfest’s much smaller paintings.

But closer inspection of Altfest’s work reveals abstract surfaces in the painstaking details of the swirling body hair around the nipple, or in the whorls, undulations and repetitions of a table piled high with rotting squash. There’s an exuberance in the tangled, magnified chaos of her subjects, a natural rhythm that emerges. Paraphrasing what Pollock said of his own work, they aren’t paintings of nature, they are nature.

“I’ve always had that element of controlling the uncontrollable or something organic,” she says. “A good painting has to have a good foundation, like an abstract quality. Because otherwise it’s just a painting of an interesting thing you happened to paint. And that’s not the same thing as an interesting painting.”