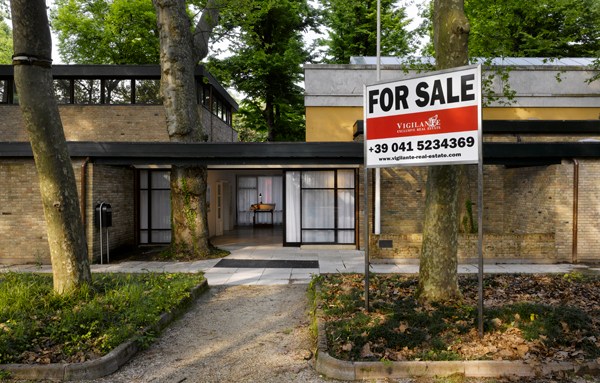 “Ingar [Dragset] and I like simple ideas,” explained Michael Elmgreen of the artist duo, Elmgreen & Dragset at the Danish and Nordic Pavilions’ opening ceremony at this year’s Venice Biennale. “When we came to the Giardini, we looked at the Nordic Pavilion, and we said, ‘Well, we would love to live here, but it’s really difficult to make a show.’ And then we went home, and thought about it and we said, ‘Let’s make a living space.’ And that’s how it all started.”

The Berlin-based pair have extended their collaborative artistic practice to curate this year’s exhibitions in the neighboring Danish and Nordic Pavilions (which includes Norway, Sweden, and Denmark) an unprecedented merging of two international exhibition venues. Employing Carl Brummer’s 1931 neoclassical Danish pavilion and Peter Koch’s 1960s modernist Norwegian pavilion as their points of departure, Elmgreen & Dragset have re-envisioned these historic platforms for the public display of art as intimate domestic backdrops for the private presentation of works owned by two fictional collectors. As its title suggests, “The Collectors” explores the psychology of art collecting and investigates how art collections function as “portraits” of their owners. The project also destabilizes the boundaries between public and private space while celebrating the obsessive desire to surround oneself with beautiful objects. To accomplish this task, Elmgreen & Dragset have invited 24 artists and designers, both emerging and long-established, to populate the interiors of these two properties.

The artists have proclaimed that these pavilions are for sale, a fact confirmed by the “For Sale” sign displayed prominently in front of the Danish Pavilion. There are also occasional real estate tours of the space led by a performer playing the role of Denise Foxwood, a realtor from the  “exclusive” Vigilante Real Estate Company. As Ms. Foxwood leads visitors through the Danish Pavilion’s library, bedroom, terrace, living room, den, and kitchen, she leaks personal information about the family that formerly inhabited the “residence.” For instance, the family’s teenage daughter — represented by Klara Lidén’s charcoal-colored structure, reminiscent of a burnt bunk bed — is described by Ms. Foxwood as a “troubled Goth,” and she explains that Maurizio Cattelan’s taxidermied terrier is the immortalized beloved family dog.

Elmgreen & Dragset encourage visitors to sit on their furniture, to handle their books, and to actively engage with their objects and spaces. This endorsement of audience interactivity, as well as their advocacy of alternative modes of presenting art are commendable. Yet, while their approach to curating-as-art practice is to be lauded, the execution of the Danish Pavilion is a disappointment. It comes across as a disparate hodgepodge of unrelated objects. The narrative provided by the real estate agent is overly didactic and unnecessary, as one can draw conclusions about the inhabitants without her hokey interpretations.  As a whole, the installation would be more successful if more were left to the audience’s imagination.

In contrast, the Nordic Pavilion is much more cohesive and aesthetically sophisticated. Its minimalist interior reeks of the clichés of Nordic design. Wood, glass, and 1960s minimalist architecture and furnishings converge in what Ms. Foxwood describes as the “well-appointed, but unusual” home of one Mr. B, the proprietor of this swanky bachelor’s pad. While the rubber corpse floating in the Hockney-esque pool in the front yard is again too contrived, the objects and perfomers inhabiting the interior work nicely in concert.  For instance, the live male nude model languidly lounging in an Arne Jacobsen OX Chair, and the pair of boys lying together and watching TV in the PK 80 daybed by Poul Kjaerholm, echo Wolfgang Tillmans’ large-scale black and white photograph depicting several well-endowed reclining male nudes.

The most pleasurable piece in the space is the glass-encased “Hockney Bathroom” where Elmgreen & Dragset’s sink, mirror, and shower installation Marriage is on view. Nestled among tree trunks that penetrate the building’s architecture, and perched upon a bed of clean white pebbles, is an identical pair of porcelain sinks, joined together through a twisting hose of stainless steel piping. Yet, despite Elmgreen & Dragset’s playful humor, in some ways the exhibitions feel like witty one-liners, leaving one craving more profound ambiguities below the polished surfaces.

In a 1998 interview with Hans Ulrich Obrist, Elmgreen discussed being influenced by Felix Gonzalez-Torres’ innovative use of Minimalism to disrupt stereotyped images of gay men. Yet, in the Nordic Pavilion’s celebration of a certain gay male aesthetic and lifestyle, it also reinforces these stereotypes. Furthermore, in merely playing, there is almost a sense of apathy that lacks the critical stance of other work, such as their Powerless Structures series. Even so, the absence of the collectors themselves does seem to render “The Collectors” a commentary, in part, on the recent collapse of the art market. In a recent interview, the artists were asked if the artists in the show were people whose work they would want to own themselves. “Yes – if we could afford it,” they responded.