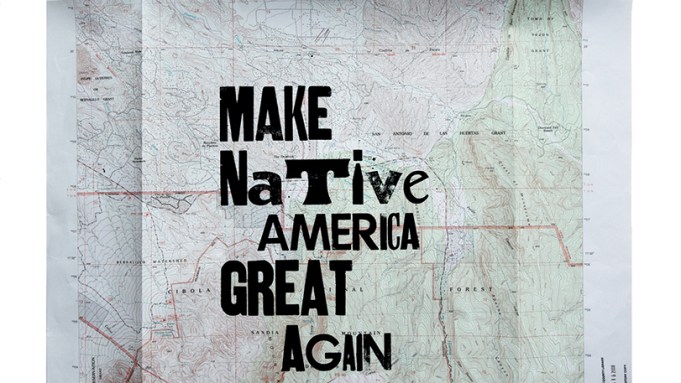 DEMIAN DINÉ YAZHI´ is a Diné (Navajo) artist born to the clans Tódích´íí´nii (Bitter Water) and Naasht´ézhí Tábąąhá (Zuni Clan Water’s Edge). Raised in Gallup, New Mexico, he is currently based in Portland, Oregon. Rooted in a queer Indigenous feminist political praxis and a feminine warrior aesthetic, DinéYazhi´ refuses to acknowledge a distinction between mediums; indeed, he refuses the Western distinction between art and life. His work encompasses research, community organizing, print publication, image and video production, poetry, merchandise, and curatorial projects. He engages all of these in a DIY punk spirit, generating models for Indigenous community collaboration. His work embodies the concept of survivance and stakes its claim to protect Indigenous life, culture, and sovereignty.

Anishinaabe scholar Gerald Vizenor defines survivance as “an active sense of presence, the continuance of native stories, not a mere reaction, or a survivable name. Native survivance stories are renunciations of dominance, tragedy and victimry.” 1  More than just survival, survivance encompasses stewardship of the legacies of Native innovation, as well as nourishing and revitalizing Indigenous culture and forms of knowledge. Narrativity plays a critical role in resisting colonization by anchoring presence with the power of language and ceremony. Across mediums, DinéYazhi´ strives to honor and embody the concept of survivance, generating objects, processes, and contexts that make space for Native healing and urge non-Indigenous people to decolonize.

DinéYazhi´ sometimes appropriates white identity performance in order to express his own Indigenous queer experience. Man-Size (Revisited), 2010, is a split-screen video in which the artist imitates the choreography and gestures in PJ Harvey’s black-and-white music video “Man-Size” (1994). Directly addressing the camera, the solitary female singer adopts a masculine persona—conveyed through facial close-ups and sinewy, muscular movement—to tell a story of obsessive, murderous love. Harvey’s sparse and grungy work, replete with androgynous camp, lays the ground for DinéYazhi´’s ironically distanced exploration of masculinity. Clad only in briefs, he inverts the Western original, encoding himself within it to subvert it.

Indigenous Luv (Hanky Code: The Movie), 2015, is about cruising while Native, proposing an Indigenous addition to the hanky code, a system of communicating one’s proclivities in the gay casual-sex scene. With Helium’s “Honeycomb” (1995) as a soundtrack, the work challenges white queer culture on its erasure of Native people and sexuality. The artist leisurely explores coast and woods with a translucent, almost tulle-like hanky—sometimes white, sometimes blue—flowing from his back pocket or fluttering in his hands. The environs and jangly alt-rock music evoke a forlorn sense of rustic white culture, one of many that Native queers may have to navigate both for survival and in search of sexual connection. Between scenes, against a gray-and-white checkerboard pattern, snippets of text appear one after the other: THERE IS NO HANKY CODE / FOR INDIGENOUS QUEERS / CRUISING ON THE REZ / OR IN COLONIZED CITIES / HORNY AND LOOKING FOR / A POST COLONIAL FUCK / A POST APOCALYPTIC DADDY / A COUPLE OF TWO SPIRITS / TRADING BJS @ THE POW WOW.

DinéYazhi´’s artist and activist initiative, Radical Indigenous Survivance and Empowerment (R.I.S.E.), is dedicated to the teaching, dissemination, and evolution of Indigenous art and culture. The project has engaged the public in a number of ways, including an art, music, and film festival; a poetry zine called Survivance: Indigenous Poesis, currently in its third volume; and a Tumblr site (burymyart.tumblr.com) featuring political graphics that are free to print, repost, or otherwise use. Much of DinéYazhi´’s most accessible work consists of these toothsome images, which are reminiscent of agitprop. All-caps text, bright colors and patterns, and provocative imagery draw the eye to incendiary decolonial messaging meant to proliferate online and in public space. One such graphic consists of a modified American flag with black-and-white stripes and white stars on a red field, with text that reads: OUR GOVERNMENT CONTINUES TO IGNORE THE LIVES, DEATHS AND SUFFERING OF PEOPLE WITH HIV INFECTION BECAUSE THEY ARE QUEER, TRANS, INDIGENOUS, BLACK, HISPANIC, OR POOR. The work speaks to the erasure of nonwhite HIV victims, formatting the text within the American flag in order to implicate the government in their ailment and death. The artist, who often addresses the HIV crisis, coined the phrase “POZ SINCE 1492” to reframe the discussion. His efforts shift attention away from racialized victim-blaming and onto settler colonialism, an ongoing “infection” that physically and conceptually afflicts Natives and other people of color.

“DENE BĀHĪ? NAABAAHII,” DinéYazhi´’s 2016 collaboration with photographer Kali Spitzer at the Portland Art Museum’s Center for Contemporary Native Art, further established his commitment to the concept of survivance. Untitled (Radical Indigenous Queer Feminist Bibliography), a wheatpasted photograph of a stack of books, loomed larger than life over the space. On top of the pile of books sit a rock and a marble-size model of the earth. In a corner of the room, a projector whirred and clicked, revealing every seven seconds another of sixty-nine slides. DinéYazhi´’s photographs were overlain with elliptical phrases: THE LABOR OF COLONIZATION / THE MEMORY OF FORGETTING / THE POLITICS OF SURVIVAL. The exhibition wall text, formatted in an upside-down pyramid, stated: “By entering this space . . . you have agreed to forfeit your misconceptions of Indigenous identity & respect the sacredness of Indigenous traditional practices. . . . You have agreed to become a lifelong agent against humanitarian & environmental injustice.” Reading the text, non-Indigenous viewers were advised of their accountability for justice and sovereignty for Native people.

One installation in the show explicitly materialized the impact of environmental injustice against Native people in light of the sacred relationship with ancestral land. DinéYazhi´ took red dirt and coal from the Navajo reservation. He presented these substances as two single-material sculptures, displayed in separate wall-mounted vitrines. The titles, KA-HA-TENI KAY-YAH and KAY-YAH CAH-DA-KHI TA-GAID AH-CHANH—Native (Native) Land (Land) and Land (Land) Wound (Wound) Without (Without) Self Defense (Protect)—are drawn from the Navajo Code Talkers’ Dictionary in honor of the artist’s maternal grandfather, who served in the US Marine Corps during World War II, sending and translating messages that Axis forces were unable to decipher. The lush, ruddy brown of the dirt contrasts with the lacquered coal, which suggests buried fossils or the deep sea. A wall text explained that the Peabody Western Coal Company extracts an estimated 7.8 million tons of coal each year from ancestral Diné lands. This extraction, which often takes the form of strip mining, provides jobs for the Diné and electricity for the Southwest. But it also plays a significant role in perpetuating Native displacement, health crises, and environmental degradation.

The history of the code talkers testifies to the use of language as a weapon, and DinéYazhi´ approaches aesthetics as a battlefield. However, in his work, language is weaponized for reconciliation; in the exhibition text, he and Spitzer write: “We have traded firearms, atomic bombs, & disease for instruments of creation & resistance in the relentless battle of survival. . . . Through art we construct various routes back home after the battle.” Curatorial poetics of resistance were at work in the show, with a flag rug woven in 1991 by Bertha Harvey mounted upside down, and two sacred Diné objects—a 1930 basket and an 1850 shield—from the collection of the Portland Art Museum displayed in a vitrine with their edges touching. The side-by-side position of these circular items evokes Felix Gonzalez-Torres’s Untitled (Perfect Lovers), 1990, two clocks that start at the same time but eventually go out of sync. While DinéYazhi´ originally wanted the dirt from Diné lands to be in the same vitrines as the sacred objects, the museum staff vetoed the placement of the collection items near the dirt. 2

Having received his BFA in Intermedia Arts from the Pacific Northwest College of the Arts in 2014, DinéYazhi´ has navigated the oppressive colonialism of educational and artistic institutions. That experience, while redolent of centuries of cultural genocide in boarding schools that separated Indigenous children from their families and cultures in an attempt at forced assimilation, afforded the artist access to critical language and a theoretical framework that can be deployed against white institutions. Alienation thus plays out in his work like a haunting, or like fingers hovering over a map as they trace out a potential path. The colonial art world continues to erase Native people and render Indigeneity a memory associated with the landscape of the old American West, as opposed to both an originary and contemporary radical presence that flows within and beyond the reservation. DinéYazhi´ exploits his access to institutional settings to deconstruct the contemporary by affirming the history, present reality, and evolution of Indigenous peoples. He weaponizes his tokenization to bring in people who weren’t invited, and then has his own party.

DinéYazhi´’s BFA thesis exhibition in 2013 was a curatorial project, the first gesture of the soon-to-emerge R.I.S.E. initiative. Titled “Bury My Art at Wounded Knee: Blood & Guts in the Art School Industrial Complex,” it both fit and did not fit the conventions of the exhibition format, providing a space where Native artists could come together and interrogate the manner in which Native work functions in the US art system. In most institutions, the living presence of Native artists is rare, since it challenges the museum’s modus operandi: presenting Native art as artifacts from an idealized past. Rejecting this approach, DinéYazhi´ brought together visual artists, poets, designers, storytellers, and more to showcase contemporary Indigenous work. And just as R.I.S.E. continues facilitating such critical interdisciplinary collaborative spaces, DinéYazhi´ keeps developing a warrior aesthetic focused on community engagement and decolonial work. His art is a reminder that colonization, far from being over, is an ongoing process in which all non-Natives are complicit. We must regard Indigenous survivance as a call to finally begin dismantling settler colonial institutions, renounce the land, decolonize our minds, and make space for Native people to direct the country toward healing.

MANUEL ARTURO ABREU is an artist and writer who lives in Portland.

A Simple Swatch That Once Belonged to Pope Francis Could Fetch $100,000 at Auction