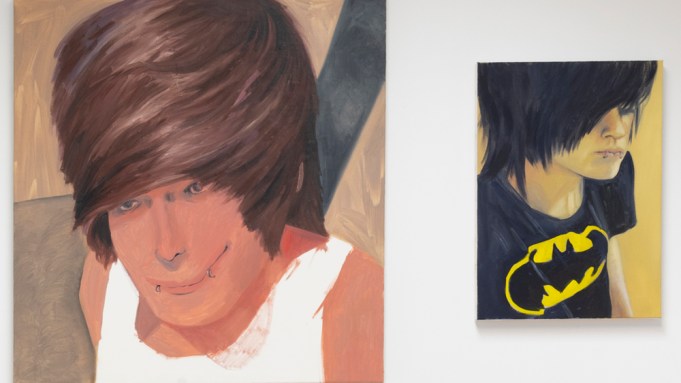 Heartbreak, depression, and misanthropy—these are among the emotional themes explored by punk and hardcore bands described as “emo” by music critics in the 1980s. But the term has been rejected by almost every band it was applied to. This paradox only intensified in the mid aughts when the emo genre went mainstream; its growing army of fans, called “emo kids” or “emos,” similarly begged, “don’t label me.” This vehement rejection of the term is due in part to disparaging and homophobic stereotypes about emo kids based on their genderqueer fashion choices, public performances of emotional sensitivity, and willful identification as misfits. But perhaps most scathing was the condemnation from other nonconformists that emo kids were sellouts buying a prepackaged, apolitical version of punk rebellion from suburban shopping malls. Emo has undoubtedly been commercialized, though artists like Bunny Rogers, Thomas Liu Le Lann, James Gregory Atkinson, and Riley Hanson have grappled with the commercialization of emotion as precisely part of the emo appeal. Rather than nostalgia for a lost paradise of subcultural authenticity, these artists are drawn to the very artifice of popular emo.

In her installations, videos, poetry, and performances, Bunny Rogers not only evokes teen angst and depression, but also the emo icons through which she channeled those emotions at a younger age. These include the melancholic singer-songwriter Elliott Smith, the goth-punk version of Joan of Arc from the animated TV show “Clone High” (2002–03), and the jaded character Gaz from another cartoon series, “Invader Zim” (2001–06). Rogers ties these references to darker aspects of teen life: school shootings, child pornography, and suicide. While the 2019 Netflix-distributed “Invader Zim” feature, Enter the Florpus, is undoubtedly capitalizing on nostalgia, Rogers’s low-budget 3D animation of Gaz reading poetry in the cafeteria of Columbine High prompts a different connection to the past. It is less a trendy return to an aesthetic just old enough to be cool than an effort at capturing a historical moment. In a 2017 interview, she says, “I’m not nostalgic for the rage that I felt as a teenager . . . [but] I don’t want to forget that I felt that way, and that’s where I came from. In a way the art projects, like, archive these feelings.”

Rogers echoes the title of Ann Cvetkovich’s book An Archive of Feelings, which rejects pathologizing theories of trauma in favor of queer strategies of processing and living with it. In dissociating trauma from the individual and the pathological, Cvetkovich draws on the concept of public feelings, a term developed in the early 2000s by academics associated with the Public Feelings project. These scholars argued that feelings are not just individual responses to social and political problems, but “a necessary part of politics and a possible resource” in effecting political change. As an archive of feelings, emo is not just a narcissistic avoidance of the political, but a way to mediate between the public and the private (or to undermine that very distinction). Precisely because of its commercialism, emo makes feelings public in a very tangible way. It offers an aesthetic vocabulary well-suited to addressing how consumer culture mediates our relations with each other.

Thomas Liu Le Lann, whose show “Best Western” is on view at Lubov in New York through November 10, depicts himself and his lovers as limp, cat-eared or bunny-eared dolls made of shiny black and purple vinyl, as if they were oversized toys sold to emo kids at Hot Topic. Like Rogers, he exploits the commercialized vernacular of emo to communicate melancholia, dysphoria, and lethargy.

The exhibition “Rawr means I love you in dinosaur,” which was at Lubov earlier this year, traded in emo aesthetics to explore how technology mediates public feelings. Organized by curator Daisy Sanchez, the exhibition paired paintings by Riley Hanson based on photos of emo kids from obsolete social media networks (such as Myspace or VampireFreaks) with macro photography by James Gregory Atkinson depicting teary eyes wearing decorative contact lenses, a fashion choice associated with the glam side of the industrial, EBM, vampire goth, and cybergoth scenes. Hanson’s renderings extend the styles already present in his source material. The reduced, non-naturalistic palette, dramatic cropping and angles, and soft details recall the formal techniques used in the original photos to amplify their affective charge. The paintings emphasize that these formulaic profile pics helped build community.

Atkinson wittily titles his photographs “Hypersensitive (Blowing things out of proportion),” 2017–18, referring at once to emotional sensitivity and photosensitivity, blown-up images and over-blown reactions. More than a good pun, this linguistic short circuit of materials and emotions reflects how technology mediates affect. While Hanson’s canvases have a mild serenity—even as they edge onto caricature—Atkinson’s photographs are filled with an anxiety consistent with his recurrent investigations of surveillance and social control. Staring down Hanson’s smaller portraits, Atkinson’s large prints seem to ask who is allowed to perform angst in public, and who is criticized for being hypersensitive—for example, because of their race or gender.

If the notoriously commercialized aesthetics of emo have particular resonance today, it may indicate a general awareness that subcultures are highly susceptible to assimilation by the dominant culture, but that they are nevertheless important sites of emotional and political investment. Cultural theorist Stuart Hall emphasizes that struggles over meaning in the discursive battlefields of mass culture include “the struggle over access to the very means of signification.” This is where a commercialized subculture such as emo gains a certain political potential: since emo kids are already implicated as the consumers of mass culture, they have privileged access to the culture’s means of signification, whether they use it for rebellion or conformity. Indeed, as Andy Greenwald notes in his book Nothing Feels Good: Punk Rock, Teenagers, and Emo (2003), the defunct website emomusic.com was once emblazoned with the fitting tagline: “Fuck You MTV: We Love Sellouts!”