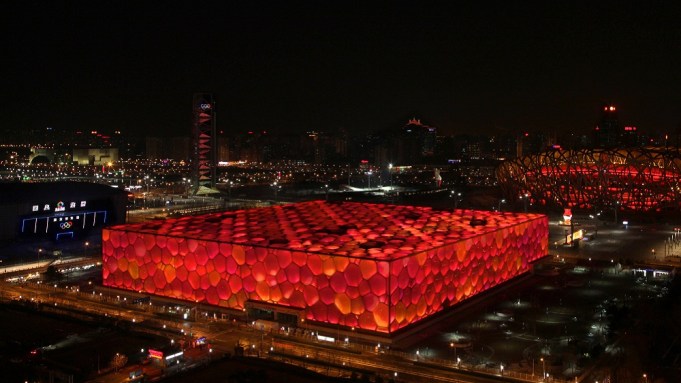 When the Chinese lighting designer Zhen Jianwei asked artist Jennifer Wen Ma in 2012 to work with him on a concept that would give the Beijing National Aquatics Center a facelift, her first thought was that she would like to visualize the energy flow of the Chinese people. Designed for the 2008 Beijing Olympics by a consortium of Australian and Chinese architects, the Water Cube, as it is colloquially known, was inspired by the bubbles in soap foam, and its translucent structure looks less like a building than it does a network of cells seen under a microscope. “The transparency of the structure of the building got me thinking about the lack of transparency in Chinese society,” the artist said in an interview over breakfast with A.i.A. in Beijing recently. “I wanted to create a work that expresses how my people feel.

What resulted from the collaboration was Nature and Man in Rhapsody of Light at the Water Cube (2013), a permanent light and color installation. It consists of a program that collects emoticons used every day by millions of users on the Chinese microblogging site Weibo (the Chinese counterpart to Twitter), and then interprets them to form an overview of the mood of the Chinese people. These moods—anger, happiness, depression, excitement—are expressed in subtle gradients of colors based (somewhat opaquely) on the I Ching. They pulsate and melt in patterns that change daily on the exterior surface of the building, in hues of purple, red, blue and green, like the abstract expression of a society not frequently able to speak out publicly.

After the Olympics ended, the Water Cube was closed for renovations; in 2010, it partially reopened as a water park for the general public. Located alongside the Bird’s Nest, the national stadium designed by Herzog & de Meuron, the Water Cube is a highly visible public monument. The Olympic Park remains one of the most heavily trafficked tourist sites in China, attracting between 20,000 and 30,000 visitors a day, most of them from within the country.

Given the prominence of the site—and its association with the Olympics, which continues to be a source of great national pride—Ma was careful not to push too many boundaries. “The government realizes that expressing emotions like anger could very well be subversive, especially on important political days,” she said in an interview. Later, she added, “Their main concern is maintaining stability and calm at all costs.”

At night, visitors find themselves bathed in an aura of colors that looks something like the Northern Lights. The colors may stir them emotionally; it is not likely that they will foment revolution.

China has a fraught history with public spaces. Unlike Western civilizations, which planned cities around great squares built for massive gatherings, China has long been a society of closed-off palaces and courtyard dwellings. “Confucianism was all about following order,” explained Ma. “You didn’t get up and challenge things.”

When people did gather together, most famously in Tiananmen Square in 1989, the results were often disastrous government crackdowns. But with Western architects being called in to help with planning in Chinese cities like Beijing, parks and public art installations are becoming more commonplace. Given these changes, supporting a project like Nature and Man in Rhapsody of Light at the Water Cube seems to be a calculated concession to allow people to feel as though they have a voice—without that voice being too dangerous.

Ma herself is a good face for the project—not only is she lovely and eloquent, she’s also something of a national treasure. Born in China, she moved with her family to the United States when she was 12. After receiving her MFA from Pratt, she worked in the studio of Cai Guo-Qiang, the Chinese artist most famously known for his work with gunpowder. She went on to become the chief designer of visual and special effects for the much celebrated 2008 Beijing Olympics Opening Ceremony. Zheng was the chief designer for lighting on the Olympic Green. As a result, each artist is a symbol of Chinese artistic accomplishment.

That doesn’t mean that Ma is not aware of the social unrest in her native country. “There will be change here,” she said. “But people are not calling for revolution. They are not saying on the streets, ‘We want democracy.’ They are saying, ‘Give us fair housing.'”

Housing is an issue in the creation of public spaces—often, entire blocks of old neighborhoods are decimated to make way for new projects. “There’s never a mention of community in the work that I do,” said Ma. “The companies who fund it don’t talk to the people.”

This practice is in marked contrast to Ma’s experience working with the Lower Manhattan Cultural Council, for whom she is building an installation on Pier 42 along the East River. There, she said, the neighborhood is constantly involved in decision-making—much of her time is spent in meetings with the local community.

In China, the community’s voice is slowly emerging. Perhaps more cautiously than outspoken artists like Ai Weiwei, it’s as though Ma is testing the waters to see what language is safe to use. “I’m doing this for my people, rather than against the government,” she said. It remains to be seen whether the people pick up on the potential subversion in the piece or whether it serves only to beautify.

Car of the Week: This Rare Briggs Cunningham 1963 Jaguar E-Type Is Revving Up for Auction

My Beard Is a Decade Old, and I’m Begging My Bearded Brethren To Use This $15 Beard Care Tool