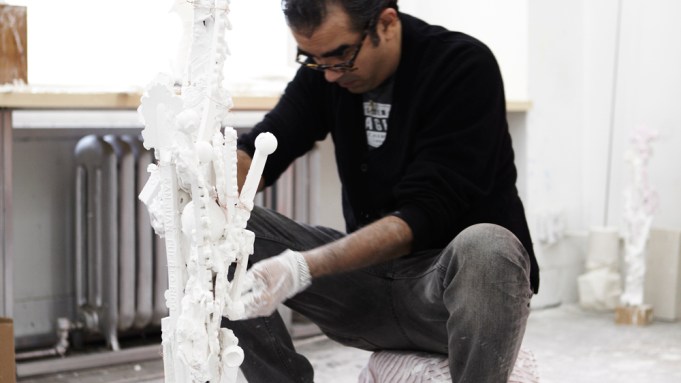 “I’ve had a secret studio on Long Island where I’ve been sculpting for five years,” Perez told A.i.A. in a conspiratorial tone at a preview of the show yesterday. “It’s just recently that the sculptures started to make sense.”

As they have for years, Modernist-era Caribbean hotels continue to command Perez’s attention, and they form the subject of both the canvases and the sculptures in the Acquavella show.

“I’m an architecture groupie,” the artist said. “So this is my version of painting Hollywood stars.” (Also currently on view is his exhibition “Utopia” at the Corcoran Gallery, Washington, D.C., through Feb. 10, with paintings of the Marina Towers in Chicago and of D.C.’s Watergate Hotel.)

His 2011 show at Acquavella saw him picking up the brush for the first time in some 17 years. His process had involved applying pigment to sheets of paper using an oil stick, then placing the paper against the canvases and applying pressure to transfer the pigment, and he still works this way.

In a 2009 interview, he described this process as his way of dealing with the legacy of Warhol’s printmaking. But he’s added the brush to his toolkit. “I was known for making pictures without a brush,” Perez said. “And who gives a shit about that?!”

The paintings of Caribbean hotels refer, among other things, to colonialism, via the names affixed to them, like the Normandie, the Pierre and the Mandarin. The modernist architecture, as per the title of his Corcoran show, recalls utopian dreams. In the new paintings, the architecture that Perez used to reproduce in loving detail is practically vanishing into abstraction. “Colonialism was not exactly a success,” he deadpans.

There’s also a love story behind the artist’s first portrait of a Caribbean hotel, from a decade ago. He had fallen for a French woman, who was at the time married to another man. So he started by painting San Juan’s Normandie Hotel. “It’s designed by a Puerto Rican architect, and has a French name, so it was a secret love letter.” The French woman is now his wife, and mother to their five-year-old son.

The sculptures grew out of the artist’s extensive collection of swizzle sticks—which, it so happens, were invented in the West Indies, Perez says—many of them from the same hotels that appear in the paintings. Like his earlier depictions of Puerto Rican rum bottles, they have elements of boozy self-portraiture. “I used to do a lot of drinking,” the artist admitted.

He has the swizzle sticks scanned (“I use the same guy Jeff Koons uses—he’s expensive but he really gets it right”) and then assembles the sculptures out of multiple white plaster versions of the sticks.

They are gangly, messy, elongated works, mostly about 2 to 5 feet high and standing on wood or stone bases. They can recall Giacometti’s elongated figures. The names of the hotels often appear in raised letters, and their logos frequently adorn the top of the sticks. A tiny, foreshortened Hotel Normandie rests at the peak of one seemingly top-heavy sculpture, and the female nudes that stand for Club La Red, Havana, are repeated along the full length of another, making it look like some kitschy fountain.

“They are a painter’s sculptures, so I approach them via collage,” Perez said, referring to his process of assembling the sticks into new forms. “And collage to me is a painterly process, not a sculptor’s process,” he added.

Among the painter-sculptors he admires are Picasso, Degas, Cy Twombly and Julian Schnabel. “And of course I was thinking of Schwitters too,” he adds. Some of the structures are supported partly by wire, because he’s admittedly no good at building self-sufficient structures: “I’m just a painter.”

“But I really don’t want to be a complacent figurative painter,” Perez added, explaining his urge to challenge himself with a new medium. “If you’re making complacent work, whether for the sake of theory or the market, deep down you’re going to know it.”