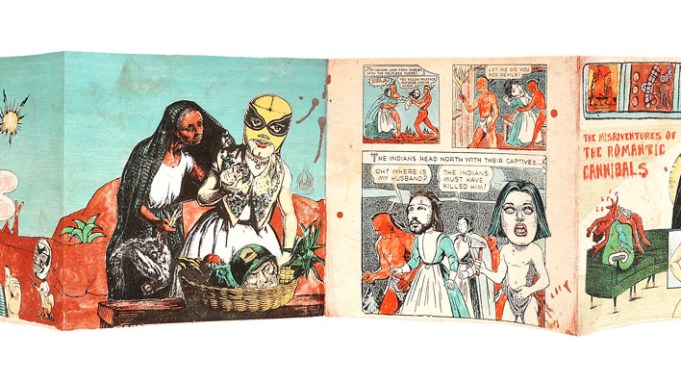 An unlikely friendship has developed over the past five months between Bay Area artist Enrique Chagoya, known for his irreverent political imagery, and Jonathan Wiggins, an evangelical pastor from Loveland, Colorado. This small town made headlines in October when Kathleen Folden, a 56-year-old trucker from Montana, drove there and destroyed  a work by Chagoya in an exhibition at the Loveland Museum/Gallery.

On Oct. 6, Folden, wearing a T-shirt that read “My Savior is Tougher than Nails!” entered the museum, which was exhibiting a survey of prints produced by various artists at Shark’s Ink, a collaborative workshop in Lyons, Colo. Wielding a crowbar, she broke the glass in a case containing The Misadventures of the Romantic Cannibals (2003), Chagoya’s lithographic scroll, which had been called blasphemous by some Christian groups, and destroyed the piece. On Nov. 19, she pleaded guilty to criminal mischief and was sentenced to probation and counseling. (A decision regarding financial restitution to the museum is pending following a Feb. 16 hearing.)

In the days before and for months after the destruction of his scroll, Chagoya, who teaches at Stanford University, experienced constant harassment, including death threats (as did the staff of the museum, which was being picketed, and Bud Shark, the proprietor of Shark’s Ink.) “I received hundreds of e-mails,” Chagoya told Art in America. “The Catholic League had blasted my book on the first page of their website, and Fox News gave the guy who organized the protest a full three minutes.” Soon after, the artist had a solo show at Bing Stanford Art Gallery in Washington, D.C.; a lecture he delivered in conjunction with the exhibition was overseen by police. (Chagoya has created a Goya-esque series of drawings, “Ghostly Meditations,” expressing the emotional turmoil he felt at the time. A few are among the works currently on view in “Enrique Chagoya: Surviving Paradise/Sobreviviendo el Paraíso,” at DiRosa Preserve Gatehouse Gallery in Napa, Calif., through Apr. 16.)

Suddenly, “in the middle of all the hate e-mail,” says Chagoya, “I got a friendly e-mail asking me respectfully about the work.” The sender was Wiggins, a young minister four months into his position as senior pastor at the Resurrection Fellowship Church in Loveland. He had been asked by a member of his congregation of 3,000 why he was not encouraging people to join the protests. “It was just one parishioner,” says Wiggins, “but how can you do nothing, with the level of responsibility you have?” The story had gripped his community, but Wiggins says he was surprised that, upon asking his congregation who had seen Chagoya’s scroll, only around 10 percent raised their hands.

Wiggins did some research on the Web, and then contacted Chagoya via e-mail. The story of their ensuing correspondence is related in a sermon Wiggins delivered at his church, which can be viewed in its remarkable entirety online. It is titled “Jesus-Tougher than Nails,” playing on the phrase on Folden’s T-shirt. “I was troubled by the idea of that phrase being associated with such violence,” Wiggins remarks to AiA. “I thought to myself, ‘If Kathleen Folden really believes Jesus is tougher than nails, why would she feel the need to defend him by attacking that lithograph with a crowbar?'”

In his sermon Wiggins reads from his correspondence with Chagoya. The pastor began by asking the artist to explain the offending image. It is a signature Chagoya exquisite-corpse-type collage, with the head of Christ on the body of a woman and, near the crotch—in a detail that led the protesters to misinterpret the scene as Christ being fellated—another head of a figure sticking its tongue out, borrowed from a Mexican comic book.

“In 2002,” Chagoya says, “when I started working on the scroll, the pedophile scandal in the Catholic Church had just broken in the press. I intended the figure to express the corruption of something spiritual. There was no nudity in the scroll, no touching at all.”

The pastor was himself disturbed by the image. In the sermon, he says his response was adamant: “This is not my Christ.” Wiggins immediately understood that this was a representation; for him, Christ is real, whereas the image was metaphorical. This despite his modest demurral: “Listen—I have no idea how you’re about to take this, but four or five years ago I was living in a trailer park. Fine art and I are not connected at all.”

“If I understand his explanation,” continues Wiggins, “the image was mainly a critique of the Catholic Church. I would include the Protestant church as well. We’ve messed up a lot of things, too. But people in my tribe were taking it to be an assault on the person of Jesus or the idea of Christianity.”

After a period, Wiggins and Chagoya—who have yet to meet in person—reached an understanding about their differences, and developed a warm regard for each other. Wiggins grew curious about what a depiction of a loving Jesus by Chagoya might look like. So Chagoya offered to paint one and donate it to the congregation, if they would accept it. During the sermon, when Wiggins presented the offer, his parishioners enthusiastically accepted, rising to their feet and cheering. “Enrique was not attacking Jesus,” said Wiggins in the video. “To have him do an image of an uncorrupted Jesus would at least show people in my world the truth. For context’s sake, I thought maybe we could do something that would be more of a commentary on Jesus himself.”

“I’m not religious,” notes Chagoya firmly. Presently, he is nearing completion of the painting, 80 by 60 inches, depicting a Christ of the Resurrection (selected as an iconography because of the name of Wiggins’s church). Chagoya’s painting shows the resurrected Christ holding a banner emblazoned with the word “love.” “I looked at many renderings of Resurrections from the Renaissance and the Mexican Baroque,” says the artist. “I wanted the face to be calm and peaceful, powerful. Jonathan had sent me a quote from the Song of Solomon—’His banner over me is love.’ Typically, in scenes of the Resurrection, the banner has a cross on it, in the style of the Crusaders. I didn’t want to paint that.” The underpainting is completed, but Chagoya will now make a few changes based on some requests from Wiggins, who asked him, for example, to place Christ before a cave rather than simply over a tomb.

Wiggins had planned, upon receiving the painting, to loan it to the Loveland Museum/Gallery but last week he decided against it. “It was out of respect for Enrique,” he explains, because the artist had expressed anxiety about publicizing the gift. “I had the feeling,” says Chagoya, “that it would ignite the controversy again. And, in fact, right after the loan was announced, I got another hate e-mail. My life had just been returning to normal.”

Wiggins, too, has been threatened, though more obliquely than the others. “I’ve experienced nothing like Enrique, or Bud [Shark],” says the pastor, although the website Sad Hills News posted pictures of him and his wife. “And they wrote something like, ‘Be sure to show these quote-unquote Christians how much you quote-unquote appreciate them.’ That was unsettling for me. A church, especially a large church—any auditorium, any public lecture—it’s not the safest venue. I did have a couple of police officers in plainclothes there just looking around. I wanted to be cautious when I was speaking.”

Wiggins plans to install the painting in one of the church’s foyers. “It’s a personal gift to Jonathan and his congregation,” observes Chagoya. “It is a painting about civility: that’s the meaning for me.”