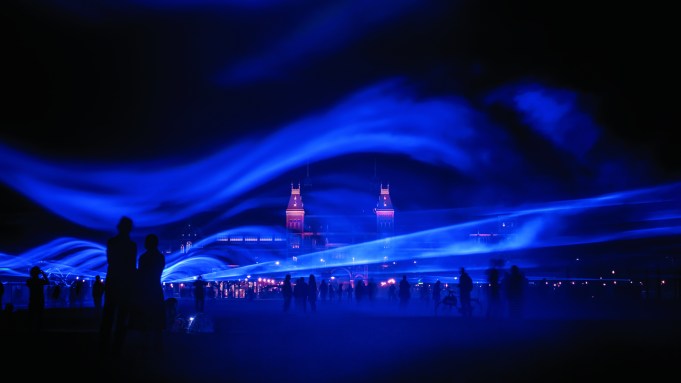 Daan Roosegaarde—artist, designer and futurist—opened his 2015 talk at the World Economic Forum in Davos, Switzerland, with a film of undulating waterways, vibrating grasses and a stormy, painterly Dutch Golden Age sky. He talked about growing up in Nieuwkoop, Netherlands, and how that memory is still powerfully at the center of his understanding of nature, beauty, himself and his work. But lest we romanticize the scenes before us, he quickly made a factual point. Since one-fourth of the Netherlands is below sea level and 60 percent is susceptible to flooding, what we were seeing was an aquatic engineering wonder, made possible by dikes, dams, wind-driven water pumps (i.e., windmills), canals and floodgates. Technology has controlled Holland’s rivers and kept the sea at bay, thus allowing agriculture and commerce to flourish.

For Waterlicht, presented at several European locations last year, Roosegaarde projects blue LED light into urban spaces at night to create a vaporous layer of “water”—a virtual sea at the level the ocean would be were it not restrained. Of course the work is also a cautionary allusion to the height—usually well over human heads—that the water could reach with climate change. (In each case, the level of the projection is determined by the local water board.) Nature, at least in the Netherlands, is a glorious but highly regulated construct.

Context, place, point of origin and their relationship to technology are all crucial to the “techno poetics” of design, as Roosegaarde calls his approach. Dune, an interactive installation, was the first Roosegaarde piece I encountered live. In a darkened room off the main hall of the World Economic Forum Conference Center, various dignitaries waved their arms over a fanciful garden of flexible plastic reeds with white LED tips. They were demonstrating what they had just learned from Roosegaarde: human interaction could trigger the reeds to light up the room.

This piece was perfectly suited to such a relatively confined setting, but most of Roosegaarde’s work is site-specific to large public spaces—rural and urban—including parks, countryside, walkways, plazas, airports, train stations and highways. At Amsterdam’s main railroad terminal, his Rainbow Station (2014-15), using liquid crystal lenses developed in collaboration with astronomers at the University of Leiden, separates light into a spectrum and beams it across the tracks, where it takes the shape of the roughly 150-foot-wide station roof. Throughout 2015, the “rainbow” appeared nightly at sundown, at an undisclosed moment, to mark both UNESCO’s International Year of Light and the 125th anniversary of the Amsterdam Central Station.

In conversation, Roosegaarde cites many influences for his work: Buckminster Fuller, Marshall McLuhan, Leonardo da Vinci, Rem Koolhaas and Salomon van Ruysdael. Clearly an environmental artist, Roosegaarde is also profoundly interested in the Land art movement. He is particularly familiar with the earthwork Broken Circle and Spiral Hill, which Robert Smithson sited in a working sand quarry in Emmen, Netherlands, in 1971.

In the 1970s, Smithson, Walter De Maria, Michael Heizer and others strove to create a new purity of form. Needing to escape what Smithson called the “cultural confinement” of galleries and museums, which these artists felt “neutralized” art-making, they sought something bigger, more dramatic and more immediate. 1 But their work, which came to define site-specificity, was never really public art. It has always been remote and difficult to see, with the exception of such relocated pieces as Heizer’s 2012 Levitated Mass (a boulder positioned threateningly above a troughlike concrete walkway at the Los Angeles County Museum of Art). In general, Land art—in works like James Turrell’s Roden Crater (1974-ongoing)—is not just placed in the landscape, it is of the landscape. Smithson, for one, did not want to create embellishment. He sought to “recycle” land that had been abandoned or negatively altered, and to transform it into art. 2

Operating outside of the gallery system that these artists challenged, Roosegaarde has adopted many of their goals and methodologies—such as the use of industrial materials, the emphasis on process, the collaboration with construction companies and large-scale industries, and the direct allusion to nature. But Roosegaarde has transcended Smithson’s caveat that “utility and art don’t mix” 3 and has demonstrated that good art, like good design, can be extraordinarily beautiful while also addressing real-world problems. “I’m looking for a balance between poetry and pragmatism,” he says, “which I think should be the role of the designer/artist.” 4

In a time when we bemoan the impact of humans on the natural world, Roosegaarde’s interventions literally illuminate both the rural and the urban landscape. Many of them exemplify sustainable design, seeking not only to reduce the amount of energy used but also to generate their own energy. He imagines how, like jellyfish, they might light themselves—thus “doing more, instead of less.” 5

Early in the development of such ideas, Roosegaarde and his studio designed Sustainable Dance Floor (2008). The dancers’ movements, activating embedded sensors, lit up a multicolor platform in the once-popular Club Watt in Rotterdam. In Nuenen, Netherlands, where van Gogh lived for a time, Van Gogh-Roosegaarde Bicycle Path accumulates solar energy during the day to energize photovoltaic stones lodged in concrete, which then pattern the pathway with glowing swirls reminiscent of Starry Night. This very popular evening bike route opened in November 2014, pre-launching last year’s commemoration of Van Gogh’s death 125 years ago.

Roosegaarde’s Smart Highway was named Best Future Concept at the Dutch Design Awards in 2012. Working with the Heijmans infrastructure development company in the Dutch province of Noord-Brabant on the Belgian border, Roosegaarde—inspired in part by Yves Klein, who made his own paint 6 —created a photoluminescent mixture that lights up 150 miles of highway lane lines after dark. The paint is charged by sunlight during the day and by headlights at night (not unlike the glow-in-the-dark stars in children’s bedrooms). The lines radiate green—the color that is easiest to see after sundown—and remain visible for eight hours. Their glow is so bright it could eliminate the need for streetlights.

Roosegaarde’s multipart “Smog Free Project”—perhaps his most complex and utopian undertaking to date—opened in Rotterdam on Sept. 4, 2015. A white, 23-foot-high, solar-powered vacuum device, resembling an elegantly slatted vertical beehive with panels that open from the top, sucks in pollutants to such a degree that the air in the surrounding area becomes measurably cleaner and healthier to breathe. Roosegaard’s machine, the Smog Free Tower, which uses as much energy as a household vacuum cleaner, is dramatic, playful and somewhat extravagant. It is clearly not, in itself, a solution to the world’s pollution problems, but it is an emissary of hope, allowing us to imagine that we could someday remedy the global crisis through an audacious and confident use of technology.

Many of Roosegaarde’s supporters were in attendance at the opening of the “Smog Free Project”: the mayor of Rotterdam, officials from the Port of Rotterdam, art- and business-world collaborators, and personal friends—all interested in environmental concerns; the intersection of art, design and technology; and the future of the city as a center for innovation. Present, too, was a Studio Roosegaarde jewelry artist who was turning the black soot we breathe every day into rings and cufflinks—another component of Roosegaarde’s innovative project. The pollutants sucked into the Smog Free Tower are harvested and then compressed to form miniature cubes, which are placed in a setting, trapped in clean air and sealed in acrylic. The sale of these objects (at around $285 each) has allowed Roosegaarde to fund the concept without relying on big business branding. With each purchase, customers buy the world 35,000 cubic feet of clean air. Crowdsourcing launched and now sustains the Smog Free Project, and Roosegaarde hopes it will also help to create a movement in support of cleaner air. The Smog Free Tower will travel around the world.

Roosegaarde is an “infiltrator,” he says, “a hippie with a business plan.” 7  His goal is to bring the potential of the future to the present. As Smithson once wrote, “What the artist seeks is coherence and order—not ‘truth,’ correct statements, or proofs. He seeks the fiction that reality will sooner or later imitate.” 8

Roosegaarde’s “Smog Free Project” encourages us to ask: How do we become aware of the dirt we are inhaling every day? How can we clean the air and make it breathable? What is to be learned from nature? Can we turn dross into gold, coal into diamonds, soot into something elegant and crystalline? The questions are both literal and metaphoric, and they demand our engagement. Quoting Marshall McLuhan, Roosegaarde reminds us, “There are no passengers on the Spaceship Earth. We are all crew.” 9

For change to occur, humans need to desire what does not yet exist. There could scarcely be a better strategy to achieve this than enabling us to breathe clean air—something simple and primal that reminds us everyday what has been lost, what might be done to reclaim it, and how the imaginative use of technology in concert with the making of art could be central to such a transformation.

CAROL BECKER is a professor and dean of faculty at the Columbia University School of the Arts, New York.