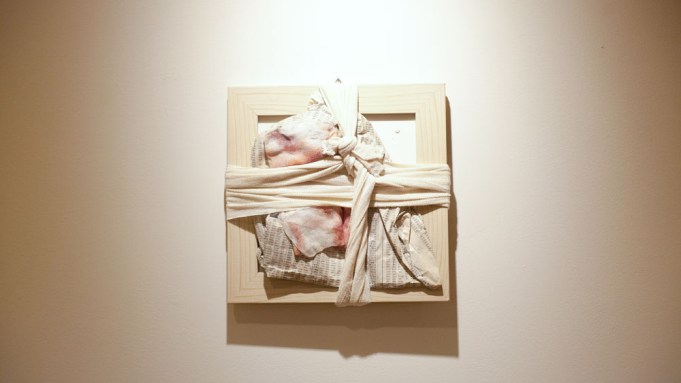 The Korean artist Eunah Kim, who lived in the U.S. for nine years (2001–10), died of lung cancer in fall 2010 in Seoul, at the age of 37. For those who knew the mischievous, soft-spoken young woman, a lifelong nonsmoker, the finality—and absurdity—of that loss cannot be mitigated, even by her remarkable art.

A welcome chance to reflect on Kim’s wry creativity is provided by “The Journey Beyond,” a show of her works on paper currently appearing [through Sept. 3] at Illuminated Metropolis Gallery in Chelsea. Recommended in A.i.A.‘s The Lookout, the densely hung exhibition consists of paintings, prints, drawings and collages in an astonishingly wide range of styles. Often rendered with deliberate crudeness, the images derive from fairy tales, religious stories, dreams and direct observation. Most are on cheap paper or discarded cardboard. Subjects include animals, a multi-armed Snow White, crucifixions (sometimes featuring a female figure), Noah’s ark, body parts and purely abstract forms.

Kim’s sculptural works were presented earlier this summer at two Manhattan venues. Following a memorial service on June 21, which would have been the artist’s 38th birthday, Gallery Da displayed 27 pieces, including small bronzes that resemble milagros, plastic coolers labeled with medical illustrations from the series “Preserved Organs for Use in the Next Life,” medallions celebrating individual body parts, a trussed and bandaged picture frame, tall felt boots with spike heels and jingle bells, and a hooded, haunting Shaman’s Costume.

A group show at Freight + Volume contained Kim’s colorful flags, one emblazoned “Happy Lungs,” along with a cast polished-bronze pelvic bone and the eloquent Casket, a large bone nestled in a plaster container that looks like a half-open gift box.

The Outsider-like intensity of Kim’s work, especially the drawings, belies her cosmopolitan background. Born into a Catholic family in Korea, she received a BA in philosophy from DukSung Women’s University in 1997. She then spent two years (1998–2000) as a novitiate nun at the Hwa Gye Sa Buddhist Temple in Seoul. In 2001, following a year of international wanderings, Kim moved to the U.S., where she earned a BFA in painting from the Rhode Island School of Design in 2004 and took graduate courses in art therapy at New York’s School of Visual Arts in 2007, about the time she was diagnosed. She exhibited in the U.S. and Europe and, in her final years, received a number of fellowships and grants.

But no summary of credentials can convey the at once spritely, mysterious, stubborn and utterly endearing nature of this artist, who told the Portland Phoenix in 2009: “I don’t want to make the situation so serious. I want people to come to the show to experience some kind of fun and delight. . . . I don’t want the work to be overshadowed by my situation.”

The Eunah I knew, too briefly, was of course more complex than this brave performance might suggest. Unfailingly warm and humorous, she could also, friends knew, appear and disappear on a whim—often traveling abroad or going into spiritual retreat. The frustration and fear she disguised in public might, in private, take the form of compulsively pounding stuffed animals. The bright, seemingly joyous scarlet of a sheath dress that the ex-novitiate once wore to a party in Jackson Heights soon turned into a motif in her art—slashes of red, sometimes in the form of adhesive tape, that paradoxically evoke both persistent vitality and coughed-up blood.

Two years later, when I saw her for the last time in a hospital in Seoul, she was starkly emaciated yet, somehow, still lovely and socially gracious. Smiling wanly and conversing like a hostess, Eunah spoke with gentle affection of the birds that twittered outside her window each morning. As I left, she said repeatedly that she was looking forward to a visit from her dearest friend.

That visitor, Hyewon Yi, director of the art gallery at SUNY Old Westbury, first befriended Eunah when they were undergraduates together in Seoul, and later opened her New York home to the ailing artist and arranged for her treatment in the U.S. As a final tribute, Yi organized Eunah’s memorial service and the three summer 2011 showings of her work.

Hopefully, “The Journey Beyond” will not be the last exhibition for this idiosyncratic talent, so worthy of greater critical notice and so beloved by her friends.

Egypt’s Great Pyramids and Sphinx Could Be Lost Due to Climate Change, Experts Say

Review: This Dalstrong Knife Sharpened Our Kitchen Skills Right Out of the Box