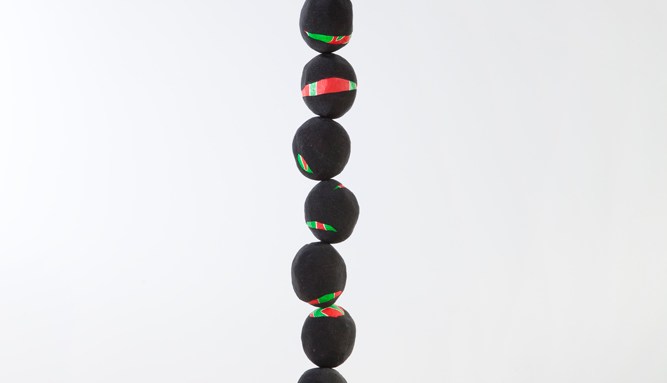 “Black is very easy. Black makes things look cool. Peach does not,” the Irish sculptor Eva Rothschild told A.i.A. at her current exhibition at 303 Gallery in New York. Over the past decade, Rothschild has been known for her elegant arachnidlike sculptures; Cold Corners, her 2009 commission for London’s Tate Britain, was nothing if not cool. A punk provocation to the Tate’s serious and traditional atmosphere, it featured shiny black aluminum rods slicing through the museum’s halls like jagged bolts of lightning.

“Taste can become a real enemy to artists,” Rothschild said of her new show, “The Heart of the Thousand Petalled Lotus.” This new body of work finds the artist swapping that sophisticated and assertive esthetic for frankly offbeat and unlovely forms in service of uncovering-and exalting-the otherworldly. Her sculptural pieces combine amorphous organic orbs and Brancusian totem poles with wavering, linear forms seemingly culled from a rain-soaked geometry textbook.

“I use green and red all the time. They’re kind of my black and white,” says Rothschild. To overcome the two colors’ association with Christmas, they are always combined with black. Us Women (New York), 2011, is a teetering, linear stack of red and green painted orbs peeping out through strands of small black plastic beads that wrap around them, described by the artist as a stack of heads. She expands on this idea by offering alternate readings of the work. “I’ve always had this slight love-hate relationship with the body. The work is not figurative, but obviously the body becomes present,” explains Rothschild.

The title, Us Women (New York), suggests a group of people. “The piece is an arrangement of objects, and it has this gravity-defining materiality which in itself brings a kind of joy,” she says. “I’m always interested in that magical relationship to material, where you don’t understand the material and why it’s doing what it’s doing. There’s a simple kind of visual confusion and pleasure in that.”

Caspar-placed atop of another work, Temptation Island, created by painting a Persian rug black-is imbued with an understated anthropomorphism. A small, greenish white, sacklike sculpture composed of cast Jesmonite, it is redolent of its cartoon namesake. “If you lift it up, it’s the weight of a baby. It puts you in the position of cradling,” says Rothschild. “And it has a friendly sort of quality to it.”

And what color does one paint a sculpture suggestive of a child and a cartoon ghost? “The color was based on an approximation of phosphorous paint,” Rothchild explained. “It suggests something glowing, rather than color coming from pigmentation. It’s an esoteric idea of color.” While Rothschild professes no interest in formal color theory, her choices expose an interest in the historicity of color; she often uses neons and other hues that suggest the digital and industrial evolution of color, as well as interior design. Citing a recent inspiration, Rothschild explains, “We had this room which I thought was white, and then when we repainted it white we realized it was actually a greenish white, like a color a decorator might choose.”

As a whole, Rothschild’s works seem to allude to one another with barely perceptual head nods. Temptation Island is mirrored by a large rectangular candy-striped black frame, Why don’t you (Frame), which leans against a nearby gallery wall. Rothschild created both pieces as frames meant to “hold” other works within them, though each also succeeds as an independent sculpture. “I think there’s too much emphasis on similarity,” says Rothschild. “I like the idea that the works are different from each other: I think it’s almost a kind of confusion in the making.”