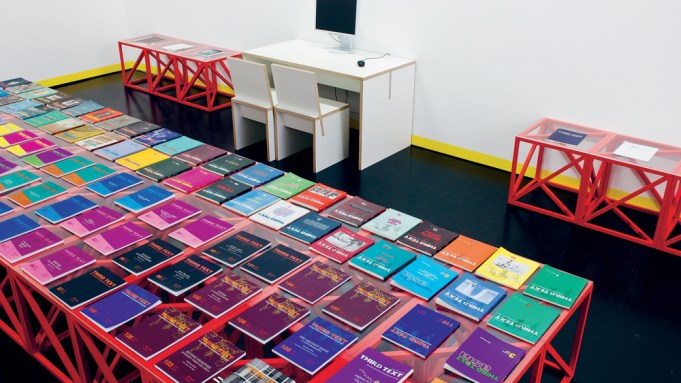 At nearly 500 pages, The Global Contemporary and the Rise of New Art Worlds is heftier than the average laptop computer—and more difficult to “operate.” Its editors—Hans Belting, Andrea Buddensieg and Peter Weibel—have dubbed it a companion guide rather than a catalogue for the exhibition “The Global Contemporary: Art Worlds After 1989,” which they organized for the ZKM | Museum of Contemporary Art, Karlsruhe, Germany, in 2011-12. To describe the book as a hybrid is an understatement. In addition to functioning as the exhibition’s official record, it is a curatorial studies primer and philosophical tract, an ambitious but exhausting approach to understanding the postmodern era.

Published more than a year after the show closed, The Global Contemporary comprises three distinct parts: an anthology of essays sandwiched between two sections of exhibition documentation. Its opening section, called the “Room of Histories,” offers specifics about the 21st-century “art industry,” while the closing section (which feels like an afterthought) documents the work shown by the exhibition’s more than 100 individual artists and teams. Like a sandwich, however, this volume’s identity derives from its interior: its anthology of 26 texts (including introductions and three interviews) that seek to explicate our brave new, post-Cold War art world(s).

The principle animating the tripartite Global Contemporary project (comprising the exhibition, the book, and ZKM’s long-running Global Art and the Museum seminar project) is a belief in the almost unalloyed benefits of our current and increasingly “post-multicultural” understanding of global art. This new near-parity of Western and non-Western art—what Weibel has long referred to as the “included” and the “excluded”—is symbolized by, and partly the result of, the viral proliferation of biennial exhibitions across the planet.

Some readers will already know far more about celebrated artists like Christian Jankowski and Rafael Lozano-Hemmer than is provided in the final page-per-artist section, but they may discover the tantalizing work of lesser-known artists such as Bani Abidi, Doug Fishbone and Surasi Kusolwong. In many cases, however, these artists work in video, film or other mediums inimical to reproduction on the printed page.

“Room of Histories” contains such data as statistical representations of China’s emergence as a gigantic art market and mappings of the spread of far-flung biennial exhibitions. An informal typology of “art spaces” includes museums operated by private collectors, universities and governments, although it goes unremarked that the mission statements of nearly every one of these spaces employs the quasi-commercial term “promote.” The most compelling of the institutions are the dazzlingly photographed, pharaonically scaled projects in the Gulf states. Nearly simultaneous with the book’s publication, however, was a well-publicized (and inevitable) censoring of Western art in the emirates—the Qatar Olympic & Sports Museum’s refusal to exhibit three ancient classical statues of nude athletes, part of an Olympic heritage exhibition on view in Doha in spring 2013.

Despite the project’s focus on the 21st-century art world, the age of digital media is unaccounted for in the book’s essays. Print, however, is well represented, in the gossipy annotated summaries of the Art Newspaper, spanning 2009-11; a cover image of the July 1989 number of Art in America, titled “The Global Issue”; and an homage to Rasheed Araeen’s Third Text, the journal of “Third World” perspectives (his descriptor, no longer used) founded in 1987 by the London-based, Pakistan-born artist and former Black Panther.

Comprehensively presented as a sculptor, publisher and biography subject, Araeen lived up to his role as the project’s leftist éminence gris. Co-essayists Liu Ding and Carol Yinghua Lu report that he once jumped to his feet to interrupt an exhibition-related discussion, accusing Belting of a much-disavowed but persistent “Eurocentric sense of superiority.”

Oddly, The Global Contemporary all but omits the most critical development of the 21st-century art world—the proliferation and primacy of art fairs, which have arguably overwhelmed biennial exhibitions. (The book devotes perhaps 100 words of neutral description to this phenomenon, which originated in Cologne nearly a half century ago.) Participation has become mandatory for major-league galleries, forcing out less well-financed rivals, ensuring consolidation within the art industry and making fairs the place where dealers close an ever-larger percentage of their private sales.

The book’s diminution of the effect of money—although mediagenic auctions do get extensive coverage—is also telegraphed in an emphasis on the “global turn.” The term is a simultaneous acknowledgement of the paradigm shift documented in The Linguistic Turn (1967), edited by American philosopher Richard Rorty, and a means of sidestepping the echoes of modernism and multinational capitalism in the word “globalism.” The authors usually invoke the concept as subtext in relation to curatorial—rather than artistic or local social—practices. The effects of economic pressure on artists to be international players, for instance, gets scant attention from the essayists, even though the show included a section called Art as Commodity: The New Economy and the Art Markets, with work by 17 individual artists and groups addressing money issues. That the concerns of artists are largely unarticulated is a reminder that only curators—and a few collectors and art magazine editors—can contemplate attending even a tiny fraction of the roughly 130 biennials that now encircle the planet.

The best way to “stay up to date [with] new cultural subjects, energies, and information”—which Gerardo Mosquera describes in his essay as the challenge of today’s curator—is to attend, and occasionally organize, “notable exhibitions.” The two surveys most frequently cited were both staged in 1989—the Centre Pompidou’s “Magiciens de la Terre” and the Third Havana Biennial. These huge showcases of global diversity assaulted traditional Western ideas about art’s character and appearance. According to an unsigned section introduction, “curators . . . paved the way for an era in which art is no longer practiced in terms of the Western mainstream model alone.” Put another way, curators possess agency (not to mention self-regard), while artists do not.

Of course, this curatorial acumen demands a sort of planetary “legibility” or homogenization typified by the installation format and resulting in decidedly mixed outcomes. On the one hand, it increases the pool of exhibited artists, which has the salutary effect of deemphasizing the role of celebrity artists and the importance of the market. On the other, it replaces them with a small group of globe-hopping celebrity curators who increasingly determine what the rest of us see.

Essays in The Global Contemporary were written for the most part by established European academics and curators (e.g., Jean-Hubert Martin, Piotr Piotrowski) and their ZKM colleagues, as well as a few non-European practitioners such as Raqs Media Collective or the Indonesian curator and critic Jim Supangkat. The strongest texts are those focused on strategies to produce the “rewritings” of history that Weibel champions. Oscar Ho Hing Kay, a curator in Hong Kong, reflects on the former colonial outpost’s tame art scene vis-à-vis the brasher output of the mainland, along with Western museums’ practice of categorizing today’s Chinese calligraphic art as a traditional, rather than contemporary, art form. Other essays seem overfamiliar: two about cultural cannibalism, for example, reintroduce a subject frequently discussed since the 1999 São Paulo Bienal took anthropophagy as its theme.

No text resonates more fully, however, than the conversation between Édouard Glissant (1928-2011), a Martinique-born cultural theorist and writer, and Manthia Diawara, a Malian documentarian and scholar who has long resided in the U.S.  Their 2009 interview aboard the Queen Mary 2—Glissant’s heart condition precluded a trans-Atlantic flight—attests to the recently deceased writer’s subtlety of mind. Setting the shipboard scene as less a “sign of comfort and ease [than] . . . its opposite . . . the time you cannot let slip or run away from,” Glissant turns to the very different ocean crossing made by his enslaved African forebears. He rejects a unitary Creole identity in favor of the fluid, complex process of creolization: “In creolization you can change, you can be with the Other. . . . You can change with the Other while being yourself,” he observes. “You are not lost because you are multiple.” For Glissant, the very notion of identity was associated with individuals more than groups, with what makes each of us uniquely, constantly ourselves.

ROBERT ATKINS is the author of ArtSpeak: A Guide to Contemporary Ideas, Movements and Buzzwords (Abbeville, 25th anniversary edition, 2013).