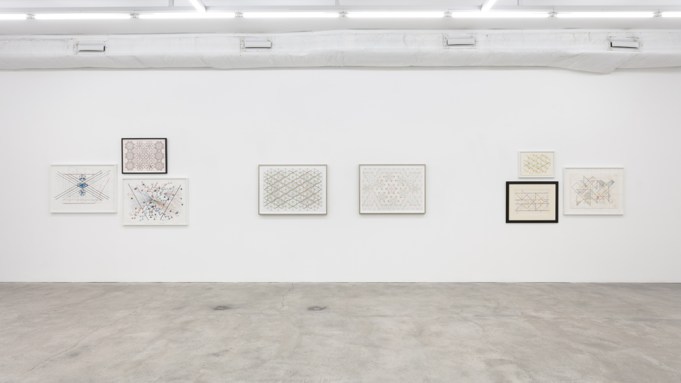 In the West, geometric art is often associated with an aesthetic of reduction and simplicity. Movements like Minimalism, Constructivism and Neo-Concretism (exemplified in the Met Breuer’s current exhibition of the work of Brazilian artist Lygia Pape) look back to the notion of essential Platonic forms underlying the chaos of visual experience. The works in the opening show at the new Institute of Arab and Islamic Art (IAIA), generically titled “Exhibition 1,” and in most cases borrowed from the artists or their galleries, owe a debt to the very different approach to geometry in the Islamic world. The four women artists represented in the show hail from different Muslim majority countries and represent different generations. Each has spent significant time in the West and studied Western as well as Islamic art. Their work combines an awareness of traditions of Western abstraction with the complex geometry derived from the intricate patterning and mathematical underpinnings of Islamic architecture and design.

Three of the four have been the subject of recent monographic museum shows. The fourth is younger and just beginning to make an appearance on the international stage. Monir Shahroudy Farmanfarmaian is probably the best known of the group. A 2015 exhibition at the Guggenheim was the first US museum show for the 93-year-old Iranian artist, but hardly her first exposure in New York. Farmanfarmaian came to the city in 1944 to study art and plunged into the scene, rubbing shoulders with Warhol, Pollock, de Kooning, and others while working as a freelance fashion illustrator. In 1957 she returned to Iran, and began to explore geometry in line drawings and complex faceted mirror sculptures and reliefs.  Following the 1979 Iranian revolution, during which many of her works were confiscated, she was stranded in New York, and remained there until 2004, when she moved back to Iran. The work at IAIA includes several drawings from the mid-1970s characterized by straight lines that traverse the paper, changing colors and shifting course in abruptly angled turns. The more recent works, all created within the last five years, are much more complex, incorporating glitter, shards of mirror that create fractured reflections, explosions of radiating lines, and, in some, present intricate interlocking patterns that seem derived from traditional Islamic decoration. The austerity of the early works gives way to an explosion of energy and freedom, suggesting that this nonagenarian artist is currently operating at the height of her powers.

Indian artist Zarina Hashmi, who goes by her first name, is thirteen years younger than Farmanfarmaian and is also the product of transnational influences and political upheavals. After experiencing the violent partition of India and Pakistan in 1947 as a child, she became a nomad, living in Paris and Germany before settling in New York in the mid-1970s. She has also been enjoying late life recognition. After representing India at the 2011 Venice Biennale, she was the subject of a traveling exhibition organized by the Hammer Museum in 2012. She has cited Eva Hesse as an influence, and one can detect a kinship between the two in her irregular grids. At the same time, childhood memories, the experience of Partition, and her subsequent displacement have also marked her work. One sees this in her contribution to the IAIA show. The thirty-six identically sized woodcuts in her series “Home Is a Foreign Place” (1999) each reflect an abstracted memory of her childhood home. Some references are obvious—a diagram of the house’s layout, rectangular forms suggesting windows or doors—while the crosses and bisected rectangles in others seem to belong to the minimalist lexicon. There are also a number of variations on the intersection of a circle and a square that seem derived from Islamic patterns. Each is inscribed with the graceful calligraphy of an Urdu word that adds content to the image. (For instance, an image of horizontal lines is inscribed “rain.”) Together, they suggest a personalized geometry that combines memory, culture, and formal restraint.

Nasreen Mohamedi‘s work was featured as one of the opening exhibitions at the Met Breuer in 2016. Born the same year as Zarina, Mohamedi also experienced the upheaval of Partition, but her life was shadowed by a larger personal misfortune. Afflicted with Huntington’s disease, a degenerative neuromuscular disorder, she struggled in her later years with failing motor skills before dying at age fifty-three in 1990. Like Zarina and Farmanfarmaian, she led a cosmopolitan life, studying and working in Paris and London before returning to live in Mumbai while traveling throughout the Near East. Despite her physical difficulties, she produced meticulously crafted work. Her drawings present intersecting parallel lines and carefully delineated planes that seem to float on the white page. They play with the principles of perspective and illusion and suggest Constructivist antecedents. Here some of these drawings are paired with her highly abstracted photographs, which suggest the sources of the drawings and offer glimpses into Mohamedi’s vision of the world. The black-and-white photographs trace shapes created by shadows, bits of tape, or painted lines. Often their sources are mysterious, as in an untitled photograph from the 1970s that appears to present white boards placed over a wet street. These float over the reflective surface below like disconnected bars of light converging towards a distant vanishing point. Such works provide an intriguing counterpoint to the drawings.

The final artist here is Dana Awartani, who, at age thirty, represents a generation in which the kind of transcultural lives and influences that characterize the other artists are no longer an anomaly. Born in Saudi Arabia, Awartani studied in London, first focusing on contemporary Western art at Central Saint Martins, and then enrolling in London’s Prince’s School, which is devoted to the preservation of traditional non-Western art. More overtly than the other artists here, she has taken Islam’s sacred geometry as her subject. For this exhibition she presents a set of twenty-eight gouache and ink drawings titled “Abjad Hawad”—a reference to the system by which the twenty-eight letters of the Arabic language are assigned numerical value. Awartani has translated this concept into a dazzling grid of images that grow in complexity as one reads from top left to bottom. Intricate patterns are enclosed within a lexicon of geometric shapes, beginning with the single-sided circle and ending with a nonagon. These are presented singly in the top row and doubled and then tripled below; the series ends with the twenty-eighth figure that quadruples the initial circle. These rigorously structured, spectacularly colorful images allude to the arithmetical basis of Islamic ornament.

The IAIA is the brainchild of Mohammed Rashid Al-Thani, a member of the Qatari royal family who lives in New York. It opens its doors at a fraught moment in relations between the Islamic world and the United States, and its avowed mission is to use art to counter the misconceptions surrounding Arab and Muslim culture. In their willingness to engage diverse aesthetic and cultural traditions, the artists in this opening show embody the rewards of cultural exchange. “Exhibition 1” suggests that the IAIA will be a welcome addition to the New York art scene.