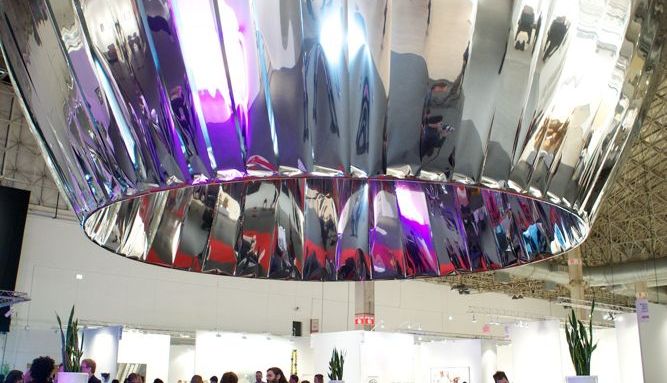 The new and highly anticipated EXPO Chicago just finished its four-day run (Sept. 20–23) with the promise to re-establish Chicago as a top player in the crowded art fair schedule, after the decline and eventual demise of Art Chicago held each spring at the Merchandise Mart. Approximately 100 galleries, many of which had not participated in the Chicago fair for quite some time, returned to Navy Pier, site of the original Chicago International Art Exposition, established in 1980, whose golden years organizer Tony Karman seeks to revive.

A handsome, spacious design by Studio Gang Architects lent an air of sophistication with wide aisles, an easy grid layout and reflective conical forms dramatically suspended from the ceiling. “The fair has all the right ingredients,” said Michael Solway, director of Cincinnati’s Carl Solway Gallery, “a great location and good dealers,” a sentiment echoed by many. The Solway Gallery, celebrating its 50th year, showcased, among other works, text-based Plexigrams by John Cage, small-scale video pieces by Nam June Paik and ceramic sculptures by Hannah Wilke.

Overall quality was high, with a focus on well-known figures of modern and contemporary art, although earlier claims intimated that EXPO Chicago would also spotlight design. Emerging work was found in the fair’s EXPOSURE, an international showcase of 17 younger galleries who gave the fair a bit of an edge, as did special projects such as one by Chicago podcast and blog Bad at Sports. The installation included live interviews, cocktails and instant 3-D renderings of visitors. In/Situ, a project by independent curator Michael Ned Holte, sited large-scale installations throughout Festival Hall. It also included a video program, the highlight of which was Jan Tichy’s Things to Come 1936–2012 (2012), a collage of projections that animates lost filmic work by Laszlo Moholy-Nagy, organized in conjunction with Richard Gray Gallery.

New York galleries were strong, both in number and in ambition. Luc Tuymans’s painting Fortis (2010), featuring a simple blood-red curve centered within a minimal white field, recasts Fortis Bank’s corporate logo, offering an ironic tone at David Zwirner, who also brought works by David Hammons, Fred Sandback, Gordon Matta-Clark and Alice Neel. Also of note were works by Richard Tuttle, Robert Mangold and Maya Lin at Pace, and at Sean Kelly, photographs by Alec Soth and Los Carpinteros, as well as sculptures by Joseph Kosuth and Antony Gormley. At Luhring Augustine, a “still life” by Rachel Whiteread, comprised of small, stacked elemental forms made from metal, wood, plaster and resin all in yellow hues, sat in quiet contrast to her floor-based Untitled (Black Bed), 1991, a polyurethane cast of an old mattress.

While pleased with the overall look of the fair and the excellence of the works on view, some dealers expressed disappointment in sales, which were generally described as “slow.” Kristen Becker, a director at Luhring Augustine, admitted the gallery was “used to a different pacing.” “We already work with a lot of Chicago collectors,” Becker told A.i.A. “Thus we were hoping to expand our clientele.” Others took a wait-and-see attitude, including one spokesperson for David Zwirner, who asked not to be identified. “In terms of collectors, we will have to see what happens,” she said. “If galleries are selling, I’m wondering what is the price point? What are the numbers?” As of this writing, sales figures from EXPO Chicago were not available.

Chicago dealers such as Rhona Hoffman, Carl Hammer, Corbett vs. Dempsey and Kavi Gupta all reported that sales were good. Kavi Gupta sold works by Theaster Gates, photographs by Melanie Schiff, as well as several paintings by Angel Otero and Antonia Gurkovska. “The fair has been very good for us,” noted assistant director Emanuel Aguilar. “I hope the experience has been shared across the floor.”

The international presence was exclusively European with the exception of Chambers Fine Arts, a dealer in contemporary Chinese art with galleries in New York and Beijing. Swiss dealer Galerie Gmurzynska brought an impressive selection of classic modern painting and sculpture selected with a special focus on artists with historic connections to Chicago and Chicago institutions, such as Wifredo Lam, Kurt Schwitters and Fernand Leger. The gallery sold two David Smith painteings, but gallery director Mathias Rastorfer also noted that sales were not as expected. “Expectations of the fair were higher given that there is a history here,” he said. “But the dilemma of this fair is that it is new and will have to find its own identity. It can’t compete with Frieze or Basel, and shouldn’t. It has a sophisticated mix of modern and contemporary, so I think we should give it another year.”