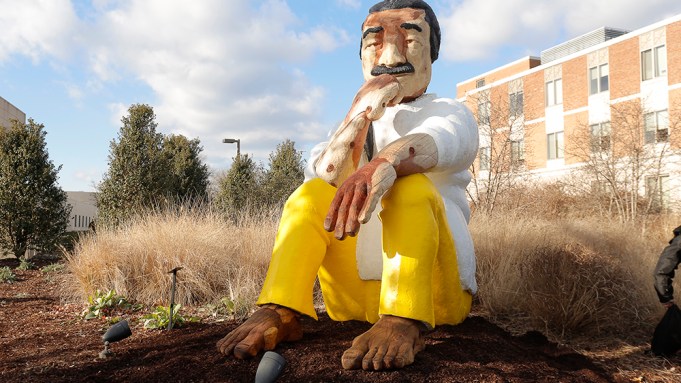 In the sleepy first week of 2017, before many Americans had even returned to work after the holidays, a statue of American Indian Movement (AIM) cause célèbre Leonard Peltier was removed from display outside American University’s Katzen Arts Center in Washington, D.C., ostensibly because of anonymous threats of violence. The incident marks the first time in recent memory that a private institution has been intimidated into removing art from its property. The circumstances that led to the statue’s removal foreshadow tactics that will likely be used to stifle dissent in the Trump era.

Peltier was convicted of killing of two FBI agents in a shootout on the Pine Ridge Reservation in 1976. But the evidence against him is sketchy, and he has been recognized as a political prisoner by Amnesty International. Artist Rigo 23 made the statue to help raise awareness about a last-minute push by Peltier’s supporters worldwide to encourage President Barack Obama to grant Peltier clemency. In fact, on the day that the statue was taken down, James Reynolds, the lead prosecutor in one of Peltier’s appeals, wrote a letter to Obama in support of his release, writing: “It’s time to call it quits.”

Complaints from an organization representing active and retired FBI agents, in conjunction with anonymous threats of violence, led to an abrupt decision by American University to remove the statue three months before its scheduled deinstallation. With an incoming Republican administration, it might be tempting to write off the removal of the statue as merely a predictable return to the contentious Culture Wars of the Reagan and Bush administrations. This would be incorrect. The Moral Majority didn’t threaten to blow up the museums where the work they opposed was shown. They used the legal avenues of expression available in a democratic society to persuade federal lawmakers that the art they didn’t like shouldn’t be funded with taxpayers’ money. The removal of the Peltier statue was instigated instead by something altogether new on the American art scene yet long a defining characteristic of fascist regimes: the muscle of law enforcement operating in parallel with threats of extralegal force.

The infamous controversies around the works of Robert Mapplethorpe, Karen Finley, David Wojnarowicz, and others in the 1980s and ‘90s ultimately hinged on the question of whether the New Endowment for the Arts should allocate funds for the creation of politically provocative and sexually explicit works. But neither Rigo 23 nor the Katzen Arts Center received public grant money to make or display the Peltier statue.

The nine-foot-tall wooden statue, fashioned from California Redwood, was not only paid for with money raised privately by Rigo 23, but the artist drove the statue from his home in Los Angeles to Washington in his own flatbed truck. It was a characteristic gesture of personal commitment for the politically engaged artist, whose past works include collaborations with Zapatista craftswomen and Emory Douglas, the Black Panthers’ minister of culture. Often associated with San Francisco’s Mission School, a group of artists influenced by mural painting and other forms of street culture, Rigo is perhaps best known for The Deeper They Bury Me, The Louder My Voice Becomes (2009). The replica of the solitary confinement cell of Robert King, a member of the Angola Three group that agitated for better prison conditions while incarcerated, was originally installed at New York’s New Museum. The statue of Peltier, based on a self-portrait painted in prison, is the latest project in a collaboration with Peltier that has lasted nearly two decades, during which Rigo has organized touring exhibitions of Peltier’s paintings and even sent Peltier’s work to institutions that have then commissioned the prisoner’s work in place of his own.

The statue of Peltier was dedicated at American University December 9, just days after Obama announced that the federal government would deny building permits for the Dakota Access Pipeline across Sioux land in a victory for the indigenous protesters at Standing Rock, North Dakota. A new monument to the perhaps the best-known member of the American Indian Movement seemed like another cause for celebration in a year that had already seen the most visible, militant, and optimistic Native American activism since the AIM’s heyday in the 1970s. But threats against the statue started coming even before it was installed. Two days before the dedication, a man approached Jack Rasmussen, director of the Katzen Arts Center, identifying himself as John Trimbach, the son of Joseph Trimbach, the special agent in charge of FBI operations in Wounded Knee, South Dakota, when Peltier was arrested. The Trimbachs co-authored American Indian Mafia (2007), a vanity-press book that tells the story of the Peltier case and life on Pine Ridge Reservation from a law enforcement perspective. “[Trimbach] told me not to install the sculpture by Rigo 23,” Rasmussen wrote in an email. “When I said I would, he asked if we received any federal funding. I showed him the door.” After the statue had been installed, Rasmussen said, Trimbach emailed him again and wrote: “You really stuck your foot in it this time.”

In less than three weeks, Trimbach’s vague threats materialized into the letter of complaint to the school from the FBI Agents Association. Though the statue had been dedicated on the last day of the semester, right before students, faculty, and staff left for the holiday break, right-wing news outlets such as Campus Watch, a website that aggressively monitors faculty and student activism, reported on the FBIAA letter as if from the center of a raging campus controversy. A sensationalistic story on a local Fox affiliate was immediately followed by anonymous threats of violence to the school. In a brief statement to the press, American University president Neil Kerwin announced the statue would come down immediately. “The subject matter and placement of the piece improperly suggested that American University has assumed an advocacy position of clemency for Mr. Peltier, when no such institutional position has been taken,” the statement said. “Further, the nature and location of the piece called into question our ability to honor our responsibilities to ensure the security of the art and the safety of our community.”

Note how the statement strangely invokes a “responsibility” to protect art even as the school’s own administration is dismantling the statue. Then there is the oddly disassociated tone, which recalls a dissident’s televised recital of a false confession. The statue’s dedication came the day before the university’s law school hosted a public discussion of Peltier’s clemency petition, featuring Robert King and indigenous prison activists. But the statement disavows Peltier and his cause completely. Ultimately, the statement prompts a litany of unanswered questions. The Katzen Arts Center is literally across the street from the headquarters of the Department of Homeland Security. So how exactly did the “nature and location” of the statue make a guarantee of public safety impossible? If the school was truly threatened with violence, is this not then an example of domestic terrorism? Why didn’t the school fight back?

The above line of questioning points rather chillingly toward a second one. If a wealthy private institution like American University did not seek public support from First Amendment advocates and the larger art and academic community in the face of violent threats, one wonders if they suspected that the FBI would not actually come to their aid should something happen. And so, the removal of Rigo 23’s statue of Peltier from public view has cast into relief the new terra incognita to which we have suddenly arrived. The prospect of a law enforcement that does not enforce the laws selectively aligns neatly with an Education Secretary who wants to get rid of public schools, a Secretary of Housing and Urban Development who wants to privatize public housing, and an Environmental Protection Agency chief who intends to do no such thing under a Trump administration that did much to destroy faith in public institutions before even taking power. Will public faith in art and academic institutions follow?

Shortly before Trump’s inauguration, the International Committee for Museums and Collections of Modern Art, an organization representing nearly six hundred curators and arts administrators from eighty-five countries, issued a strong statement condemning the removal of the Peltier statue and calling for its reinstallation. Yet for the most part, there has been little support for Rigo 23 and the statue coming from the art world. Time will tell if artists and art institutions will step forward and make a stand. But artists and administrators who have adopted a “wait and see” attitude toward future repressions should understand how the removal of the Peltier statue shows that curtailments of freedom have already arrived.

Audemars Piguet Will Launch Its Own Certified Pre-Owned Program This Year, CEO Says