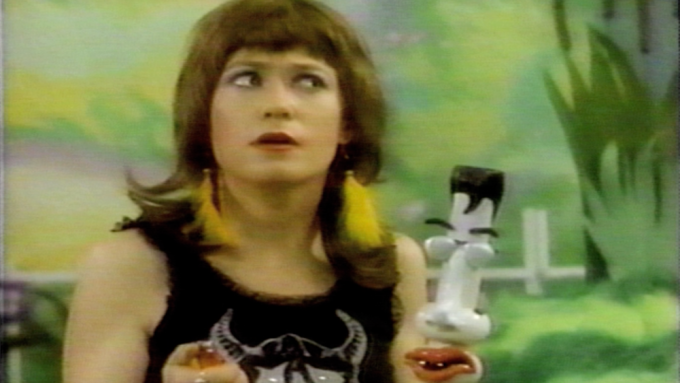 I, too, have spoken in pious tones proclaiming The Wire as the greatest work of broadcast television ever. But now celebrating my twenty-fifth year of Ann Magnuson fandom, I was well primed to change my mind in the basement of Franklin Street Works in their current exhibition, “Danger Came Smiling: Feminist Art and Popular Music” (through January 1, 2017), alone at last with her twenty-seven-minute video, Vandemonium.

Vandemonium is one of the finer works of Magnuson’s early performance career—or rather, one of the finest early works for which we have a proper record. The video was produced and distributed by HBO/Cinemax, where it aired in 1987. Magnuson was the founding manager, curator, and grand dame of Club 57, the raucous club and art space located in the basement of the Polish National Church on St. Mark’s Place in the late 1970s and early ’80s. In Vandemonium, she plays a biker chick named Sweet-Pea (as well as several other characters), who, thrown from the back of her boyfriend’s motorcycle, lands in a surreal Wizard of Oz-style obstacle course en route to her desired destination: not home, mind you, but a wet T-shirt contest at a death metal concert. Toto is replaced by a talking bong that resembles Elvis. Along the way, John Sex, Eric Bogosian, Joey Arias, and other luminaries of the downtown scene make appearances. A seeming insider’s romp through popular culture’s unconscious belies the video’s bitterly scathing cultural and political critique. As Sweet-Pea hustles onto the set of a Christian-themed aerobics show, compelled by the inscrutable laws of her odyssey to act as hostess, the bong urges her to play along, softly quipping that if “they find out who we are, they’ll have us tattooed and sent to the AIDS camps.” It is a line seamless enough to be easily missed, but serves as a shocking reminder of just how high the stakes were and have always been in the culture wars.

Curator and art historian Maria Elena Buszek did not see Vandemonium when it originally aired, but instead watched a dubbed VHS tape circulating among friends in high school. Buszek is committed to popular culture, asserting that when works of the avant-garde infiltrate mainstream genres, lives, like her own, are transformed. This thesis underlines the exhibition (which borrows its title, “Danger Came Smiling,” from a 1982 album that features not lyrics but improvised cries, noises, and scream therapy by the post-punk band Ludus), foregrounding feminism not as a productive critical framework, trending now and again among academics, but as an ongoing movement with material, political, and spiritual goals. Featuring works spanning forty years and multiple generations of like-minded artists, the through-line of the show is not just feminism, but the DIY, authority-defying ethos of punk rock, and its regular recurrence in new forms of ad-hoc cultural collaboration.

Institutional interest returns again and again to New York’s 1970s and ’80s, raking through those decades as perhaps the last great American art moment. New York was dirty, dangerous, and raw, fertile ground for the early years of punk rock, hip hop, and graffiti art. Later, the art world was thrust into crisis with life-or-death urgency, first, during the rise of the Moral Majority of Reagan’s first term, and even more so throughout the early years of the AIDS epidemic. Buszek attempts to show us not only where the action was at, but to remind us that it’s still ongoing.

In the late 1970s, performance artist and Franklin Furnace-founder Martha Wilson noted that everyone she knew had joined a band but her, so she called up friends who also couldn’t play instruments, and the all-girl conceptual art a capella group, DISBAND, was formed. Original members of DISBAND included Ilona Granet, Donna Henes, Ingrid Sischy, and Diane Torr (Barbara Ess, Daile Kaplan, and Barbara Kruger were also briefly members). Active from 1978 to 1982, they performed throughout New York City and toured internationally. The earliest works in ”Danger Came Smiling” are archival photos and rare early videos of the band, as well as documentation of the remaining members’ recent reunion shows. Now appearing more mischievous than ever, they perform mock-serious songs and rituals, venting the unrelenting angst of having never gotten rich, how to look sad, and a call-and-response improvisation proclaiming the fundamental rights of women: “every girl . . .has a right . . . to be president! / every girl . . . has a right . . . to a fuck buddy!”

Also featured in the exhibition is a recent music video by Alice Bag. Bag was the lead singer of the influential LA punk band The Bags. An unashamedly sexy, Chicana lead singer, she was all but a unicorn in the heavily white, heavily male, often sexist punk scene. Forty years later she has now released her first solo album. The song “He’s So Sorry” has the singer conjuring both Phil Specter’s Wall of Sound as well as the producer’s notorious spousal abuse in a cautionary tale of domestic violence. In her memoir and elsewhere, Bag credits punk rock with launching her out of an abusive family home and into a career in education, activism, art, and music.

Shizu Saldamando, a Japanese-Mexican artist raised in San Francisco and now based in Los Angeles, pays homage to Bag and hardcore singer Martin Sorrondeguy in her 2015 silkscreen Alice Bag and Martin Crudo, a collaborative work with the Maricón Collective, an artist and activist group that promotes queer Chicano/Chicana community-building through parties and performances. Saldamando is known for her hyper-realist portraits (one of which is included in the show) of close friends from the subcultures she grew up in, marginalized individuals who, like Bag, are too often erased from the scenes they helped to create.

The exhibition is not simply an homage to a bygone era. The show also features recent work from Damali Abrams, Wynne Greenwood, Eleanor King, and Xaviera Simmons. Simmons’s self-portrait photography in landscape settings shrugs off the conventions of both traditions. In each photo, the artists holds an album cover from an African American singer like Nina Simone or Millie Jackson before her face, suggesting how subjective relationships to space can be reshaped by whatever might be playing in our earbuds at the time.

Visual artist and musician Eleanor King also works directly with vinyl and record covers. Her 2016 piece Redacted Records (come up from the back) is as droll as any Felix Gonzales-Torres riff on Minimalism’s masculinity complex. Vintage album covers of female artists line shelves like any record store display, but all text has been erased by King’s patiently applied acrylic paint. With the descriptors suppressed, one can see the pained lengths by which all of these singers, from Carol Burnett to Judy Garland, are feminized, sexualized, or otherwise stripped of their identity by the protocols of cover art and record sales.

In focusing on feminism and music, Buszek acknowledges the deep structural inequalities that can sideline artists not only from mainstream exposure but from knowing their own history. That the links in the show are sometimes tenuous, suggesting that these artists are working in harmony but often unknown to each other, is part of the problem and the challenge. The unconscious reach of unsung genres and unrecognized forebears is evident in Damali Abrams’s work. The language and style of her zines, produced in 2014/16, are in sync with the Riot Grrrl zeitgeist of the early ’90s. Abrams drew inspiration from her teenage diaries from that era, though she knew nothing of the Riot Grrrls at the time.

Buszek’s thesis is simple, right, and necessary: transformation is possible when boundaries are transgressed, and her exhibition unfolds like a mixtape. Affectionate juxtapositions suggest the attachment of a devoted fan girl. Like any good mix, Buszek brings to light the affective affinities between each work, and each is made better by its coexistence with the next. In essence, Buszek proposes that these artists should know each other. And that you should know them, too.

From Iceland to Norway: Meet All the Michelin-Starred Nordic Restaurants of 2022