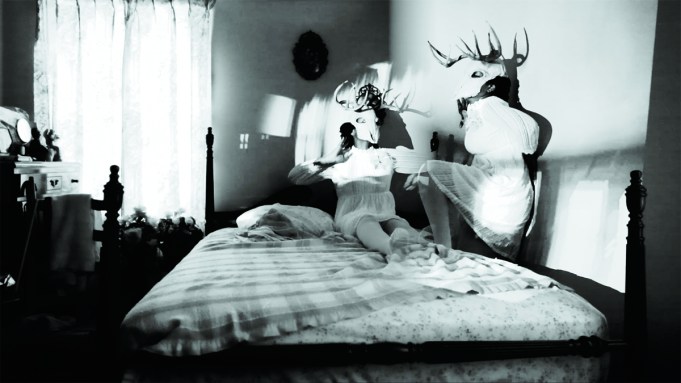 Since the Great Migration, the narrative of black experience in America has skewed toward urban life, to the point where the word “urban” now functions as racist shorthand for “black.” New York–based artist Allison Janae Hamilton uses this association as a conceptual backdrop to her films, photographs, and installations, which explore the historical connections between African American life and nature.

Born in Kentucky, Hamilton grew up in rural Florida and spent much of her childhood at her family’s farm in Tennessee. In 2017 she received her MFA from Columbia University. At her thesis exhibition, Hamilton debuted her video Floridaland (2017), which depicts several women—including the artist, her mother, and godmother—treading misty forest paths while wearing animal masks. On the soundtrack, voices sing a wordless melody in unison. Footage of a church service and of the artist, in a bird-skull mask, riding a white horse along a coastline is interwoven with panning shots of the gray-green Southern winter landscape. The three-channel video was displayed within an installation that included three taxidermy alligators purchased from hunters in Florida. One of the reptilian bodies hung from the ceiling with strands of beads wrapped around its head; the others were posed as ouroboros, the ancient symbol of a snake swallowing its tail that signifies the cyclical nature of time. Animal imagery is a recurring theme in Hamilton’s work. Hides and masks allude to hunting and storytelling—two activities central to her family history.

“Pitch,” which opens this month at MASS MoCA, is Hamilton’s first solo museum exhibition. The show’s title refers to both the frequency of sound and the resin from which turpentine is derived—the source of the idiom “pitch black.” The exhibition brings together past and recent work, including a new version of Floridaland that incorporates fragments from  A balm for the living (2018), an evocative video shot at Hamilton’s family farm. In it, Hamilton appears in a bedroom wearing a white lace dress and various animal skull masks. Projections of the surrounding environment flicker against her body and the walls as she moves around the space, restlessly at some moments and tranquilly at others. The soundtrack is a cacophony of tinny percussion and high-pitched bird and insect noises. The sunlit farmstead grounds and quiet interior feel idyllic and timeless, yet a pervasive sense of anxiety recalls the specter of slavery that continues to haunt the architecture and landscapes of the American South.