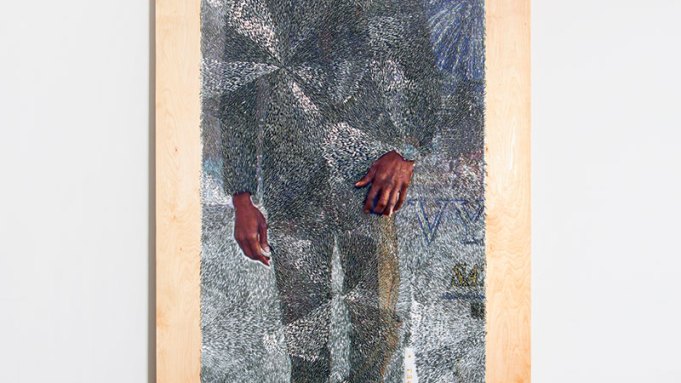 Wilmer Wilson IV collects and studies trash he finds in the street. His performances, which he refers to as “ephemeral sculptures,” feature assemblages of massive quantities of these mass-produced castoffs, which include paper bags, Band-Aids, and lotto tickets. Henry ‘Box’ Brown: FOREVER (2012) was an homage to a nineteenth-century Virginia slave who cleverly gained his freedom by shipping himself north in a crate. For the work, Wilson, who is African American, covered every inch of his own skin with hundreds of postage stamps and walked through the streets of Washington, D.C.

Wilson lives in Philadelphia, where he received an MFA from the University of Pennsylvania in 2015. For a series of works now on view in “Songs for Sabotage,” the New Museum’s fourth triennial, Wilson has zoomed in on the tattered flyers for parties, concerts, strip clubs, and church plays that he sees stapled to telephone poles around his West Philadelphia neighborhood. He enlarged the figures in seven of these images to life size and mounted each on an eight-by-four-foot sheet of construction plywood. No adhesive was used. Instead Wilson affixed the prints with an estimated 200,000 staples. In the gallery, light ripples and shimmers across the works’ surfaces, as if across water; the dense topography of staples obscures the images, but also makes them enchanting.

At first glance it seems Wilson has covered the surface entirely, but upon closer inspection, one finds he has left an isolated body part in each image unstapled, its black skin standing out against the glittering surface. In our interview, Wilson said he intends the gesture of near-complete concealment to “lessen the demand of visibility” on the African American subjects, who, through their use in advertising flyers, “are subjected to a base level of commodification.”

The work hinges on this dance of hiding and revealing. The thousands of tiny points piercing the images suggest the threats of hypervisibility that black bodies face in the streets through police surveillance and discrimination. And yet the staples also seem to offer a tender protection from this exposure, both to the young black bodies in the images and to the community life evoked by the flyers.

McDonald’s Adult Happy Meals (With Toys) Are A Thing — For a Limited Time, That Is