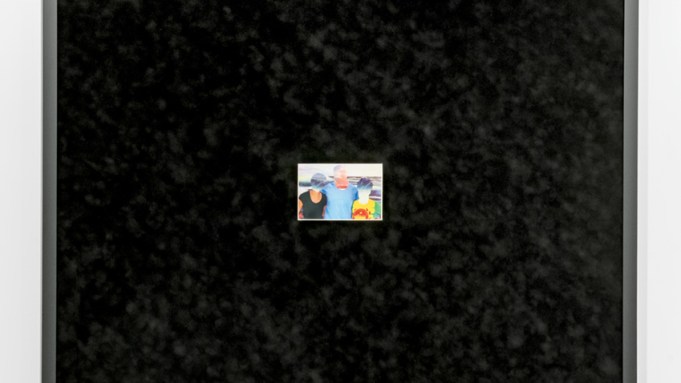 “I touch deep inside every woman I fuck” reads the central line of Sable Elyse Smith’s neon wall sculpture Landscape III (2017). In a move from individual to collective that recurs throughout her work, Smith insists on the depth of a single touch even while grouping lovers together. Written in white letters, fully justified, and underscored by a bright blue line, the text starts by comparing the artist’s own fist to another’s: “Like the hands of the correctional officer on my abdomen searching for metal—rather—groping for the sake of taking over—for possession.” By drawing an analogy between two very different scenes of touching, she implies that erotic intimacy is not safe from the body’s memories of other kinds of contact. Though Smith frequently addresses the specificity of her own experience, she does not prioritize the personal over the social. Instead, she moves dialectically between the two, and between the tight perspective of portraiture and the bigger picture she calls “landscape.”

Landscape III is part of an ongoing project about mass incarceration that draws on Smith’s experiences visiting her father in prisons over the course of two decades—nearly two-thirds of her life. An interdisciplinary artist and writer, Smith resists the more typical narratives of US prisons—those that dramatize their violence or offer escape through empathetic tales of transcendence—in favor of a conceptual approach that prioritizes quotidian (albeit personal and traumatic) encounters with the system. Last fall, viewers in New York, where the Los Angeles–born artist is now based, could get an overview of her work at institutions around the city. The Queens Museum hosted her solo show “Ordinary Violence,” and works by Smith appeared in “Trigger: Gender as a Tool and a Weapon” at the New Museum and “Fictions” at the Studio Museum in Harlem. In video, photography, and sculpture, Smith maps her relationship with her father onto the physical spaces that contain it. Her 2017 artist’s book Landscapes & Playgrounds extends her analysis to text, similarly centered on sites of experience—the prison, the playground, the club, and the landscape—while exploring the violence, control, pleasure, and release that attend visits to them.

In Landscape I (2017), the neon text reads “And there are plenty bois out there screaming.” While focused on her father’s incarceration, Smith’s work reminds viewers that his experience is also a common one. “For there to be a landscape,” Georg Simmel writes in “The Philosophy of Landscape,” “our consciousness has to acquire a wholeness, a unity, over and above its component elements, without being tied to their specificity or mechanistically composed of them.”1 Smith takes this “consciousness” created by landscape art—where perspective grants the natural scene a compositional wholeness—and applies it to man-made systems. She works in the landscape genre insofar as she focuses on the relationship between individual phenomena and the structures they make up.

Landscapes offer sublime views, both in the colloquial use of the word (where “sublime” denotes mere enjoyment), and in the sense of an aesthetic encounter with danger or power, witnessed from a safe distance. In the latter, Kantian sense, the observation of nature from a distance allows the viewer to see “a power that has no dominion over us.”2 Smith’s work challenges the tendency of distance to make some viewers feel too safe. She also draws on conflicting meanings of the word “landscape,” which can both describe an expanse of untouched nature and suggest the aesthetic control over nature through representation, and that promises realistic depiction even while offering escape from reality. Critic Alex Fialho focuses on Smith’s rejection of this escape, arguing that her “recent works bring landscape and its projections of escapism into collusion with incarceration and its structures of confinement.”3 One might expect Smith’s work to force a confrontation with reality’s brutal details; instead, she manipulates images to cut off access to them, obscuring them to undo the landscape’s promise that a viewer can take in another’s experience at a glance.

To say that Smith’s work rejects escapism, however, is too simple, given that she also draws on images meant to offer some escape to inmates themselves. Central to Smith’s project is a series using photographs that inmates paid their jailers to take with their visitors in front of exterior-scene mural backdrops. Though these images function as a sort of souvenir—creating a fictionalized memory of freedom—they are also produced and paid for by forced labor: the murals are often painted by inmates themselves, who pay for the photos with money they earn by working (visitors are not permitted to pay). In 7665 Days and 7665 Nights (2017), Smith frames examples of these photos with black suede: two small color photographs, each dated 08/10/2014, depict a man and two women standing in front of a tropical mural; the man’s pants read “DCR Prisoner.” In 7665 Nights, a black band cuts across this picture, hiding the subjects’ faces; a photograph of a red sunset replaces the upper portion of the mural. In 7665 Days, two smaller black bands cut across to isolate the man’s eyes and smile. The obscuring bands conspire with the pants’ label to undo the photograph’s implication of freedom.

Another pair from the same series, 7666 Days and 7666 Nights—Falling (2017) manipulates the original image to further obscure its subjects. In 7666 Days, the only one among these examples where the photograph is oriented horizontally (in landscape), three people embrace in front of an oceanic backdrop, their faces replaced by cutouts of seas of various hues. In 7666 Nights—Falling, a black-and-white waterfall is superimposed over the bodies in the same photo from 7665 Nights. These gestures limit the viewer’s perspective. When one realizes the pictures are of the artist’s family—Smith, her father, her grandmother, and her aunt appear in the various images—the feeling of restriction intensifies: even when staged by the state, a family photo has privacy and intimacy that cannot be accessed by outsiders. Smith suggests that her interventions also permit the images to represent more than one family, describing these works as a “mass portrait” of people caught up in the prison system.4

Smith’s videos fall on either end of the spectrum between distance and proximity in her project. How We Tell Stories to Children (2015) and Men Who Swallow Themselves in Mirrors (2017)—which were projected on adjacent walls of the same gallery at the Queens Museum—offer the greatest sense of closeness. Smith’s father speaks directly to the camera, and Smith places fewer obstacles between the viewer and her subject than she does in the photo works. Her father’s storytelling, however, is interrupted by moving shots of a city from street level, slow-motion footage of a body falling, and clips from other films (such as Charles and Ray Eames’s Powers of Ten). Music occasionally replaces diegetic sound. In Men Who Swallow Themselves in Mirrors, her father narrates a story of his three-year-old daughter noticing a pistol in his waistband; while he describes his attempt to answer honestly, the first-person account emphasizes his role as father rather than his incarceration. Though there’s no explicit call in Smith’s project for prison abolition, the argument is latent in every account of separation, of bureaucratic obstacles to familial and social ties; to that end, her father’s narration is not included as an answer to the question of guilt, but rather as a document of experience.

On the other end of this spectrum, Untitled: Father Daughter Dance (2013–17) depersonalizes the scene of visiting. Here, Smith emphasizes distance in the medium itself; the nine TV monitors, in three stacks of three, provide a visual reminder of video’s surveillance function, and the black casing imposes bars between each channel. The videos multiply and loop actions compelled by bureaucracy. Some channels show the artist sitting on and standing up from a waiting room chair. In others she raises her arms in preparation for a pat down or shows the camera that nothing is attached to the soles of her shoes. At times, many channels go dark at once.

Combining handwritten letters from her father with aerial shots of penitentiaries, Smith’s book Landscapes & Playgrounds reads like an analysis of her overall project. A green spiral binds the blue cover bearing a yellow palm tree, and the book opens onto the reverse image of a scan of a handwritten letter, so that the text is minimally legible (through the blue lines of the notebook paper, you can just make out “Love, Dad” at the page’s bottom). In one section, Smith describes the importance of musical refrains: “how easy music lends itself to being remembered”—a reference, perhaps, to the sampling of Al Green’s Love and Happiness in her video How We Tell Stories to Children (2015), where it accompanies footage of her father buzzing his hair. Smith’s use of refrain emphasizes the repetitive and bureaucratic elements of carceral life. Her project takes a holistic approach, using repetition as a formal principle that allows each work to comment on or add to others’ effects. The dark ordinariness, for example, of a blown-up screen-printed image of a coloring book pigeon outline (Untitled, 2017), with a text bubble that reads “Thanks for visiting!” becomes clearer after reading Landscapes & Playgrounds. There, the same bird introduces children to the prison’s waiting area through a series of games and prompts; one aspect of the subjective experience of visiting is conveyed by the banal repetition of this encouraging pigeon.

Landscapes & Playgrounds raises the stakes of both obfuscation and visibility, implying that the freedom to not see might be a white one. In “And Here Is a List of Names” (on a smaller black page with white text, set off by its size from the rest of the book), she recounts seeing a group of siblings play a game on a train. She compares them to herself: “They are my complexion.” She overhears the youngest boy say, “Oh shit, I still have one more life because I didn’t know.” Smith starts a new paragraph to address him and end the text: “And I just think You, you are not allowed to not know.” I have personally experienced this permission to not know: my own father was a guard at the federal penitentiary in Terre Haute for most of my childhood. On the other side of the system, a dad can shield his daughter from reality’s details.

In the titular chapter of her 2010 book The New Jim Crow, civil rights lawyer and professor Michelle Alexander discusses the media’s unwillingness to name the mass imprisonment of black men. She begins with a reference to Barack Obama’s address to the Apostolic Church of God in Chicago on Father’s Day 2008, when the then Democratic presidential candidate criticized black fathers for being “missing from too many lives and too many homes.” Alexander states that “the media did not ask—and Obama did not tell—where the missing fathers might be found.”5 She notes that this is equally true of responses from the right and the left; no one addressed the fact that “more African Americans are under correctional control today—in prison or jail, on probation or parole—than were enslaved in 1850.”6 Alexander’s book challenges the wide-scale rhetorical and institutional attempts to escape the implications of the US criminal justice system’s racism.

In her essay “Ecstatic Resilience,” Smith writes about nightclubs as “a sanctuary for queer liberation;” she reminded listeners that “dance, however, is not an escape.”7 To refuse to let landscapes, dancing, even sex, become easy escapes is to refuse to let the audience turn away.