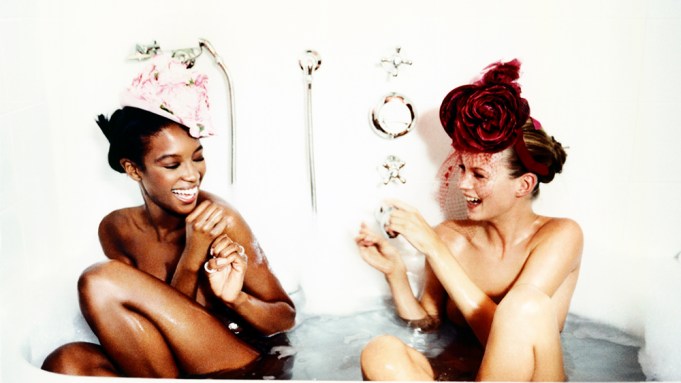 After a few false starts and what felt like several millennia of subway ads, the Swedish for-profit photography museum Fotografiska has opened its Manhattan branch—the third in a swelling international franchise. Extremely swanky and incredibly mediocre, the new outpost at the intersection of Twenty-second Street and Park Avenue has six floors, 45,000 square feet, a gift shop, a café/bar, an event space, an elegant 115-seat restaurant, and even a few photographs. In this setting, these photographs register less as aesthetic objects than as ciphers for topics that the urban haute bourgeoisie care about or pretend to care about: Climate change! Racial injustice! Sex! Movie stars! Rihanna! Poverty! After a while, whatever grace the individual works might have dissolves in the glibness of the presentation.

When I attended Fotografiska’s opening reception, on December 14, patrons sipped wine in the galleries, looking ready to be Instagrammed at the drop of a hat. Why shouldn’t they? They were standing in one of the most gorgeous buildings in New York, the Church Missions House, designed at the end of the Gilded Age by Robert W. Gibson and Edward J. Neville Stent. After decades as the headquarters of the Domestic and Foreign Missionary Society of the Episcopal Church, and many more in the hands of the Federation of Protestant Welfare Agencies, the building acquired a decidedly secular allure in 2018 when it was revealed that kooky, crafty Anna Sorokin (better known as Anna Delvey) had insisted, with characteristic disdain for math or common sense, that she was financing a “cultural center” set to open there. Fotografiska suggests a curious mishmash of the Church Missions House’s previous iterations, real and imagined, a kind of charity-vanity project. At $28, admission is steep, and a meal at Veronika, the restaurant soon to open on the second floor, promises to be several times steeper. Yet Jan and Per Broman, Fotografiska’s cofounders, insist that they aren’t merely maximizing profits but “inspiring a more conscious world,” as the tagline has it. By paying for expensive tickets and food and coffee, in other words, you’re actually funding some kind of social good, and if you also get to look sexy strolling through the dim, spotlit rooms, so much the better.

Whatever it takes to get people to support the arts, it’s tempting to say. Fotografiska’s original Stockholm venue has drawn some four million people through its doors in the last decade. But in New York, at least, the photographs come across as afterthoughts. The chic restaurant-style lighting falters when applied to images or paragraphs of wall text; their centers burn like suns while the edges fade into darkness. The presentation becomes especially awkward in the largest exhibition, featuring German fashion photographer Ellen von Unwerth’s witty, nervy shots of women. The overwrought drama of the gallery clashes with the anecdotal charm of the images themselves; they’re like sunflowers in a sex dungeon.

Here and in the four other shows, you get the sense that Fotografiska is pounding the square peg of the artists’ work through the round hole of the museum’s brand. With this in mind, it is telling that the work of the Swedish environmental photographer Helene Schmitz succeeds precisely where it fails as good liberal politics. Supposedly an “account of the abusive relationship between humans and nature,” the show provides something more like an account of the uncanny sublime of climate change, from the grisaille of a scorched forest to the pointillist rainbow of a copper mine. Her photographs are always a few steps ahead of the facile moralism the exhibition imposes upon them. As such, they’re a grim reminder, if another was needed, of why virtue-signaling institutions like Fotografiska won’t save us from ourselves—we can’t aestheticize our way out of environmental ruin.

Next, two bumbling shows with oddly similar aims. The work of the Israeli photographer Adi Nes, we’re assured, evokes “iconic Renaissance and Baroque paintings embedded into our collective memory, but with a twist.” I’ll say. Nes, who completed his mandatory military service in the 1980s, is fond of shooting buff, shirtless soldiers in would-be classical poses. His most famous photograph, Untitled (The Last Supper Before Going Out to Battle), 1999, which appears in Fotografiska’s exhibition, has little in common with Leonardo’s mural besides the number of subjects, so that the resemblance begins to seem less like well-considered appropriation and more like a cheap grab at importance. For all the big talk of the Old Testament and old masters, Nes’s oeuvre for me recalls nothing so much as the sterile, swaggering homoeroticism of Leni Riefenstahl.

What Nes does to the Renaissance, portrait photographer Tawny Chatmon does to the Vienna Secession: she embraces it as her own so enthusiastically that she nearly throttles it to death. Chatmon—“a mother of three black children,” per the reliably on-the-nose wall text—slathers photographs of her offspring in 24-karat gold leaf in homage to Gustav Klimt as her way of inserting black bodies in the Western canon. This is a worthy endeavor (Kehinde Wiley has done something similar, with spectacular results), but the images have turned out clumsily, adolescently earnest. Chatmon seems to think that gluing gold to a picture is the same as channeling Klimt, when in truth it just draws attention to the chasm between the two artists’ talent, inventiveness, and subtlety. The only things more obnoxiously self-defining than Chatmon’s photographs are their syrupy titles, which sound like Instagram captions: The Boy That Changed My Life Honored, The World Is Imperfect, but You . . . , God’s Gift. Was she worried we’d miss the point without the titles bellowing in our faces?

The show that ends this strange, uneventful visit is “Other People’s Children,” for which photojournalist Anastasia Taylor-Lind spent five months following the frantic lives of New York caregivers. It’s impeccably moving, and the calculated sentimentality is enhanced by a soundtrack of toddlers playing and crying. If you get too weepy there’s a play area not too far away with squat tables and markers for writing on the walls. Whether it was meant for kids or adults I couldn’t really tell. Somewhere in a cell on Rikers Island, Anna Sorokin may still be dreaming of the day she’ll open her own arts foundation in the Church Missions House. From what I saw, she couldn’t do much worse.