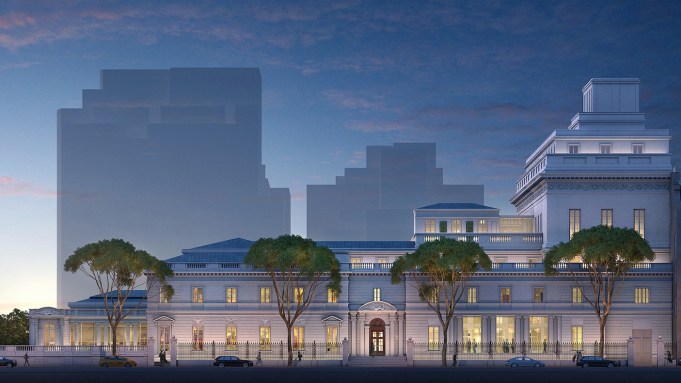 Long thought of as a museum where little changes, New York’s Frick Collection has announced plans for an extensive expansion and renovation to its museum and library.

The plan, including construction of a six-story building on East 70th Street, is pending public reviews by the New York City Landmarks Preservation Commission and other authorities, according to the museum. If approved, construction, during which the museum and library are anticipated to remain open, will begin in spring 2017, with completion projected for 2020. The museum declined to reveal the projected cost of the expansion, which would follow the Beaux-Arts style of the current building.

The renovation would open to the public for the first time several lavish rooms on the second floor of the Upper East Side mansion, including former bedrooms, a study and a breakfast room.

Since the founder’s death in 1919, the collection has continued to expand; the paintings collection has grown by a third. The museum underwent successive renovations in 1924, 1935 (when the six-story Frick Art Reference Library was constructed), 1977 and 2011 (when an exterior portico was transformed into a gallery).

Expansion is necessary due to growing attendance, especially for special exhibitions, according to the museum. Recent shows have included a selection of works from the Mauritshuis in The Hague, which included Vermeer’s Girl with a Pearl Earring and Carel Fabritius’s The Goldfinch. Annual attendance is typically about 300,000, but reached 420,000 last year.

Lost in the expansion will be the 70th Street garden and the 1977 addition, which includes the area where visitors currently check coats and buy tickets.

Founded by coke and steel magnate Henry Clay Frick (b. 1849) in 1914 and opened to the public in 1935, the Frick Collection resides in a mansion built by Thomas Hastings of Carrère and Hastings. Its collection of about 1,200 items—including paintings, sculpture and decorative arts—spans the Renaissance through the 19th century, including works by Constable, Corot, Goya, El Greco, Ingres, Renoir, Titian, Turner, Velázquez and Vermeer. The museum is especially known for its intimate installation, where works of art are not placed behind ropes or glass, and various art forms are displayed together in the style of a private home. The Frick Art Reference Library comprises some 250,000 books and catalogues, 80,000 auction catalogues and 1.2 million photographic objects.

Davis Brody Bond designed the National September 11 Memorial Museum at the World Trade Center and the Smithsonian Institution’s National Museum of African American History and Culture, now under construction. The firm oversaw the 2011 alteration to the Frick.