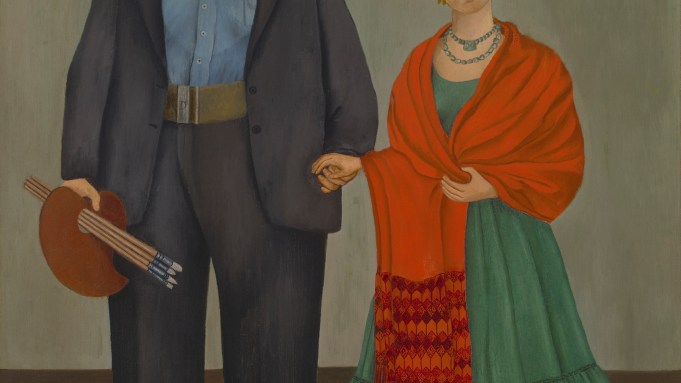 Just over four months after the Detroit Institute of Arts was officially rescued from the threat of liquidation due to citywide bankruptcy, the museum opened a stunning show on Mar. 15 of works by artists Frida Kahlo and Diego Rivera. This first major exhibition since the settlement is a victory for the city Kahlo and Rivera once called home.

The survey of 65 works, selected to document and contextualize the two Mexican artists’ formative year in Detroit, was in development for several years before being put on hold due to “interesting financial circumstances,” said the DIA’s director, president and CEO, Graham Beal, in a press conference. But for their comeback exhibition of sorts, the DIA could not have hoped for more appropriate subjects than Rivera and Kahlo.

The famed couple spent a year in Detroit while Rivera created Detroit Industry, a mural for the museum. The work was commissioned in 1932—a time in the city’s history that was similar to today, noted exhibition curator Mark Rosenthal. At that time the Depression had the city in its grips, and police brutality and immigration were hot-button political issues.

“The number of reverberations between then and now becomes horrible, frightening and amazing,” Rosenthal said. “Things were so bad in 1932 that there was discussion of closing the museum and selling the collection.”

The exhibition’s linchpin (though technically not part of it), Detroit Industry (1933) is a sprawling mural depicting the power and complexity of the American auto industry covering 27 panels of an indoor courtyard in a separate part of the museum. The staggeringly holistic work, complete with references to nature (fossils and childbirth), Mexican gods, communist symbols and capitalist abuses (weaponized gasmaking, oppressive factory bosses), was controversial when it was unveiled, but it was revered by workers who viewed it.

According to a video in the exhibition, Rivera said that the laborers’ approval “seemed to be the realization of my life’s dream.” (Refreshingly, all didactics were offered in English and Spanish.) For the rest of Rivera’s life, Rosenthal said, the artist “felt that Detroit Industry was his greatest work.”

Many of Rivera’s 38 works on view relate directly to the mural, including scale preparatory drawings that had not been shown for nearly 30 years. Others were made during the years immediately before and after his stay in Detroit, contextualizing the mural’s place in Rivera’s larger oeuvre. Earlier paintings include classically composed depictions of everyday Mexican life, like Flowered Barge/The Flowered Canoe (1931). Later pieces include the painting Dance in Tehuantepec (1935), a return for Rivera to the kinds of everyday Mexican folk subjects he depicted before coming to the United States, created after he and Kahlo eventually returned to Mexico.

The much younger Kahlo, meanwhile, seems to have discovered her defining artistic vocabulary in Detroit—a central and convincing thesis of the exhibition. Kahlo’s fame has perhaps outstripped her husband’s in recent decades, but she was unknown as an artist when she came to Michigan at just 24 years old. She arrived at the train station two months pregnant and, according to news reports, holding a ukulele. Asked if she was also a painter, she told journalists, “Yes, the greatest in the world.”

Her paintings from the era reveal a Kahlo with less swagger. Several drawings made shortly before her year in Detroit hint at the brutally honest, sexually ambiguous Surrealism that would soon characterize her most famous work. But a painting from 1931, Frieda and Diego Rivera [sic], in which Rivera holds a paintbrush in one hand and the demure and exaggeratedly diminutive Kahlo’s hand in the other, as she clutches her shawl closely, seems to demonstrate her still-developing confidence.

The horrific loss of her pregnancy on July 4, 1932 (recent scholarship suggests the miscarriage was self-induced, her second abortion) seems to have galvanized Kahlo’s artistic vision. In the hospital, she drew Self Portrait, 9 July 1932, which depicts her wearing a hospital hairnet—typical of the type of autobiographical, symbolically charged frankness that would characterize famous later works like Self-Portrait with Cropped Hair (1940) and Self-Portrait with Monkey (1945).

Kahlo’s work also got graphic. Soon after the abortion, she painted Henry Ford Hospital (1932), a gory depiction of herself crying and bleeding in a hospital bed while attached by multiple umbilical cords to various objects, including another fetus, a snail and a flower. In the background rise the smokestacks of the Ford factory; the bed is inscribed “HENRY FORD HOSPITAL DETROIT”—lettering Rosenthal said he thinks did not appear in real life.

Such open jabs at her husband’s benefactors permeate her work from this time. For all the encouragement Rivera gave Kahlo, she disliked that he kept her in the United States, and an antagonism is present in the work. The bloody, supine women victimized by violent men and capitalist landscapes foreshadow later paintings like Suicide of Dorothy Hale (1938) and A Few Small Nips (1935), the latter of which depicts a naked, bloody woman in bed who has been repeatedly stabbed by her husband.

Ultimately, Kahlo’s experiences and perspective seem to have affected Rivera. Shortly after their Detroit experience, he, too, began souring on industrialism, as evidenced in his watercolor Mechanized Motherhood (1933), which, he said, was meant to criticize “the Capitalist system’s use of machinery as a means for exploiting mankind.”

“He’s no longer in love with Henry Ford and industrialization,” Rosenthal explained. “But what’s most touching is, what is the vehicle by which he shows it? Motherhood.” Rivera’s love affair with industry indeed proved short-lived. After Detroit, a lost commission in Chicago and the infamous destruction of his mural at Rockefeller Plaza, he and Kahlo returned to Mexico. He would never paint industry again.