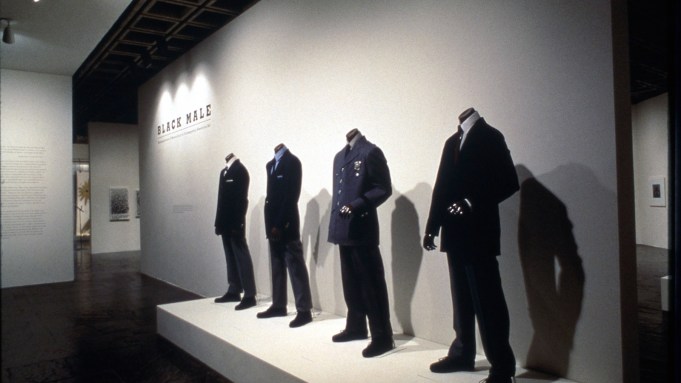 “Black Male: Representations of Masculinity in Contemporary American Art” was a landmark exhibition at New York’s Whitney Museum of American Art organized by curator Thelma Golden in 1994. Art historian Linda Nochlin lauded the show in our March 1995 issue. In her essay Nochlin not only discusses the exhibition’s dissection of stereotype and caricature in depictions of black men, but also describes how it taught her to look differently at historical artists such as Manet and Poussin. “I was struck by how preternaturally white all of Poussin’s figures are-obvious, of course, but for that very reason, unnoticed before. Not just white, but different shades of white, ranging from chalky matte pallor to rosy, ivory tones,” she writes. “But then again, not quite all. Alerted by the Whitney show, I noticed that the figures in Poussin’s largest painting,The Miracle of St. Francis Xavier, 1641, are not white at all, but yellow.” We are publishing Nochlin’s essay online in recognition of Black History Month.

The “Black Male” show at the Whitney Museum is one of the liveliest and most visually engaging exhibitions to have appeared in New York this season. Richly disparate in its offerings, ranging from traditional painting to pure textuality, from photography to the altered object, from video to installation, the show (which will open at the UCLA/Armand Hammer Museum, Los Angeles, in April) reaches out to the viewer’s eye and intellect at once. It is a multicultural event in the best, and strictest, sense of the term. Although the show’s title succinctly announces its unifying theme, the representations of the subject are as varied as the artistic imaginations involved, and the artists themselves include both people of color and whites, women as well as men, gay and straight people. The visions of black manhood they articulate are variously negative and positive, stereotypical and questioning, ambiguous and interestingly ambivalent, realistic and abstract. In general, the imagery on view speaks also of sophistication and visual inventiveness. The show challenges preconceptions even as it works, often poignantly, sometimes angrily and painfully, with misconceptions.

Of course, this is a highly political art, with all the attendant felicities. And perhaps because it makes no attempt to conceal its social engagement, the show has received an unwarranted share of dismissive or less-than-serious reviews from the mainstream press. Somehow, the notion that art might be concerned with representation, stereotype, truth and justice while at the same time maintaining a highly inventive formal and esthetic standard has, in recent years, been pushed aside by the flood of cheap anti-“political correctness” rhetoric spewed out by the popular media. This flood has now apparently crept up to higher levels of criticism as well. Whatever one makes of the current jihad against political art, the fact remains that the great Western tradition of art has always included questions of identity, of ethnicity, of national and ethnic representation, and, indeed, of outright political debate within its capacious embrace. Only very recently has Western art been distilled—or reduced—to an essence of pure form, in which any tincture of social comment is considered a taint.

Before going on to a more detailed consideration of the “Black Male” exhibition, I should like to make my own position clear. Yes, I am a believer in multiculturalism; yes, I feel that politics and social issues play an important role in both art and criticism. Why else would I be teaching David, Goya, Manet and Daumier these many years? I believe in inclusiveness—in openness to other visions and articulations besides the mainstream ones approved by the purity police. But I am also totally immersed in the great historical tradition of Western high art. And I am an esthetic creature to my very fingertips. I, like many feminist art-historical friends, swoon over Cézanne and Manet, Fragonard and Watteau, at the same time that I vibrate to Cindy Sherman or Kiki Smith or Adrian Piper. Not for nothing did I title my most recent public lecture “Why the 1860s Is the Best Decade of the 19th Century—Or Any Other.” The “Black Male” show could not have come into being outside the Western tradition, which of course includes within it, as part of its very nature, a legacy of protest and violent negation of its own values.

My first look at the “Black Male” show took place on the eve of my departure for Paris to see the great Poussin exhibition at the Grand Palais. From Paris I went on to South Africa, where, amid the unfolding of a new multicultural world, I gave a lecture on Mary Cassatt. Seeing Poussin with the “Black Male” show still on my mind made me look at this brilliant, classical but quirky artist differently. I was struck by how preternaturally white all of Poussin’s figures are—obvious, of course, but for that very reason, unnoticed before. Not just white, but different shades of white, ranging from chalky matte pallor to rosy, ivory tones. But then again, not quite all. Alerted by the Whitney show, I noticed that the figures in Poussin’s largest painting, The Miracle of St. Francis Xavier, 1641, are not white at all, but yellow. For depicting this incident, which had taken place when the saint was a missionary in Japan, Poussin used contemporary prints delineating Japanese physiognomy as the basis for his characters, who represent the different stages of understanding that accompanied the miraculous resurrection of a young girl in Kagoshima—astonishment, surprise, gratitude, despair.

But the shifts in my perception of Poussin weren’t limited to matters of skin color. The “Black Male” show also emphasizes the role of gender—the ambiguous status of maleness itself—and it made me realize the remarkable extent to which Poussin’s work involves gender issues. Mapplethorpe’s startlingly estheticized photographs of black male models, as well as Lyle Ashton Harris’s witty “Constructs” (1989), nude and seminude self-portraits, deliberate in their anti-estheticism, stayed with me, as did Dawn Ader DeDeaux’s gold-leafed Rambo (1991) and Jennie Livingston’s film Paris is Burning (1990). Together they shed new light on paintings like Poussin’s Narcissus, in which the title character offers up his lovely, doomed body to the spectator like a gift on the surface of the picture plane. They also made me think differently about paintings like Renaldo and Armida, Tancred and Herminia or Achilles Among the Daughters of Lycomedes, in which sex-role reversal is involved: men are in drag, or a  powerful woman gazes down amorously at a beautiful, sleeping, available man.

Of course, the point of the “Black Male” show is not, primarily, to enable the viewer, black or white, to revise the great Western tradition. Rather, the works it presents call into question the vicious tradition of stereotype and caricature, omnipresent in both high and popular art but most widely visible in the production of mass culture, that has characterized the representation of the black male in modern times. Gary Simmons, in his installation, Step in the Arena (The Essentialist Trap), 1994, makes this point vividly with a synecdoche of reductivism: two kinds of shoes, tap and boxing, stand for stereotypical “achievement.” The path to success for the black man has been reduced to the role of entertainer, a limitation marked off by the boundaries of the “ring” itself, and further evoked by the blurred choreography defining its surface.

Yet of all the artists in the “Black Male” show, Robert Colescott most vigorously confronts the black stereotypes of popular culture. He embeds them in the icons of the Western tradition itself and sends up both through brilliant and tremendously bitter parody, a parody which depends as much on formal strategies as it does on outrageous revision of subject matter. Such parody was, of course, not unknown to the French 19th-century vanguard. Think of Manet’s deadpan send-up of Giorgione’s Fête Champêtre in his modish Déjeuner sur l’herbe, or of Titian’s idealized Venus in the brazen Olympia. Likewise, caricaturists depended on hilarious parody to pillory the past, as in Daumier’s series on the outmoded performances of classical drama or Homeric poetry. But in a work like Colescott’s Temptation of St. Anthony (1983), the specificity of the stereotype—the black man tempted by comic-strip images of white pulchritude—gives new meaning to the old trope of exaggerated homage. The stereotype of resistance to lust is both embodied in and deconstructed by the humorously intensified painterliness of the brushstrokes. Colescott overloads his academic prototype with the banality of pulp fiction and the yellow press, sources of sexual intensity from which, incidentally, the youthful Cézanne also drew for his versions of this subject.

But it is precisely in moving away from stereotype, as well as the easy construction of “positive” images, that some of the most original photographic artists in the show repudiate the very notion of an emblematic black male. Instead we get ambiguously constructed instances in which individual artists—in these cases, black women—confront, with a sophisticated and contemporary self-consciousness, particular instances of their subjects. Carrie Mae Weems, in her Untitled (Kitchen Table Series), 1990, explores the domestic relationship between a specific black man and woman in minute but fragmented detail, so that the spectator, as curator Thelma Golden points out in her perceptive introduction to the catalogue, is encouraged the enter the narrative. Lorna Simpson, in her photographic series “Gestures/Reenactments” (1985), uses a visually reduced yet intellectually complex interweaving of text and image to construct an individual in terms not merely of his body, but of his relationships to the wider community of family and friends. Still other photographic works, like Renée Cox’s It Shall Be Named (1994), refer back to traditional art forms—in this case, the shaped crucifixes of 13th- and 14th-century Italy—with deep solemnity. The modern “distortions” and elisions of Cox’s representation interact with the reference to iconic martyrdom to evoke the terrible history of lynchings, beating and emasculation visited on the bodies of black men in this country.

Whatever one thinks of the current jihad against political art, the Western art tradition has always included ethnic and national concerns in its embrace. In South Africa, at the National Gallery in Capetown, members of the Ndebele nation had enlivened the Neo-Classical facade of the building with colorful architectural decoration. Within was a striking show of remarkable art and architecture, beadwork and exterior decoration, produced by a group ravaged by the dislocations of colonialism and apartheid who nevertheless rebuild their national traditions, mainly through the cultural productions of women. “This,” said the museum newsletter, “can inspire all South Africans in our search for renewal, reinvention and nation building.”

In the next gallery, fortunately tucked away in relative obscurity, was a memento of colonialism’s contribution to the great Western tradition in South Africa. This group of 10th-rate foxhunting scenes had been donated to the gallery by a wealthy benefactor with the proviso that they always remain on view, as one shamefaced young curator admitted to me as we hurried by to see the Ndebele achievement. It was just a reminder that the Western tradition is not always so great; it contains a lot that suffers in comparison with the production of so-called minorities and the cultural workers of the “Third World.”

Such worthlessly enshrined relics also remind us that we who have inherited that tradition must constantly revise, deconstruct and reconsider it in the light of present-day concerns and passions. The “Black Male” show powerfully demonstrates the many ways in which this obligation may be accomplished. Without this force of critical, often excessive renewal—a renewal, it seems to me, now best accomplished by formerly marginalized groups and individuals—the Western tradition is not a source of vital cultural life at all but a ritualized entombment, the burial celebration of dead artifacts by ossified sensibilities.

The Best Men’s Baseball Caps for Topping Off Any Outfit