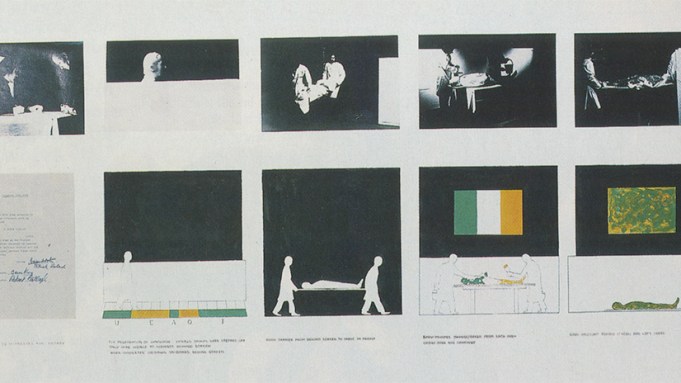 The work of Brian O’Doherty, who served as editor of this magazine in the early 1970s, is included in “Forty,” a group exhibition at MoMA PS1 marking the institution’s fortieth anniversary. It’s an occasion for us to publish writing by and about O’Doherty from our archives online. “Decoding O’Doherty” by Saul Ostrow, a monographic 2007 essay responding to a traveling retrospective, offers a thorough overview of his work as an artist. In his 1971 article “What Is Post-Modernism?,” O’Doherty tackled a thorny buzzword. In “An Artist & His Aliases,” presented below, Thomas McEvilley analyzes O’Doherty’s uses of pseudonyms, connecting his games of concealed identity to procedural works made through codes and ciphers.—Eds.

It’s fairly common knowledge that Patrick Ireland, the artist, and Brian O’Doherty, the art critic, are one and the same person. Far less known are the story and the political stance behind this double identity, and the fact that Ireland/O’Doherty has assumed a number of other personae during his career.

Born in Ireland in 1928, O’Doherty emigrated to the U.S. in 1957. Fifteen years later, events in Northern Ireland led to his formal change of identity as an artist. On a day in 1972 that came to be known as Bloody Sunday, hundreds of Irish civilians were marching in the Bogside section of Derry to protest the internment of political activists. British soldiers opened fire on the marchers. Thirteen were killed. Later that same year, at the Project Art Center in Dublin, O’Doherty pledged, before 30 witnesses and a notary, to sign his art works with the name Patrick Ireland “until such time as the British military presence is removed from Northern Ireland and all citizens are granted their civil rights.” In this identity-change performance, he had his naked body painted orange (the color associated with Northern Ireland’s Protestants) from the head down and green (the color of Ireland’s Catholic nationalists) from the feet up. Each color was carried through to the other end of his body until it was uniformly covered with a muddy tertiary blend of the two. Ireland recalls that he looked like an atrocity victim.

Against the backdrop of the Northern Ireland peace process, in the summer of 1998 Ireland traveled to Derry for an exhibition of his work at the Orchard Gallery, a municipally funded, internationally known venue for contemporary art. Should the continuing negotiations between the Unionists and Nationalists succeed, it will presumably be time for Patrick Ireland to revert to his original identity as Brian O’Doherty; that was not the occasion of the Orchard Gallery show but still, typically, the exhibition centered on the theme of identity and its mutability.

A key piece in the exhibition was Five Identities, in which Ireland documents his artistic guises. Interestingly, he includes “Brian O’Doherty” as one of the five, implying that his birth name is no less of an assumed identity than those he has invented. “Sigmund Bode,” the earliest of O’Doherty’s alter egos, dates from his years as a student in Dublin in the 1950s. As well as pursuing medical studies, O’Doherty was exhibiting paintings in both Dublin and London and was irritated by the limits on taste in those two cities, especially Dublin, where the only acceptable art was, he recalls, “third-generation Cubism.” The name Sigmund Bode derives from Sigmund Freud and Wilhelm Bode; the latter was director of a Berlin museum in the early 20th century and also an artist. As Sigmund Bode, O’Doherty would make art works—small, Klee-like drawings—that were entirely different from what was acceptable in Dublin. O’Doherty created the drawings, signed them with Bode’s name and submitted them to galleries; no one would exhibit them, which was the point—a cultural dividing line had been located and confronted.

In the early 1970s, O’Doherty, whose writings on art include the influential volume Inside the White Cube: The Ideology of the Gallery Space, published a few parables and pieces of art criticism (some of it in Art in America, where he served as editor from 1971 to 1973) under the name “Mary Josephson.” The child of devout Catholics, O’Doherty was given the name Brian Mary, and his confirmation name was Joseph: he was Brian Mary Joseph. More than a simple switch of gender, his Mary-and-Joseph-and-son persona represented the holy family as a universal principle incarnate in the individual.

“William Maginn,” yet another of O’Doherty’s identities, was a nod to a 19th-century Irish poet who himself wrote under various pseudonyms, including Morgan O’Doherty. An emigré like Brian O’Doherty, Maginn lived mostly in London, where his circle of friends included Coleridge, Southey and Thackeray. After years of collecting material on Maginn, O’Doherty is about to publish a novel, The Deposition of Father McGreevy, parts of which he attributes to his 19th-century doppelganger.

The Orchard exhibition was the first public disclosure of the Bode, Josephson and Maginn impostures. Beneath photographs of O’Doherty in the guise of each persona—as Maginn, he sports a wide-brimmed hat; as Josephson, he appears in drag—was a vitrine containing examples or accounts of “their” activities: articles, reviews, etc. One understood that these were not mere pranks but a way of commenting on the nature of identity. The subject was also explored in The Transformation, Discontinuity and Degradation of the Image, which consists of six strips of photo-booth portraits of O’Doherty taken between 1969 and 1998. These have a strange quality; affectless, they are like mug shots or passport photos but even more impersonal—like laboratory shots of a specimen from various angles.

O’Doherty also showed 10 gridded plans for his “Structural Plays,” a group of performances from the late 1960s. In them, two participants move around grids of 3-by-3-foot squares while speaking lines written by the artist. Drawings for the grids were accompanied by wall panels bearing the text which, spoken during performance, dictated the performers’ movements. The number of words in a sentence spoken by a participant, for example, determined how many spaces he or she would move on the grid. The chesslike aspect of the piece was a reminder that Marcel Duchamp was one of O’Doherty’s early influences.

The fifth, and final, gallery work bore the Swiftian title Modest Proposal for the Relocation of the Six Northern Counties (If Ireland which while Creating some Difficulties for the Inhabitants of Mullingar and Environs Affords Increased Fishing Opportunities from the Donegal Peninsula as well as Encouraging Dialogue between the Citizens of Northern Ireland and the Republic. The work consisted of a radically reconfigured map of Ireland in which Northern Ireland had been cut out and collaged over the Republic, establishing the conditions described in the lengthy title. The act of combining north and south resembled the symbolic unification O’Doherty accomplished in 1972 by covering his body in orange and green paint.

The Orchard Gallery exhibition was also the occasion for a performance of Vowel Grid, a conceptual work from Ireland’s “Ogham” period (1967-72), so named for his use of the eponymous ancient Gaelic sign system. Ogham was at one time regarded as an encryption of some lost, runic language. Nowadays that view is dismissed as romantic, and Ogham is recognized as a transliteration of 20 letters of the Roman alphabet. In a series of drawings created 30 years ago, O’Doherty worked out a numerological system based on the Ogham vowel signs. Through this system, which involved assigning a numerical value to each vowel and representing that value by a corresponding number of dashes, which are equivalent to the same number of spaces on a grid, he arrived at the 225-square arrangement plan he used in Vowel Grid. The piece requires two participants to walk across a grid laid out on the ground. At various points in their traversal, which takes about 15 minutes, they halt and, in a somewhat drawn out, ritualistic manner, utter aloud an Ogham vowel.

For O’Doherty, the formal properties of Ogham are reminiscent of Minimal art. It consists exclusively of straight lines. This “purest sign system ever devised,” as he has called it, may be seen as an early expression of Irish nationalism. Invented toward the end of the Roman Empire, it suggested an unwillingness on the part of the Irish to adopt the Latin alphabet without first nativizing it. Thus, the performance, like the worts in the Orchard Gallery, involved again the theme of Irish identity. Since Ogham script was used on the corners of standing stones that functioned, in ancient Ireland, as boundary markers, its revival also subtly evokes the continuing sense of injustice felt in Ireland as a result of the British takeover of so much of the island’s real estate.

Since its creation some three decades ago, Vowel Grid, for which the individual vowels are also assigned colors, has been realized only four or five times. The 1998 performance (at which I was present) took place on June 27 at Grianan Aileach, an archeological site, popularly known as the Stone Fort, about a 40-minute drive from Derry. Despite the military nature of the place, the name signifies something like “sun room for women.” While sometimes thought to be megalithic, the Stone Fort most likely dates to the 2nd or 3rd century A.D., that is, from the early Celtic period, which is the era of the Ogham script. The fort has the unforgettable look of hand-placed stone masonry that one still sees in so-called Scotch-Irish areas of Appalachia. On the day in question, the weather was clement for the 30-odd people who were bused out from the Orchard and for the two performers who acted out Vowel Grid.

Vowel Grid is a kind of performed drawing. To those who know the simple code, nothing is hidden: each vowel has its color, each color has its number, each number has its length. The performers don’t have to memorize what steps to make and what vowels to utter, it is as if they are reading a script as they walk, and the script is not ambiguous. When the performer who is traversing the shorter distance comes to his new position (determined by an intricate set of regulations) he utters the vowel, then waits for the other to arrive at his destination and utter his vowel. Both performers continue in this fashion until they have crossed the grid. With their perpendicular courses—one going east-west, the other north-south—they are weaving language like warp and woof, forming the basics of a linguistic code out of sound, color, movement and number. The effect is like that of a complex piece of serial music à la Morton Feldman. The performance is nonclimactic, a continuum. Nothing happens, but something is actualized: the code unwraps itself.

Witnessing Vowel Grid, one felt as if something as yet unnameable was about to emerge from antiquity into the present, something long held back and out of play. The 1998 performers, two men dressed in white and wearing white cowls, were Irish, and in a way theirs was like the triumphant dance of an ancient people returning after a long absence. It seemed no empty coincidence that the event transpired on the heels of the May 22 referenda in which the people of Northern Ireland and the Republic voted overwhelmingly in favor of a more united future. Despite the current deadlock, the Northern Ireland peace process appears to be bringing closer the day when Brian O’Doherty will be free to relinquish the identity of Patrick Ireland that he assumed more than 25 years ago.