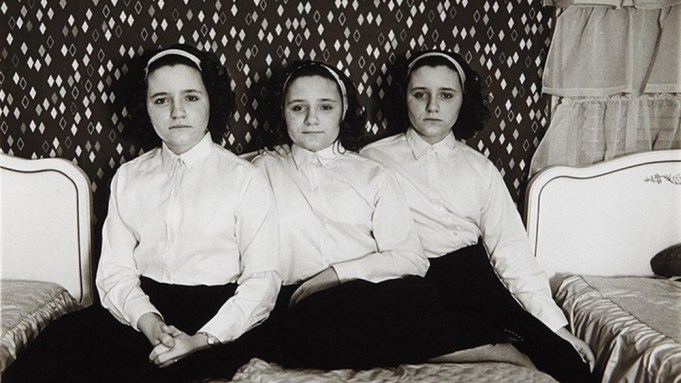 In this article from our March/April 1973 issue, former A.i.A. contributing editor Amy Goldin (1926–1978) discusses the first retrospective of Diane Arbus’s photographs, held at the Museum of Modern Art in 1972. —Eds.

By the commonest standards of art, Diane Arbus is an artist. Her photographs get to us and we acknowledge it in the good old-fashioned way of audiences, we are moved, and grateful for it.

The thing that sends me up the wall is that it ends there. The odd and interesting things she has made, and what they do to our minds and feelings, all that stays in its gift wrappings, unopened. Faced with figurative art, sixty years of abstraction, sixty years of artistic intelligence made tangible, have won us, apparently, nothing. The Museum of Modern Art’s Arbus exhibition was welcomed, in a dry season, as a major event. It was extensively criticized and discussed, yet all there is to show for it is ancient artistic ritual—the social habits and Victorian fog of Art for Art’s Sake. Arbus’s work is interpreted with the flashing acuity of Maureen O’Hara telling Tarzan about Christianity. Only it is esthetic, instead of theological baby talk.

The Arbus show was a winner and the experts handed out both their ultimate laurels. Laurel wreath A is the expanding frontiers of art bit (Blue Ribbon, all classes) and laurel wreath B is the Revelation of Inner Reality prize (Gold Medal, previously awarded to everybody from Michelangelo to Magritte). She “altered the terms of the art she practiced” (Kramer); “challenges the basic assumptions on which most documentary photography has been thought to rest” (Szarkowski). Moreover, she investigated the “deepest recesses and best-kept secrets of the psyche” (Rose); “gets very close to her subjects, far closer than is comfortable for most people” (Thornton); she “records the outward signs of inner mysteries” (Szarkowski again). Ultimately she “altered our experience of the face” (Hughes, in Time). None of this has anything to do with Arbus. Her whole action involves playing with conventions, not dissolving them. Moreover, by insisting on her compassion and sympathy for her terrifying subjects, the critics clean everything up. Where we might have to face the possibility of being involved with something humanly dirty or dishonorable, they reassure us.

The facts are quite different. We are all taught to feel sorry for freaks, and not to stare at them. Arbus photographed lots of stigmatized people—female impersonators, dwarfs, madmen, idiots—and we stare, measuring our distance from them, and our closeness. We taste the horror of our fellowmen, the dread of being touched by them, and gratitude for the distance, and every reviewer absolves us of guilt. They tell us we have nothing to be ashamed of because Arbus loved them enough, and makes us feel pity enough.

We are supposed to be purified by the artistry of it all, just as Victorian critics assured their readers that the artists’ high-mindedness purified the naked, absolving the viewers from prurience. Arbus is not even allowed her risks. As if, in fact, there were no moral risk, and nothing more serious was at stake than the possibility of being snubbed or rejected. In fact, the psychological and moral dangers of courting temporary intimacy are considerable. Every deliberate encounter violates one’s own privacy, as well as the other person’s. One may be asked to give more, for a longer time, than one wishes. As strong capacities entail responsibility, freedom carries its guilts, and empathy its dislocations of self.

I think these photographs cannot begin to be seen unless we admit, immediately, that the risk was real. Arbus may indeed have exploited her subjects, made artistic capital out of their hunger for friendship and acceptance. The desire to be documented in conventional ways is a normal human wish; to be counted, to leave proof of having existed, like everyone else. But people want to be seen on their own terms, and I think it must be admitted that Arbus cheated, and knew she cheated. She saw her subjects her way, and they are invariably consumed. The “documents” became her vision of them, not their own, and certainly nobody else’s. The “straight” photos, the ones of ordinary people and places, demonstrate this, and it is there, I believe, that we can see exactly what has been done.

To begin we must ask how, after all, Arbus’s subjects stand in the world. It seems to us that they stand precariously. Their attitudes vary; they may be brave, sullen, defiant, yearning or complacent, but for us the dominant impression is pathos. For us her people are all losers, whether they know it or not.

This is an amazingly subtle effect to achieve time after time. The slightest loss of composure would ruin everything. Her subjects must not seem to feel too much, lest they destroy the delicate superiority we gain from knowing more of their vulnerability than they do. Nor can they be heroic; we must admire ourselves for respecting them. They must be both gallant and doomed, just as the Victorian nudes had to be both willing and ashamed to show us their bodies. Accounting for the gallantry is easy. The doomed part is harder.

Her subjects’ gallantry lies in their willingness to face us. They are usually disengaged from work or any emotional preoccupation and devote themselves to meeting our gaze. They present themselves according to the conventions of portrait photography, with the deliberate face and body masking that we assume when we arrange ourselves for the camera’s encounter. Gravely, they offer themselves to be recognized. They make the claim to personal identity and social acceptance implicit in the studio portrait. But formal portraiture is combined with the intimacy of locale that comes from snapshots and documentary photographs. We are given all the contingencies of place, the unchosen quality of the site and its props. The people expect us; the situation does not. Thus we see both: an identity that the sitter has chosen to be seen and an environment that we accept as true. An environment that undercuts that choice and turns it into artifice and delusion. As her dominant mood is pathos, Arbus’s central theme is the futility of artifice, the distance between what has been chosen and what is given. Think of the photographs of nudists. How bizarre that these people, with their visible timidity or vanity, should dream of being children of nature! The clash of artifice (carried by poses, clothing, cosmetics) against nature (the unwanted hair and wrinkled skin, the clutter or bareness of urban settings) is the key to Arbus’s special poignancy.

Steadily and subliminally, she says that whatever is artificial is a sad, romantic lie. An iconoclastic Puritanism turns the photomural in A lobby in a building, NYC, 1966 or A castle in Disneyland, Cal., 1962 into emblems of the pathos of illusion.

Consider one of the most subtle of her accomplishments, the shot called Xmas tree in a living room in Levittown, L.I., 1963. Notice first that Arbus’s titles regularly stress the objective documentary dimension of the image. She never gives personal names, and always supplies precise data about time and place. What is personal and social is presented as if it were abstract and sociological. (Though surely here “Xmas” instead of “Christmas” is editorializing!) The interpenetration of documentary and portrait conventions depends on violations of the lighting and focal length normal for each genre. Where the stigmatized subjects are usually shot with a harder light and from a closer-than-normal point of view, the unlit Christmas tree is here unexpectedly distant and photographed in even, diffuse daylight. A sense of desolation is created by the absence of people (elementary), but also by one of the artist’s favorite devices, a low-angle shot that shows an edge of ceiling and lots of naked wall. It turns the interior space into a bare cube that locks in a trapped central image. (Girl in a coat lying on her bed, N.Y.C. 1968, Transvestite at her birthday party, N.Y.C. 1969, Four people at a gallery opening, N.Y.C. 1968, The Junior Interstate Ballroom Dance Champions, Yonkers, N.Y. 1962).

Faintly skewed right angles, bare walls and a dominant compositional symmetry invariably suggest an impersonal, mechanical order, a world in which humanity is alien, or, at least, messy. It is to Arbus’s credit that she doesn’t allow herself to make a mannerism of this almost foolproof technique. Her eye is carefully attuned to finding the visually powerful elements of a banal setting—the elements that will drain off the psychic force of the portrait subjects. In Man at a parade on Fifth Avenue, N.Y.C. 1969, for instance, it is the massive trash container that gives an unexpected flimsiness to the flatly lit, raincoated man at its side who holds a black hat over his heart. In Triplets in their bedroom, N.J. 1963 it is the expanse of patterned wallpaper and bedspread that mimics the repetition of the identically dressed little girls.

The “secret” here, as with the identically dressed pairs in several other photos, is that we read the separateness of the figures as something they reject. By their dress and posture they choose to be identical, indistinguishable from one another, but their separate races betray them. Similarly, the sexually ambiguous pairs are also betrayed, for those who choose the woman’s part are always bigger or stronger-looking than their partners.

What is universal in Arbus’s vision is that we all support illusions about ourselves, and we’re all afraid the disparity shows. She threatens us all. We are afraid because we know we lie, and we think the camera never does. Arbus’s stiff-upper-lip pathos is finally based on naïve notions, the popular naïveté that supposes all “bare facts” are true and all artifices are lies. With the traditional realism of the Jewish mother, she takes our aspirations to be childish fantasies, and tries to strip us of them for our own good. If we submit, however, it is not reality that overpowers us; it is art. Her images are constructions, the result of will, choice and artifice, just as we are ourselves. Nothing is more savagely natural than the use of dress, scarification, body and facial ornament to assert the identity of the bearer. Of necessity, we are all artists, creating our intuitions out of biologically and socially given materials. If we are appalled by the Mexican dwarf who wears his derby in bed, there is finally nothing there worse than a failure of taste. Perhaps Arbus was showing us that, too.