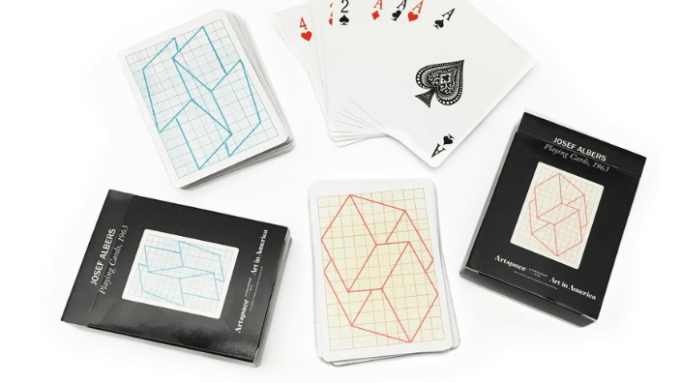 In an effort to engage wider audiences with contemporary art, in the 1960s and ’70s A.i.A. produced a series called “Art for Everyday Living,” commissioning artists to design coins, ceramics, lithographs, children’s toys, and needlepoint projects. (Last year, on the occasion of his retrospective at New York’s Whitney Museum, we recreated an edition of Frank Stella’s geometric needlepoint pillow.)

In the April 1963 issue of the magazine, A. Hyatt Mayor, then curator of prints at the Metropolitan Museum of Art, introduced designs for decks of playing cards by George Biddle, Jacob Lawrence, Richard Anuszkiewicz, and Josef Albers.

We’ve reproduced Mayor’s original article here to contextualize a collaboration between Art in America, Artspace, and the Albers Foundation to bring Albers’ proposal to life. The double decks of cards feature two designs by the artist and renowned color theorist-one blue and one red. After catching Albers’ grayscale paintings at David Zwirner Gallery through December 17, and his Bauhaus-era photocollages at the Museum of Modern Art through April 2, 2017, up your poker game with this limited edition set. Access the sale on Artspace.com. —Eds.

The ancient Chinese and the Europeans of the late Middle Ages cut woodblocks for printing both playing cards and holy images. These early printers made the best of both worlds by serving the shrine and the gambling hell, God and the Devil, the way village carters used to busy their horses the year around by hauling ice and coal. Playing cards and Sunday school saints have ever since preserved a cousinly resemblance, an air of tradition that fossilized centuries ago. Oddly enough, the Queen of Hearts has kept more fixedly to her mediaeval look than the Queen of Heaven, for the card player has proven more conservative than the priest.

Both have immobilized for practical reasons. Prayers will go out more easily toward an image that is familiar from childhood. While our saint need not look precisely like the one in our nursey, there must be a family resemblance, which still allows the image to evolve gradually over the generations. But the playing card has changed less because the player must recognize it instantly so as not to pull out a spade when he wanted a club. The need to recognize at a glance has standardized cards for five centuries, and music notes for half that time. Yet before the age of Bach, the notes of music took on many charming shapes, and alongside the rigid pageantry of the court cards there have been many imaginative variations and experiments.

In Germany over a century ago some romantic painters designed whimsical cards that were poetic spoofs of the age of chivalry, showing knights and chatelaines in moonlit gothic chambers. Each card provoked a question, started a story, dragged a red herring across the track of habit, making for more talk and congeniality around the card table than we allow today.

The designing of cards would seem to be one of the ways for a contemporary painter to rejoin the human image, if he is designing face cards, or, if he is designing the backs, to fit abstract art into the uses and awareness of daily life. In both cases the modern painter is acting like the great painters of the Middle Ages and the Renaissance when they designed triumphal arches and hat badges, altarpieces, and trays for carrying presents to a newborn baby. Because these objects are modest and often disposable, they invite an artist to a recklessness of experiment that he might not dare in more formal work. Experiments, if happy, will serve as rehearsals for great innovations. In this way the Italian Renaissance painters tried out effects of moonlight and torchlight in the humble predella long before they displayed such innovations on the high altar.

In such happier times great design ran like a bright thread through the whole weave of life, from the supreme rare works that command silence and isolation right through to the box covers and theatre tickets. Let us hope that the charming playing cards on these pages may help to lead the serious art of our time into a more living and casual intimacy with our everyday moments.