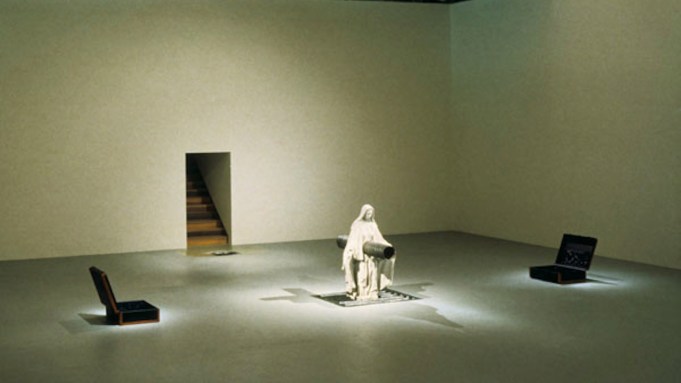 On the occasion of Robert Gober’s retrospective at New York’s Museum of Modern Art, A.i.A. delved into the archives. In our December 1997 issue, art historian David Joselit argued that Gober’s invocation of Duchamp was even more sly than often thought.

It’s startling, in 1997, to be confronted by a life-size effigy of the Virgin Mary in an installation by an openly gay artist, presented by a museum known for its commitment to progressive (and secular) art. But this is the encounter engineered by Robert Gober in his new work for the Museum of Contemporary Art in Los Angeles. The cast-concrete figure of the Virgin, pierced by a culvert pipe and standing over a large drainage grate, is the central element in a complex four-part work. On either side of the artificially weathered statue are two open suitcases—handmade by Gober and assistants from leather, wood, iron and silk—that are also fitted over drains. Behind the Virgin, on axis, is a staircase perpetually flooded with rushing water that empties into a drain in the gallery floor.

The shock of this image, whose sentimentality is both frank and arresting, put me in mind of another “lady”: that of Jean Genet’s Our Lady of the Flowers, originally published in 1943. In this novel a young and beautiful male murderer, known as “Our Lady of the Flowers,” stands for a particular type of gay erotics in which murder, betrayal and physical abjection—as well as an anality which might be called a poetics of the drain—are imagined by Genet in the most sentimental of terms and explicitly laced with references to Catholicism. And yet Genet’s inverted spirituality, which finds gay pimps, hustlers, and hoodlums sanctified for the purposeless crimes, is only distantly related to the Lady of Gober’s installation. This latter figure grows out of a subsequent moment in gay history: the age of AIDS, and the fierce melancholy which characterizes it.

Freud defined melancholia as a pathology of retentiveness, the product of an inability to work through grief. A sufferer of melancholia is unwilling or unable to let go of a person once loved but now lost. As a result, that “lost object” is internalized, incorporated within the psyche of the melancholic, who redirects inward, toward himself, his sadness and anger at being “deserted” by another.

On the one hand, Gober’s installation might seem the antithesis of such an instance of melancholic retention. After all, the Virgin’s womb is eviscerated by an empty pipe, which blasts a hole in the place where the Son would have gestated. The object of grief, the dead Son, is absent: regarding the Virgin head on, you can see through her body to the flowing water of the stairway waterfall beyond. Moreover, the open suitcases on either side of the statue—the receptacles for those possessions essential for a journey—empty into drains. In his installation, Gober suggests that both bodies and things have been let go, allowed to slip into oblivion.

And yet, visible though the three drains beneath Virgin and suitcases is a brightly lighted aqueous world of simulated tidal pools—nature’s womb. These spaces are populated with fabricated rocks, mussels and seaweed, all painstakingly constructed in the artist’s studio from urethane and cast plastics. Within each of the drainscapes the masculine body reemerges: in the profiles of presidents that appear on the enlarged coins visible through the central drain; and, in each of the flanking spaces, in a pair of wax male legs before which a pair of dangling infant’s legs appear. Gober’s installation recovers an erotic and regenerative masculine body (the babies’ legs are suggestively placed at the level of the phallus) at just the point that it has slipped, figuratively, “down the drain.” And this recovery, though hopeful, is also necessarily tinged with the retentive species of loss characteristic of melancholy.

Dave Hickey concluded of Gober’s 1992 installation at the Dia Center for the Arts that it manifested an “unshakable, primal certainty . . . that a ‘real homosexual nature’ exists, that there is latent in the world at large a whole Other construction of ‘nature’ and what is ‘natural’—an Other reality coextensive with the Euclidean hegemony of heterosexual culture but prior to it, and eternally out of phase with it.” Although Hickey’s reading is ostensibly sympathetic, this is a straight fantasy of alienated homosexuality, safely cordoned off from heterosexual culture. Its seemingly utopian notion of a separate “homosexual nature” suggests that lesbian and gay people represent a distinct species requiring its own preserve. While some might take this as a celebratory and even idealizing portrait of same-sex desire, I am reminded of far less pastoral visions of a separate but unequal coexistence, exemplified by conservative calls early in the AIDS pandemic for the quarantine of gay men infected by HIV.

Moreover, Hickey’s analysis significantly misrepresents Gober’s poetics of the drain, which is characterized by impure mixtures, where one thing slips over another. Think, for example, of the proximity of an icon of virginity—a wedding gown—and the equipment of feline elimination—kitty litter—in Gober’s 1989 installation at Paula Cooper Gallery in New York. On the wallpaper in the room containing these objects there was represented a different species of “impurity,” a mixing of race and sexuality, in the juxtaposed figures of a white man sleeping on his stomach and a lynched African-American (hanging is said to cause an erection). Gober’s project seeks not to create an “other” nature, but to denaturalize both heterosexuality and homosexuality.

Indeed, such a logic of “queering” the terms of masculinity, femininity and sexual desire goes well beyond the level of Gober’s imagery to characterize his self-conscious relationship to art history, and particularly to the legacy of Marcel Duchamp. It has often been noted that Gober’s sculpture strikingly parallels aspects of Duchamp’s oeuvre. On the one hand, his tendency to present objects which at first appear to be mass-produced would seem to be indebted to Duchamp’s readymade strategy. Initiated in 1913-15, and receiving their most public “coming out” in 1917 with Fountain, an inverted urinal submitted to and ultimately rejected from the Independents exhibition in New York, Duchamp’s readymades have been credited with the displacement of artistic and even esthetic value from the process of making to the gesture of positioning objects within the institutional networks of the art world. Not only has Gober often employed objects which seem to be readymades but his choices—plumbing fixtures such as sinks—have frequently echoed Duchamp’s own. As Hal Foster remarks in his catalogue essay for the Los Angeles installation, this new piece established an indirect reference to Duchamp’s final work, Etant donnés. Like Etant donnés, Gober’s installation deploys a diorama-like setting in which an eroticized body is partially glimpsed through a small aperture (the grill covering the drain).

As striking as these parallels might be—and even a rudimentary awareness of 20th-century art history makes Gober’s references obvious—the differences between his practice and Duchamp’s are just as significant as the similarities. Gober and his assistants laboriously fabricate all of the components in his works themselves, so that the process of making is not short-circuited in quite the way that it was in Duchamp’s art. The irony of Gober’s process is that the artisanal labor of the artist’s studio is veiled by the resemblance of the final products to industrially manufactured objects. But ultimately, I think, Gober’s invocation of Duchamp is more sly: His oblique quotations of the artist who is taken to exemplify avant-garde indifference to iconography counterbalance his own intense sentimentality. Indeed, Duchamp occasionally presented charged objects as readymades, but I find it hard to imagine him making use of a devotional statue of the Virgin Mary. Whereas Duchamp depended upon the power of institutions to confer the status of art on ordinary things, Gober takes advantage of the now canonical status of the readymade to accomplish his own ends. Just as Genet reinvented Catholic sentiment by associating it with gay outlaws, Gober is able to reinvigorate Catholic sentimentality in part by casting it in the form of a quasi-readymade statue of the Virgin.

The statue of the Virgin Mary in Gober’s installation is the element of this work that is most difficult to assimilate, and yet I don’t think that this figure is its most significant component. Through her transaction with a culvert pipe the Lady becomes a drain, and in fact it is the poetics of the anthropomorphic drain which I find most moving in this and several other of Gober’s works. Among his earliest sculptures are a number of hauntingly torsolike sinks that initiate this direction, which has continued in a variety of works up to the present. What I find arresting about the image of the drain is its paradoxical mixture of embodiment and disembodiment. The drain recalls the most visceral of bodily sites—the anus, the vagina, the mouth, the lesion—but it also suggests the status of the body as a threshold rather than an object—a membrane though which liquids and gases pass. This uneasy play of gross physicality and evanescence is certainly redolent of Catholicism, but in Gober’s work it has as much to do with the dramatic recodings of the body that have resulted from the presence of AIDS in our lives. This is why the appearance of a “paternal”—though not fully patriarchal—figure “down the drain” on either side of the Lady achieves such complex resonance. In producing an inverted world where light and life exist underground, Gober suggests that the drain is not a place to be despised and denigrated, but rather a territory to be inhabited.

First Look: The Panasonic Multishape Will Be the Biggest Men’s Grooming Product of the Year