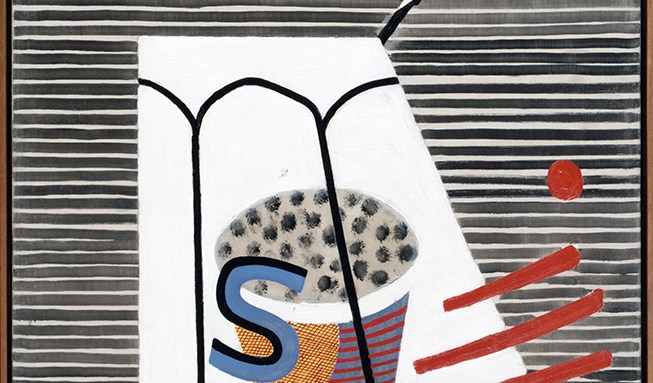 On the occasion of “Stuart Davis: In Full Swing” at the Whitney Museum in New York through Sept. 25, we’re offering a selection of Davis’s writings published in our pages in 1965, introduced by art historian Lloyd Goodrich, former director of the Whitney.

Stuart Davis was one of the first to embody the dynamism of twentieth-century America in the forms of modern art. Out of American actualities he created an artistic language that spoke in both native and international accents, yet was completely his own.

His beginnings were in the naturalism of Robert Henri, and his earliest works had a racy humor and a sense of the common life that might have made him a leader of the American scene school. But he was no cultural isolationist. As he wrote in 1930: “Why should an American artist today be expected to be oblivious to European thought when Europe is a hundred times closer to us than it ever was before?” For him the Armory Show had been “the greatest single influence I have experienced.” From naturalism he evolved to an art of American subject matter expressed in abstract or semi-abstract terms.

Davis was always his own man­–inventive, positive, with his feet planted firmly on his native asphalt. “I don’t want people to copy Matisse and Picasso,” he wrote in 1940, “although it is entirely proper to admit their influence. I don’t make paintings like theirs. I make paintings like mine.” Through constant independent thinking and experimenting he developed his own artistic idiom. “In 1927,” he later recalled, “I nailed an electric fan, a rubber glove and an eggbeater to a table and used them as my exclusive subject matter for a year.” In this “eggbeater series” of geometric abstractions, the objects served as a starting-point for intense concentration on forms, colors and lines, their positions in space, their relations to the flat plane of the canvas, and their transformation into pure design. Henceforth his art was one of “color-space composition,” as he called it. To him the painting was first and always a physical object, with a life and order of its own.

He was a deliberate, thoughtful designer. Every element of the picture was thoroughly planned. Forms were uncompromisingly definite and clear. Their pronounced angularity, their lightening movements, their strong thrusts and counterthrusts, were charged with concentrated energy. The fantastic calligraphy in which he delighted played freely around the central geometric elements. Color was at once logical and deeply sensual, employing relatively few tones but with unveiled force.

Davis’ artistic evolution was steady and consistent. He was impervious to the winds of fashion. During the 1930s, when the dominant schools were regional and social, and abstraction was virtually an underground movement, he was one of the few Americans who persisted in an advanced direction. And in the Forties and Fifties, contrary to prevailing trends, he remained a fully conscious composer. As he grew older his work became more complex, bolder, larger in scale. His paintings from the middle 1940s on reveal maximum power: uninhibited vitality of form, juxtaposition of intense colors, a controlled dynamism. In his mastery of a highly individual content and style, Stuart Davis ranks as one of the genuine creators of our time. ­–Lloyd Goodrich

My painting “Bass Rocks” was made from drawings from nature on Cape Ann, Mass. The subject consisted of rocks, sea, and a stretch of beach. Naturally it was not my purpose to reproduce the optical appearance of this scene. What I wanted to do was to make a picture that would recall my exhilaration in contemplating it. Experience has shown that even the most accurate reproduction of such a scene will not do this. What is sought is the subjective event, that is to say, what was felt and experienced at that time and place. At another time the same scene would produce very different emotions. And then that is not the whole story, because one does not merely react to a subject as such. He reacts to it in relation to the mood he brings to it, his general state of mind and interests of the time. The picture then is not a picture of a state of mind in relation to a specific place. The state of mind, as such, has no social currency until it is objectified in concrete action. In the case of the painter this concrete action consists of its definition in terms of form, or as I prefer to call it, color-space. By taking the immediate reactions to a subject matter as the field of action, and integrating them with the pre-existing emotional urges, a synthesis is created which is a realization of emotion within the limits of a defined space. In the case of “Bass Rocks,” the brilliance of light, the dynamics of the rock formations, the entirely different dynamics of the sea, etc., were transmuted into an analogous dynamics of spaces and color. In this way the pleasure which I felt at that time and place is given objective permanence, and becomes the means of evoking it again at will. It rescues that event from the coma of time, and makes it instead a living factor in present experience. That’s about as near as I can get to it.

From a letter from Stuart Davis to Elisabeth S. Navas, Trustee of the Roland P. Murdock Collection, August 16, 1944.

My painting, Owh! In San Paó, like my Amazene, and Rapt at Rappaport’s, are statements in a visual proprioceptive idiom as simple as a Tabloid headline. Anyone with enough coordination to decipher a traffic beacon, granted they accept the premise of its function, can handle their communicative potential with ease. There are no mathematics of Abstract or Naturalist Expressionistic Idealism to befuddle here, and the Department of Philosophical Displacement Relativisms is on the floor below. Emotion and Feeling, that crucial Emulsion, is a dimension at right angle to the plane of the canvas in these paintings. They appropriately offer only a modest common-sense image of a familiar object in the Shape of Color-Space Logic. Their content of Feeling occupies exactly the same place it did in the artist, that is to say, in the person facing the unfeeling canvas. Only a sadistic brute would demand simultaneous emphatic immersion in the artist’s Feelings from a spectator already completely self-emulsified in contemplation of the Cool painting.

“Hot Still-scape for Six Colors­–7th Ave. Style” is composed from shape and color elements which I have used in painting landscapes and still-lifes from nature. Invented elements are added. Hence the term “Still-scape.” It is called “Hot” because of its dynamic mood, as opposed to a serene or pastoral mood. Six colors, white, yellow, blue, orange, red, and black, were used as the materials of expression. They are used as the instruments in a musical composition might be, where the tone-color variety results from the simultaneous juxtaposition of different instrument groups. It is “7th Ave. Style” because I have had my studio on 7th Ave. for 15 years.

The subject matter of this picture is well within the everyday experience of any modern city dweller. Fruit and flowers; kitchen utensils; Fall skies; horizons; taxi-cabs; radio; art exhibitions and reproductions; fast travel; Americana; movies; electric signs; dynamics of city nights and sounds; these and a thousand more are common experience and they are the basic subject matter which my picture celebrates.

The painting is abstract in the sense that it is highly selective, and it is synthetic in that it recombines these selections of color and shape into a new unity, which never existed in Nature but is a new part of Nature. An analogy would be a chemical like sulphanilamide which is a product of abstract selection and synthetic combination, and which never existed before, but is nonetheless real and a new part of nature.

This picture gives value and formal coherence to the many beauties in the common things in our environment, and is a souvenir of pleasure felt in contemplating them.

Any painting I am working on is my favorite…I submit “The Paris Bit” as my favorite because I am working on it at the time of writing. The painting is on a canvas 46 x 60 inches and is in that state commonly known as “drawing.” I think it might be of interest to students precisely because of this fact. It is traditional to think of drawing and painting as two different things, a concept which has its own logic. However, my temperament has led me gradually through the years to regard them as an inseparable unit…I gradually learned that it is impossible to make any mark on a surface without setting up a positional and a color relationship.

I compose and develop my picture as a line drawing because it is a method most amenable to inspiration and change, in addition to its demand for positive decisions. Naturally, I do not regard this drawing process as a thing apart from or preliminary to making the painting. I consider that it is the painting at a certain stage of its maximum development, and I continue the drawing until I feel that its over-all configuration has reached a degree of complexity and completeness satisfactory to the impulse that initiated it. At this point the drawing is finished, as I have no need to change or add to it in any way.

What remains is to increase its visual impact through the use of stimulating color intervals. The essential content and meaning of the picture are not changed in this process but simply made more memorable.

As to “The Paris Bit”–what can be said about it? Like all my pictures, it had its origin in something seen–in this case a Paris street and a sketch made of it thirty years ago. I often compose paintings from old sketches, and develop them in terms of my current ideas and interest without any thought of recalling the mood in which the sketch was originally made.

Stuart Davis: “This Is My Favorite Painting” in Famous Artists Magazine, Winter 1960.