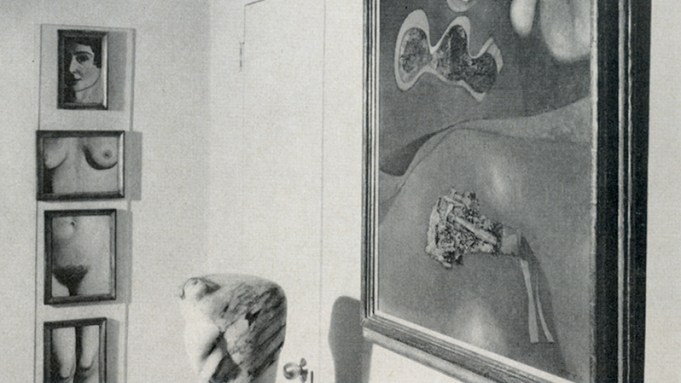 Painter William Copley believes that artists’ collections are the most interesting: “Artists collect with a precise inspirational purpose, more fetishistically but with a greater sense of unity than other men, never for status symbol or to impress others.”

“I do not understand painters who do not collect…the urge to collect art is part of the urge to create art. Creating a good collection is like making a good painting, it should have perfect unity, it should be a statement, it can extend our experience.”

William Copley, a former Californian who is now living in New York City, owns the finest collection of surrealist and dada art in the United States. It seems uniquely extensive, in our time, as a statement of one artist’s tastes. But the painter’s need to surround himself with the work of other artists is a neglected aspect of history. Dürer, Rembrandt, Rubens, Joshua Reynolds, Degas and van Gogh are only a few of the artists who were possessed with the urge to collect. And the case of van Gogh, who purchased contemporary prints at his most destitute moments, is proof that the need to collect is not confined to artists in a specific financial status. In our time, Picasso’s stock of Douanier Rousseaus, Matisses and Degas; Dubuffet’s warehouses of “art brut”; Max Ernst’s American Indian art; Alfonso Ossorio’s magnificent collection of contemporary American paintings; Leonard Baskin’s Renaissance prints and bronzes; and the fine pieces of primitive sculpture owned by Jacob Epstein, Jacques Lipchitz and Adolph Gottleib are reminders that some artists have a temperamental need to surround themselves with the work of others.

Artists may be said to collect with a greater sense of unity than other men, since their possessions fulfill a very precise inspirational purpose. The first time I visited his collection Bill Copley said to me, with a sweeping gesture which embraced the superb Mirós, Arps, Mattas, Lams, Ernsts and Picabias in his living room: “I demand to be amused.” He puffed meditatively on his pipe and added: “I have a very broad, inclusive definition of humor.” His definition seeped out through later talks. I learned first about some of the emotional ties that bind Copley so exclusively to art of magic, fantastic or irreverent character, or of surrealist derivation. Like many of the first-generation surrealist and dada artists, Copley was brought up in an authoritarian and conservative background, came to painting from literature and turned to surrealism after the spiritual turmoil of a World War. “I came from a family who believed that all artists are either Communists or homosexuals. Four years at Andover, four years at Yale, four years in the army…it all left me looking for something revolutionary.”

Although his oversaturation with authority may in part have led Copley to the irreverent and enfant terrible character of dada, it was, unexpectedly, his intensive study of James Joyce which led him to painting. He set out, after the war, to be a writer, and reading Joyce made him feel the need for greater precision in his prose. He began to paint with the sole purpose of improving his literary style. But his passion for painting grew quickly, and in 1948 he opened an art gallery in Los Angeles where he gave one-man shows to Magritte, Max Ernst, Tanguy, Matta, Man Ray and Joseph Cornell. Selling almost none of these pictures, he bought ten percent of each show, the nucleus of his present collection. He then moved to France for a fifteen-year stay, to concentrate on his painting. His collection blossomed there, and was helped by his close friendships with many surrealist artists.

Bill Copley is a short, shy, retiring man with a friendly, impish grin, a boyish shock of unruly black hair and alert, searching, melancholy grey eyes. He is a patient, generous, infinitely gentle man who is doomed to the solicitudes of affectionate cats, timid or tormented humans and children in need of a tender embrace. He is one of the most cultured and literate artists working in the United States today, and the most secretively philanthropic.

He is an obsessive worker who thrives on a rigorous schedule of isolation in a studio from nine to six. He is a fastidious gourmet, a liberal in his politics, reads avidly, has a wry, unexpectedly macabre sense of humor, loathes exercise, and has no hobbies except listening to baseball games, often on three radios at once, “…not because it’s a sport but because it’s a ritualistic madness…the laws of chance are so developed in baseball that it’s like gambling…it’s pure surrealism.”

Although he is a largely self-taught painter Copley has had fourteen one-man shows since 1953, three of them at New York’s Iolas Gallery, where he is presently showing. The paintings of this moral, quiet man are obsessively centered around dramatic pastiches of erotic situations. His personages are coy, ideogrammatic nudes, men dressed in rigid Victorian costumes, ruffled and misunderstood children, intolerant parents, squat policemen flourishing sticks, irate priests brandishing umbrellas. The setting is always a crowded Victorian interior with stock furnishings of busy wallpaper, ornate upholstery, umbrella stands, bidets and four-poster beds. A critic once wrote that Copley’s painting was involved with “symbols of respectability and sublimated sex.” “That’s me,” Copley retorted with a puckish grin.

“I demand to be amused,” he repeated. “I believe religiously in the necessity of humor in all the arts…it’s the one thing, traditionally, which painting is not supposed to have. The problem that interests me most in painting–it’s a tough problem–is to find that 50-50 balance between form and humor which many great masterpieces of literature have achieved. The surrealists are the only ones who have worked extensively with this problem in visual terms. And Max Ernst, as I see it, is the one who has best achieved the balance. Abstract and non-objective art can be humorous too. Calder, Miró and Arp, in the playfulness of their forms, achieve the essence of visual wit.”

Upon our last meeting I reminded Copley that he had yet to give me his definition of humor.

“Humor is a lack of pretensions…it is the reminder that we are mortal. Humor is based on ambivalence, on the unexpected, and its role is to ridicule the bad taste inherent in nature. It is never enough to be impressed by the beauty of anything. I love music but I refuse to go to concerts, except to see “The Tales of Hoffman,” because it bugs me to see everyone being so serious. The cornerstone of humor is sex because sex is so violently spiritual and so violently physical at the same time…sex is the most ambivalent thing we know, and love is inexpressible without humor. You laugh at a puppy dog or at the backside of a woman, not because it’s funny, but because you love it. I have no use for satire which is not based on love–that’s my objection to a lot of the pop art movement, even though it took up where surrealism left off. If I were collecting old masters I would have Hieronymus Bosch, Botticelli, Fragonard and Boucher–the latter three because they deal so well with the female body, which is the basic form of humor. And Bosch because it’s humor on its deepest, blackest, most critical, most satanic level…but based on a great love of man, on a profound realization of the injustices dealt to man.

“Duchamp, Ernst and Picabia are my favorite modern artists. They are masters of ambivalence, and my dual passion for Duchamp and for James Joyce is logical; they are the two greatest punsters of the century. Surrealism sets up poetic situations, metaphors which only the viewer can complete, and it always maintains its mystery for me.”

The painting that Copley has chosen to hang in his bedroom, facing his bed, is a somber, macabre and utterly mysterious Magritte. A diabolic Victorian personage wearing a Homburg hat stands on shore next to a faceless, prostrate Protean–a Nordic creature with a long mane of woman’s hair. This painting reminded me, more than any other piece in Bill Copley’s collection, of Baudelaire’s statement that “the comic is one of the clearest tokens of the satanic in man, one of the numerous pips in the symbolic apple.” As Copley stood in front of it, puffing contentedly on his pipe, he said: “What a great picture…I’ll never begin to understand it.”