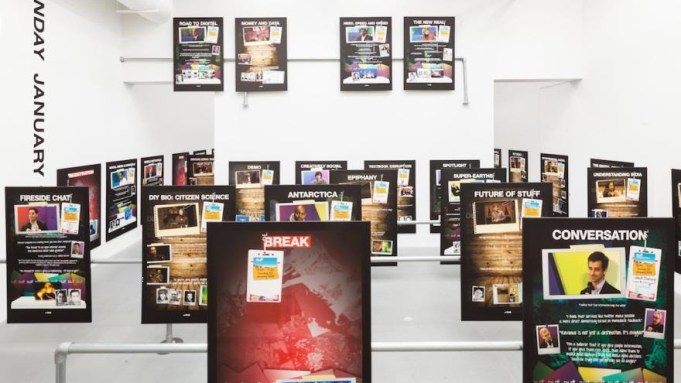 New Zealand-born, Berlin-based artist Simon Denny’s exhibition “The Innovator’s Dilemma,” on view through Sept. 7 at MoMA PS1, combines several years’ worth of projects, rethinking the retrospective form as a dense, content-packed trade show. Denny collaborated with online platform Genius.com to host a live annotation during the opening. The artist Skyped with A.i.A. from Venice, where he is representing New Zealand in the upcoming Biennale, for a conversation about Genius, embracing corporate aesthetics, and why he doesn’t have a favorite color.

KEVIN CHAMPOUX  I’m curious how you and MoMA PS1 curator Peter Eleey decided on the trade show format of “The Innovator’s Dilemma.”

SIMON DENNY  We both wanted to show a range of work, so I tried to think about practical solutions for that but also conceptual solutions. And we naturally both came to this trade show idea, which I think is something I use as a native language in my work anyhow.

CHAMPOUX  Something that can efficiently show a range of ideas.

DENNY  Exactly. We came up with the idea to display the work on platforms. Of course then it was a question of what was the best way to mirror the genre of the trade show in an art context, so that it wouldn’t be a cheesy event.

Of course there’s aspects of cheese, but you want a balance between what you’re taking from and what you want to evoke. I have an investment in the art-ness of it, let’s say. So the platforms came first as a very good solution. I think they work incredibly well to demarcate space and suggest that this could actually be a trade show environment. The icing on the cake was hanging signs that we managed to source, which really say “trade show” with no effort. From there, I wanted to focus on my past projects dealing with startup culture and corporate aesthetics and imagery.

The collaboration with Genius.com and Emily Segal [from K-HOLE] was the next important piece of the puzzle. Oftentimes when I start generating content for a show, I try to connect it to a particular space in a way that makes sense for people in the audience. And I felt Genius was a great company to work with because they’re quite visible in the New York tech world.

CHAMPOUX  And in the art scene as well.

DENNY  They have this nice situation where they’re kind of iconoclastic and challenging—I mean, it’s somewhat received wisdom that companies should be like this—and I wanted to have this kind of edge in the performance as well. The co-founder Tom [Lehman] was very up for it and so was Emily. She was one of the people who did my TEDxVaduz event [at the Kunstmuseum in Liechtenstein in 2013] so we had an existing dialogue that was cool to revisit. I wanted to fold those things together in a way that made sense.

CHAMPOUX  At the opening, I felt—surprisingly—that the crowds were actually beneficial to seeing the art, as opposed to getting in the way of it. Because the show was set up like a trade fair, the work was energized by being seen in a space filled with people

DENNY  It feels a bit like an art fair as well. There are other artists’ works in much of the show.

CHAMPOUX  In addition to Soundcloud, Genius, and K-HOLE (which floats between art and corporate culture), what are some other young startups that you feel have a particular connection to art, or are also functioning as art practices?

DENNY  This is a space I really like, and for me K-HOLE will always be the best example. I like where Emily is taking it with her move into the commercial realm, specifically working for a company like Genius [where she is the creative director]. We made a lanyard that looked at some of the feedback she was getting from within the Genius community about her rebranding exercise. I’m a fan of this history from the Artist Placement Group onwards, the John Latham or Robert Smithson vision of what artists should be. I’m also a fan of Michael Shamberg and the people who were involved in television in the ’70s in an art context, who then moved into a much, much broader space like film production. I definitely see Emily’s move into making billboards and swag, really defining the look and output of a company, as a very interesting move for art also.

CHAMPOUX  Especially with the branding of merchandise, there are higher stakes than for somebody who is designing for a gallery show.

DENNY  Higher than my stakes usually are. She has to deal with a whole community’s idea of what her brand is. That’s intense. I venture out here and there, but I stay firmly within my craft and within the art tradition. I really enjoy presenting exhibitions in museums and galleries. While I look to the tech community and participate in it to some degree, it doesn’t look like I’ll be making that shift, even though I’m a fan of that direction of art-making.

CHAMPOUX  Do you have certain attachment to the cleanness of the tech aesthetic?

DENNY  Not necessarily. I mean, I love it. It looks beautiful. I’m of the very classic conceptual tradition of using the aesthetic that suits the material. I try to use this clean thing because it works so well in the tech context. It’s clean but it’s also quick. Fabricated but also commercially available. It’s not amazing stuff. It’s quite run-of-the-mill fabrication. I think there’s a very specific space within this clean aesthetic that works very well for that material. But, for example, if I were to make an exhibition about mud . . . I would get right in there (laughs).

CHAMPOUX  I would love to see a Simon Denny show about mud.

DENNY  I’ve always been a content-makes-form person. It has to have more than the visual going on for me. Obviously the visual is my expertise and my access point. But rhetoric and deployment and contact—all these other great things that are undivorceable from the visual—that’s what makes an attractive object for me, rather than because it’s green or it’s blue. I don’t have a favorite color or a favorite shape. That’s not interesting to me. I don’t have a fundamentally phenomenological exploration or motivation. It’s more like, What are these things doing?

CHAMPOUX  There’s a need to telegraph a lot of information. There’s a lot of data and you need the most efficient route to the viewer.

CHAMPOUX  When these projects are brought together, there’s a shift in the reading of the work. For example, the work about Megaupload founder Kim Dotcom, who was arrested in New Zealand in 2012 on online piracy-related charges (The Personal Effects of Kim Dotcom, 2013) gains significance when all of the objects presented in the gallery are singularly his. One person stands in for a whole culture. But in this show, his stuff is mixed in installations with all these other different branded products, from organizations like Soundcloud or TED. Was that a deliberate attempt to insert new meaning into the work or to make it difficult to understand?

DENNY  One of the problems I face as an artist is that I like to work in a very project-based way. I’ve been making this body of work in separate venues and circumstances, but they all contribute to a central conversation. Bringing that work together as a readable oeuvre is a challenge, but it was one of the aims with the show. So while this exhibition maybe complicates a reading of Kim’s stuff as stuff in a room—less tightly framed, spatially speaking—I think, conceptually speaking, it’s nice because it shows a range of my interests in tech. You have TED, on the one hand; Samsung, which is a much bigger legacy brand, on the other—they have a relationship with each other but are not quite the same. Hopefully, I created a cohesive look around rather than just a look in one direction.

CHAMPOUX  Are there yet-untouched areas of tech that you’re dying to explore?

DENNY  There are! The end of the first dot-com bubble is an interesting moment for me. And there’s an outfit called Fucked Company which is a tech meta-firm from Web 1.0 that wanted to make commentary about companies. Commentary from within the community. But at the moment I’m just going from the airport to the library.

CHAMPOUX  You’re referring to the venues for your work at the upcoming Biennale.

DENNY  Yes, I’m in Venice right now. I’m staying at an airport hotel because one of my two venues for the New Zealand pavilion is the airport. You can only work in the airport at night, because otherwise there are too many passengers coming through. We start work at 11 P.M. But it’s amazing to work with the marketing department of the airport.

CHAMPOUX  Is it the first time you’ve worked with this kind of group?

CHAMPOUX  Are there restrictions on what you can do, given their branding of the airport?

DENNY  Well, I based my proposal on an initial conversation I had with the marketing manager at the airport. I tried to pitch him something within the language of what I felt would be attractive for the airport, what would natively make sense with their advertising. The pitch was for Clear Channel as well. They want to feature the work in an advertisement. Airline magazines want to publish something on it. This is the type of attention that I wanted to gain from the project. I really wanted to enter the organization, not only doing a kind of intervention but also working directly with them.

CHAMPOUX  It’s a more cerebral take on the outsourcing of fabrication. Their expertise is less about a physical product than about a sensibility that is impossible to have when you’re working strictly in an art context.

DENNY  That’s a great way to put it. I think our profession in the arts is distanced by nature, but getting close to things and letting those other voices in has been very helpful for me, in order to make some rather unusual content.