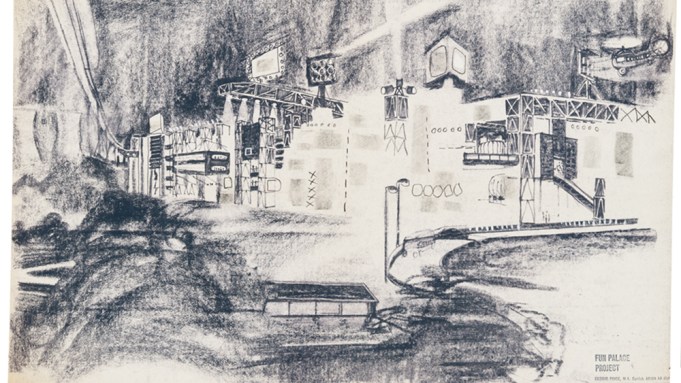 Fifty years ago, critic Ruth Langdon Inglis wrote a brief article for Art in America about an unusual architectural project designed by Cedric Price for a site in East London. In the piece, Joan Littlewood, a radical theater producer and the cocreator of the project, described her intention to build, using a mix of public and private funds, a new kind of cultural center appropriate for modern life. It would be a:

helium-balloon dream . . . where the British worker can realize his potential for self-expression by dancing, beating drums, Method-acting, tuning in on Hong Kong in closed-circuit television, action painting . . . the “First Giant Space Mobile in the World.”1

This dream, conceived in the “swinging London” of the early 1960s, was called the Fun Palace. Though the design never left the drawing board, the Fun Palace is one of the most ambitious and original manifestations of many of the ideas that defined postwar leisure architecture, and that continue to inform the design of cultural institutions in the digital age.

The Fun Palace would not be a conventional building with finite rooms and galleries, or even a “flexible” modernist open-plan space. Instead it would be what Price and Littlewood called a “cultural launching pad,” a building designed to be a constantly changing matrix wired with the latest information technology. Visitors would be invited to assemble movable, prefabricated walls, platforms, and floors, creating their own spaces for amateur theater productions, musical performances, art exhibitions, and educational courses of all kinds. Littlewood and Price wanted to create a technological playground and learning laboratory that stood in direct contrast to the traditional museum. Littlewood, again quoted by Inglis, argued that the Fun Palace would not be a place where

things are all shut up as they are in museums, nor like the present theaters where people “escape up their own assholes in the dark.” It would be a kind of “university of the streets . . . a playground for adults, built like a big shipyard with no walls.”2

Price, who had previously designed the aviary at London’s zoo and collaborated with polymath Buckminster Fuller on plans for a geodesic dome in Bath, envisioned the Fun Palace’s patrons to be working-class families who had free time on their hands, either through shorter working hours or unemployment. No mere “fun fair” or “pleasure palace,” the Fun Palace redefined leisure. It would offer not passive entertainment but active “re-creation” in a place where people could learn by exploring and developing their own creativity.3 If this mode of active leisure departed from the detached contemplation invited by museums, it also stood opposed to the mindless, packaged entertainment of commercial films and television. To Littlewood, the Fun Palace represented the ideal theater—a Brechtian environment, a Situationist device—where the audience would become integral to the action.

In addition to conceptualizing a physical structure, Price and Littlewood developed plans for open-ended programming to take advantage of the Fun Palace’s innovative features. They synthesized influential ideas about how architecture could leverage advances in science and technology to encourage social participation, personal initiative, and playful improvisation.

The ultimate goal was to foster a more democratic culture. Price and Littlewood’s description of the Fun Palace as a “cultural launching pad” might refer to the building as a venue through which people could experience culture for the first time. To be sure, theaters, performance spaces, and art studios were part of the Fun Palace plans. Yet, a more significant interpretation of “cultural launching pad” would cast the Fun Palace as an incubator space, a site for the development of new modes of cultural expression. It is not the users who would be “launched” into culture; culture itself would be produced at the Fun Palace, a vast yet anti-monumental project that celebrated the common person.

In this sense, the Fun Palace shares themes evident in a broad range of postwar British cultural expressions that responded to the social transformations heralded by welfare state reforms. A new appreciation for British vernacular culture in the 1960s is evident in music, theater, film, and even the populist ethnographies of contemporary British sociologists such as Stuart Hall. Price and Littlewood’s work fits within an overarching cultural phenomenon characterized by a reversal of the high-culture master narratives of modernism in favor of an emerging popular culture model grounded in the ordinary, the everyday.

Fittingly, the Fun Palace was designed to accommodate crowds. Price’s drawings and plans depict fourteen parallel rows of service towers, sixty feet apart, forming two side “aisles” flanking a 120-foot-wide central bay. Despite its hulking size and industrial appearance—the service towers resemble scaffolding structures—the Fun Palace was not meant to last. Price and Littlewood saw impermanence and informality at the heart of their project, which they described for A.i.A. as a “short-term experimental toy with built-in expendability—a total life-span of no longer than ten years.” Flexibility, change, and growth were prized over monumentality and durability.4 The building’s appearance could change radically from day to day, a departure from modernist architectural practice, which sought to define built environments a priori, on the basis of formal or theoretical models of idealized social space.

To activate the Fun Palace, Price and Littlewood assembled a task force, recruiting volunteers from such diverse disciplines as architecture, theater, art, philosophy, sociology, psychology, politics, cybernetics, engineering, and information technology. Task force members included Fuller, critic and historian Reyner Banham, violinist Yehudi Menuhin, cybernetic theorist Gordon Pask, Labour MPs Tony Benn, Ian Mikardo, and Tom Driberg, and other British luminaries of the 1950s and ’60s. The Ideas Group, a task force subcommittee, developed a list of seventy multimedia scenarios—arrangements of physical walls and audiovisual equipment—with provocative names like “the tactful tango-teacher,” “the palace of illusions,” “the maze of silence,” “the fantasy generator,” and “the cybernetic cinema.” The last scenario would allow the audience to decide the outcome of a film.5 In all of these proposed modes, images and information would flow through the building, facilitated by first-generation IBM 360 Model 30 computers.

The project’s planners deliberately avoided making specific recommendations about what exactly would occur in the Fun Palace. Instead, the goal was to allow users to collectively define the space. The Cybernetics Subcommittee, headed by Pask, was charged with optimizing the building’s function by designing computer systems that could register and respond to user feedback. Pask envisioned a system that would collect data about the building’s daily use and make recommendations for future uses based on these patterns. Much maligned in recent years for its association with Orwellian social control, cybernetics, in Pask’s view, could foster a democratized culture. Technology would allow the Fun Palace to be self-regulated, responsive to users rather than a central, top-down authority, such as a curatorial department or a teaching staff. This shift in authority would be possible so long as users consented to have their actions tracked by Pask’s cybernetic network.

Another prescient use of computers within the Fun Palace proposal was artist Roy Ascott’s “Pillar of Information,” a refinement of his earlier proposal for a “Juke Box” information system.6 Ascott’s Pillar of Information would be a kind of electronic kiosk that could display data of all sorts, based on the model of the Encyclopedia Britannica. His system was among the earliest proposals for public access to computers to store and retrieve information from a database. In addition, it would keep a memory of previous inquiries. As one person took information from the Pillar, a trace would be recorded of the transaction, and subsequent users would be able to track the patterns of use, with the system suggesting multiple knowledge pathways. Ascott envisioned that this would give users insight into the interests and queries of other Fun Palace users. The Pillar of Information would gradually develop an extensive network of cognitive associations, a nonhierarchical information map that would provoke further exploration beyond the user’s initial query.7 The network of information Ascott proposed was arguably one of the first visions of a worldwide web created by multiple interlinked computers and databases, some fifty years avant la lettre.

While the Fun Palace was not a school, it did promote learning—and it specifically valorized the act of learning how to learn. The Fun Palace may be considered part of a broader overturning of cultural hierarchies, but its incorporation of sophisticated technology also suggests the degree to which it could be used for economic development. This was especially significant given the unforeseeable future of British employment, which by 1966 was already faltering. The indeterminacy of the building in some ways mirrored and responded to the uncertainty and malaise evident in the UK’s economic outlook. It could not be known what skills the worker of the future might need, but it was clear that the existing training and skill sets—which catered to heavy industries—were increasingly obsolete. The workers who spent their leisure time at the changeable, evolving, unpredictable Fun Palace would be prepared for a future workplace that demanded flexibility and improvisation.

Far from being fantasy “paper architecture,” the Fun Palace project was very real, and the complex would have been built were it not for the shortsightedness of local building officials, who were unable to classify the structure according to conventional functions, such as education, theater, or sports. (The site on which the Fun Palace was to have been built is where Zaha Hadid’s Aquatics Centre was constructed for the 2012 London Olympics.) After a decade of trying unsuccessfully to realize the project, Price (who died in 2003) and Littlewood (who died in 2002) declared it officially “obsolete.” Still, architects today can learn much from this remarkable, unrealized project described in Art in America half a century ago.

The project was highly influential among avant-garde architects of the 1960s and 1970s, and the Fun Palace is a key precursor to the dynamic cities imagined by British collective Archigram. Arguably, the Fun Palace provided a prototype for the high-tech (though faux-populist) architecture of Renzo Piano and Richard Rogers’s 1977 Centre Pompidou in Paris. There, all the infrastructure is exposed. According to Piano and Rogers this is because the mechanical systems are susceptible to failure and obsolescence; therefore, they ought to be accessible and interchangeable. The Centre Pompidou’s exoskeletal structure, which resembles the form of the Fun Palace, frees up maximum interior space. Uninterrupted interiors are made possible with massive steel trusses. Ultimately, though, the Centre Pompidou transforms the simple expediency of the Fun Palace into a formal exercise in high-tech aesthetics. Despite the similarities between the two structures, the Centre Pompidou shares none of the indeterminacy and user interaction that characterized the Fun Palace. If a visitor tried to rearrange the walls in the Centre Pompidou, he would quickly be escorted out by the gendarmes.

It would be hard to envision how the Fun Palace approach could be adapted to traditional museums as repositories of priceless works. The museum itself would have to be reconceived as a site of production and reproduction (rather than a hierarchical mechanism for transmitting knowledge and storing masterpieces). However, the recent introduction of virtual reality, 3D-printing, and technologies that allow access to high-resolution images on open networks could move museum institutions in the direction that Price and Littlewood imagined. The most basic lesson of the Fun Palace is that architecture should enhance, not inhibit, growth, change, and human agency. Certainly this is not a solution for every museum, but it does point the way toward a productive use of indeterminacy. The Fun Palace project exists today as a provocation to expand the possibilities of how people can interact with architecture, without architecture arbitrarily limiting that interaction.