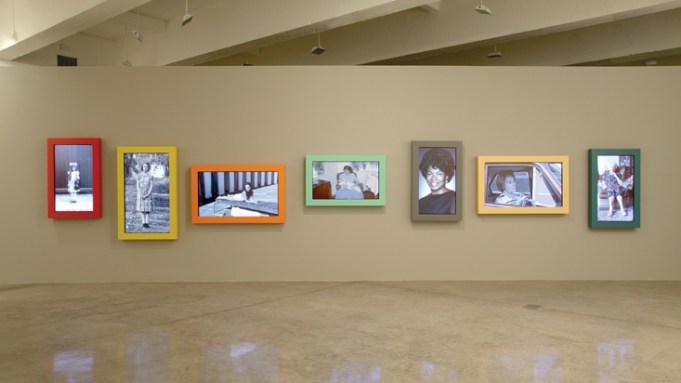 An ambitious exhibition that opened Friday night in Harris Lieberman’s cavernous temporary space at 508 W. 26th Street in Chelsea is titled, in a pointedly innocuous way, “A Painting Show.” Works by 35 artists hang cheek by jowl, and though nothing but word of mouth and a checklist will tell you, all of them are women.

Too bad the paintings are hung so close together, which is a problem for some of the bigger works that require breathing space. It makes obvious the morphological coincidences, rather than thoughtfully spun resonances. Unbroken and undivided, the giant room is singularly inauspicious for achieving the contemplative mood that the medium invites, at its best. (Thank goodness, therefore, for two spatially defiant works: Apfelbaum’s floor piece and Nelson’s freestanding canvas that allows both sides to carry equal weight.)

Still, it’s well worth going to see one excellent painting after another, and another, and another. I am among those who believe the greatest painters working today, at least in the U.S., are women. I’m not sure why that is, or even whether it merits articulating further. But I don’t understand why we can’t say it directly. The exhibition is on view through June 4.

At Metro Pictures, Louise Lawler has mounted, through June 11, “Fitting at Metro Pictures,” in which photographs from the past few years are distorted to fit the dimensions of the walls on which they are mounted, having been printed on adhesive vinyl.

The images were shot in galleries, auction houses and private homes all over and show iconic images by mostly male artists, although as at Harris Lieberman, gender is not entirely the point. LeWitt’s scribbles, Stella’s triangles, Richter’s skull, even the tutu on Degas’s little dancer—all slightly bend or stretch, and through those actions are personalized. It is a form of appropriation both cerebral and quirky. Lucky for those who went to the gallery on Sunday, Lawler’s 1981 Birdcalls screeched the names of some of those artists, and others as well, both inside the gallery and out, on the hour every hour. Audio or visual, early or recent, these wry, twisted homages show an unexpected continuity in Lawler’s practice.

At Tanya Bonakdar, Gillian Wearing stages something of a selective mini-retrospective, showing major works produced since her last solo in New York, back in 2003. Her feature-length film Self Made (2010), which premiered in Britain this fall and opened MoMA’s International Festival of Non-Fiction Film and Media in February, forms the basis for the main installation downstairs—a film called Bully, in which “James,” once subjected to taunts and threats, pursues catharsis in a method reenactment with his actual tormenters and witnessing bystanders.

Along one wall in the gallery is Snapshot (2005), a piece consisting of seven large “photographs,” which are actually videos of actors costumed and cast as girls and women from ordinary vintage snapshots, moving ever so slightly, or speaking softly. The youngest girl plays a violin. They could be people from your own family albums, unnervingly resurrected.

For a more extreme experience, however, spend a generous chunk of time upstairs with the devastating (though occasionally perversely funny) Secrets and Lies, which premiered at the Rodin Museum in Paris in 2009. In this series of high definition videos, which you watch inside a “confession booth” of narrow confines, you confront a series of people, projected at your scale and eye level, revealing major, actual secrets. But for a mouth hole and eyes cut into masks, the speakers are entirely concealed—and they need to be, for their secrets are truly outrageous. You become fixated on the moving mouths and eyes, which manage to convey a harrowing shame.

From her earliest days, Wearing has had a knack for getting people to tell her the most private things. And she makes you aware of your own latent prurience—and empathy—in a way that reality TV never could. I for one am ready to buy a ticket way ahead of time to Wearing’s 2012 retrospective at the Whitechapel Gallery in London. Too long absent from New York, her work looks incredibly surprising and fresh. The show is on view through June 24.

The Thrilling Rise of Ben Aldridge