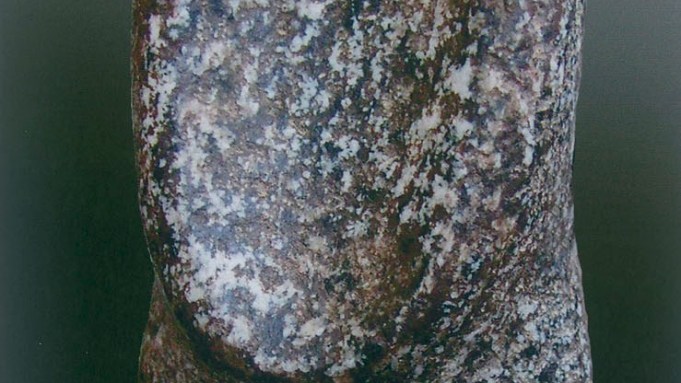 When institutions invite artists to curate an exhibition from their collections, they’re hoping to shake things up, and get a view of their holdings not bound by the typical divisions of discipline, period or medium that might restrict a more conventionally minded curator. One classic of the genre is Fred Wilson’s show “Mining the Museum” at the Maryland Historical Society (1992–93), which used the society’s collection to comment on the ways museums can omit the experience of racial minorities.

They also got a cliffhanger. Emily Rauh Pulitzer was stalling for time at a press preview last Thursday, while staff finished installing the show even as reporters filed in to the lobby. “Curators are much more well behaved, and everything gets done on time,” she said. “But artists are always trying to make things better.”

Sibony is known for poetic, spare sculptures and installations, which often incorporate discarded materials such as carpet remnants or thrift-store finds into exquisitely harmonized assemblages. The works are fastidiously crafted, and not without humor; a 2008 sculpture in wood and colored light bears the title Its Origins Justify its Oranges.

When A.i.A. asked him about the exhibition’s title, assuming there was a literary source, Sibony hesitated. “The source? The amazing . . . mind . . . word . . . jumbling . . . process,” he said, breaking into a high-pitched laugh.

The show brings together 44 works that indicate the diversity of the Pulitzers’ collection: from a tiny Peruvian funerary plaque (ca. 1100–1400) to a 1916–17 Picasso canvas; from a Neolithic South Asian fertility figure to a 1957 Philip Guston abstract oil painting. In many cases, Sibony has provocatively juxtaposed Western and non-Western, ancient and modern. By placing a Peruvian cotton mantle marked by white horizontal lines on a black ground next to Guston’s Room 112 (1957), for example, Sibony suggests new ways to see both works.

The artist describes the show as mapping out a journey. In the small, low-ceilinged lobby gallery hang nine portraits that together, for Sibony, represent society and the outside world. Close to one another are two portraits of Joseph Pulitzer: a luminous Sargent canvas from 1905 and a Rodin bronze bust from 1907. There’s also a Beckmann drawing of Louise Pulitzer (1949) and a Paul-César Helleu etching and drypoint of Kate Davis Pulitzer (ca. 1905), making this gallery into something of a family reunion.

Picasso’s The Fireplace (1916–17), a roughly 5-by-2-foot canvas depicting a hearth, marks a transition to a domestic space in the main gallery. Nearby hangs Roy Lichtenstein’s Curtains (1962), an oil and magna on canvas work showing frilly curtains over a window, and Pierre Bonnard’s Still Life with Ham (1940), which, Sibony said at a press preview, “offers a way of looking at the world without the part of the brain that separates things.”

“In the Still Epiphany” marks the 10th anniversary of the founding of the Pulitzer Foundation and bookends an inaugural show of the same collection curated by Ms. Pulitzer. The seed for the current exhibition was planted in 2008, when Pulitzer saw a show of Sibony’s work at New York’s Greene Naftali Gallery. Coincidentally, the artist was already scheduled for a show the following year, curated by Anthony Huberman at the Contemporary Art Museum, St. Louis, which is next door to the Pulitzer.

“They’ve done a lot of things here,” Huberman told A.i.A. on seeing Sibony’s installation. “But I’ve never seen it look like this before.”

The spacious main gallery was home to a remarkably spare installation; Sibony was partly inspired by the Foundation’s Tadao Ando building, which makes extensive use of natural light. “Areas of color, intensity and area of brightness of the light shift constantly,” he said during the preview. “As you watch a sunbeam move through the space, you get the feeling that we’re riding the Earth. And it’s quite a fantastic feeling.”

Counted in a certain way, the main gallery housed just seven objects. The caveat is because of an unconventional display of nine pieces within a wood-and-Plexiglas display case designed by Sibony. In it, small white wooden boxes and shelves house small items and are stacked to form a sort of totem.

In the piece, Alberto Giacometti’s Tête qui regarde (1930), a narrow white marble sculpture about 16 inches high, is topped by a Colombian headdress (ca. 1000–1500) made of sheet copper. Dangling below the head is a fist-sized iron sculpture in a shape that resembles accordion folds. It’s a piece of currency from Gabon (ca. 1800-1900), suspended just where a heart might be. The ironic placement, suggesting a purely mercenary heart, owes to serendipity, Sibony told A.i.A., “because when I got images of the works from the collection, I immediately cut away the identifying text.”

Below that hang two ceramic seed jars, both North American (ca. 700–1700 and ca. 800–1700), approximately in the place of a figure’s testes or ovaries. Other attributes are formed by Chinese stoneware vessels (ca. 550-618) and various ancient North American stone implements.

The show’s other boldest stroke comes in the Cube Gallery, a perfectly cube-shaped space at the rear of the museum, in which Lucio Fontana’s Black Landscape (Concetto Spaziale Nero), 1966, an all-black painting about 4 feet square, forms a backdrop for two ancient fertility figures, a female and male, one a terra-cotta from Pakistan (ca. 3000–2500 BCE) and the other in pecked stone, from the Azawagh Valley of Niger (ca. 5050–2550 BCE).

Fontana’s piece is one of the teatrini or “little theaters” that are among his final works. In it, a shallow space is created by a recessed surface enclosed by black lacquered wings resembling a frame. Sibony fashioned metal armatures that bolt into the wall beneath it and cradle the figures several feet in front of the painting. They hang just a few inches inside a giant Plexiglas case that houses the entire assembly and is adorned with black fabric drapery, recalling the set for a puppet show. It’s a stunning installation.

For Sibony, the combination of works is intended to bring out the works’ spiritual qualities. “Everything that Fontana wrote,” Sibony told A.i.A., “seemed to me to be what the people who made those fertility figures would have said about them.” Like what? “Like the way he praised the mystery of the universe.”

Sibony also admitted to being perversely excited about his cheeky installations. “I was just in my studio, giggling. That’s how I know something is good — when I think ‘No way—you’re going to do that?!’ That’s the ‘good idea’ feeling.”