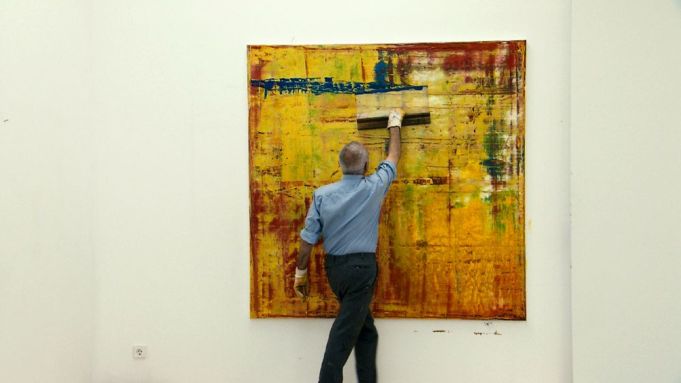 “It’s pointless to talk about painting,” says Gerhard Richter, partway through Gerhard Richter Painting, a poignant new documentary. Cologne-based filmmaker Corinna Belz’s feature-length portrait of one of the world’s most celebrated and best-selling artists more or less argues that point. Grounded in the studio, her documentary delves into Richter’s process, from the first easy sweeps with the brush, to the slow, heavy dragging of the squeegee. The camera also captures the moments between these artistic gestures, illuminating the artist’s persistent questioning.

Richter’s life story and philosophies are but footnotes as he prepares a series of abstract works and plans a traveling retrospective. Despite brief appearances by his New York dealer Marian Goodman and art historian Benjamin Buchloh, who helps articulate the tensions of creation and erasure in Richter’s work, this is no typical talking heads documentary. Instead, it’s a film in which elements such as the physicality of paint and the anxiety of the artist come across with surprising immediacy. The film’s release dovetails with the artist’s 80th birthday and a traveling retrospective which originated last year at the Tate Modern and is currently on view at Berlin’s Neue Nationalgalerie.

Belz talked to A.i.A about Richter and about filming him with unprecedented access. Gerhard Richter Painting opens this week at Manhattan’s Film Forum.

DARRELL HARTMAN You first did a short documentary called Gerhard Richter’s Window. Is that how you ended up working with him on this one?

CORINNA BELZ When that first film was finished, I just asked him, ‘Why don’t we go on?’ I think it was in his mind before, that someone might do it. There had been queries. He was a little bit afraid, but because we knew each other he was open to it.

HARTMAN I’m not surprised he’d been approached. What’s his attitude toward fame?

BELZ Sometimes it bothers him, because it’s hard to work and to be for himself and alone. But he also appreciates it. In Berlin at the press conference he said it’s much harder to have no one care about what you’re doing.

HARTMAN His use of the squeegee is such a major part of his working process. And it’s so dramatic. So much suspense as he drags it across the canvas. Going into the film, did you know this one element would be so central?

BELZ Not at all. For the first [documentary] I only filmed in the studio once. I didn’t know that the squeegee was so important or so demanding. He always works alone. In fact, nobody really knows this process-even those who have written about his work. But then during filming I suddenly understood. There’s the scene where there’s this yellow and red painting and he puts this blue paint on the squeegee. I thought, “Oh my god, what is he doing? He will ruin the whole painting!”

HARTMAN Did you get the sense that he’s leaving a lot of it up to chance?

BELZ He has so much experience. But I think sometimes he doesn’t know at all what will happen, and he wants to be surprised by the process itself. He wants this unpredictable painting.  So there’s a very high tension in this working process. For me it was sometimes like a curtain you can move.

HARTMAN Right-a curtain the artist can choose to look behind or not.

BELZ I asked him, “Do you know what’s underneath the squeegee?” He said, “Maybe I have a vague idea, but I don’t know exactly.” In the title sequence, the first time he touches the canvas with the squeegee you see a very interesting pattern and everybody thinks it’s great. The colors are pushing through the gray-and then he removed it without looking at it. He’s not looking for the most attractive situation in the painting. That’s why I liked this opening. It said a lot about him.

HARTMAN He’ll make a beautiful painting, but you’re never sure he won’t paint over it.

BELZ It’s a process of building up a situation and then destroying it. It’s also a very emotional thing. There’s the scene where he puts three blue marks with the little squeegee. This is where the destruction begins. Before there was a balance, and here he’s destroying this balance. In general for artists, this moment of aggression and destruction is very important. Do artists who work with language or photography have this impulse of destruction? It’s hard to say.

HARTMAN You also follow Richter to some big openings in the film. What interested you about those scenes?

BELZ I think about how great it would be if I could see a the opening of a Courbet exhibition in the 19th century—how people were dressed, how speeches were held. Maybe we won’t have exhibitions anymore in 20 or 30 years. I read an interview with Sotheby’s Tobias Meyer and he was saying how people in Russia and Asia are buying art just because they’ve seen a video. It’s so crazy.

HARTMAN What struck you about the way Richter approaches an exhibition?

BELZ He likes preparing exhibitions because it reminds him of what he has done. The 1960s, ‘70s, ‘80s-it’s an enormous body of work. There are more than 3,000 paintings. This great retrospective—which was at the Tate, and is now in Berlin, and will go to Paris in June—was very intense for him.

HARTMAN He says in the film, “You have to distrust your parents.”

BELZ I like the way he puts it, because it’s very straight and provocative. But I think that’s the thing every generation has to do. Some people get older and forget about that, and idolize their parents again, but he never lost that kind of questioning.

HARTMAN You use archival footage of Richter pretty sparingly. What was interesting to you about these scenes?

BELZ You see that as a young man, he was shy, but at the same time, very self-assured. And then there are key words, for him today and for art in general, like when he says that art is not just an aesthetic problem, or talks about what the color gray means to him.

HARTMAN I got the impression that he might not talk that way anymore.

BELZ No, he wouldn’t say that. It’s funny, because in that first archival scene, you see that he prepared himself. He said, “Okay, there’s this camera crew coming and I want to say something.” But I think he gave it up. He hates sit-down interviews because he doesn’t want to explain his work. He thinks that’s the curator’s job.

HARTMAN You also see that he really gives his paintings time. He waits to see if a work-in-progress is still interesting after a few hours. I imagine that’s something he didn’t do as much of as a younger artist.

BELZ That’s absolutely true, because in the ’60s, when he did these photo-realistic paintings, he worked much faster. While we were filming, he took two weeks off for vacation and then came back. I knew he’d see these yellow paintings again and that it might be important-and that’s exactly the way it was, because he says the impression he’d had before he left for vacation is fading. When he does a big abstract he is really in this process of looking, and then the painting speaks to him. He needs time to do the intellectual follow-up.

HARTMAN At one point Richter stops and says he doesn’t think he can go on with the filming in his studio. But then, clearly, he does. But you see him having that same moment of doubt that he has with his own work.

BELZ I think that’s in his nature. It’s exactly the way he communicates with the paintings. I realized during filming that I would have to get involved in that same process—to withstand this kind of skepticism. He was having these problems with the yellow paintings, and suddenly I was in the line of fire.

HARTMAN He says something about how you’d be better off filming Philip Glass. What did he mean?

BELZ He’d started to watch DVDs of composers—maybe in order to get an idea what I was going for, because there was no written proposal. I watched these films too, and then we talked about them. This Philip Glass portrait was more of a conventional TV portrait: walking and talking. So that was a joke between him and me.

HARTMAN Had he participated in films like that before?

BELZ There’s a film from 1992 in Germany that’s more this style. There was a music score. For me it was like playing-painting. The viewer has an impression, and that’s it.  I really wanted to understand from the first stroke. I always said, ‘We have to do something else. We have to film the creative process.’

HARTMAN The artist can be a bit of a performing monkey in those conventional profiles—even if he really enjoys it. I think of that one Henri-Georges Clouzot made of Picasso in the ‘50s.

BELZ It’s not in his studio. It’s a film studio. The director says, “Can you do that for a minute? I have twenty meters of film.” I tried to avoid that.

HARTMAN Richter does say that he behaves differently on camera—that he walks differently. Did you ever worry that you weren’t getting the real him?

BELZ I used to work in continuity in feature films, so I know that walking differently is one of the hardest things to do for an actor. In a documentary you may change the way you walk for five minutes, but then you go back. I think he was afraid because he’s so self-critical. It’s important to mention that there were no second takes. I never asked him to say or do things twice. But I knew it wasn’t a fly on the wall—it was more of an encounter. And maybe this sometimes made it harder for him to work. But at the same time, I think the challenge of working on camera attracted him to it, creating new rules and new situations and then making it look easy and graceful. Like Nietzsche said, “Dancing in chains.”