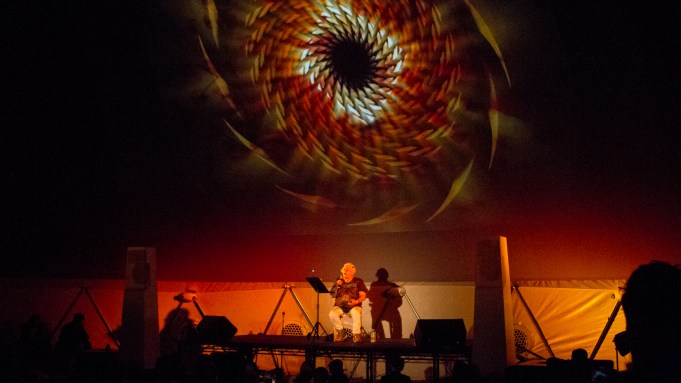 “I look at this audience, and I don’t see free people. I see intelligent people, but free?” Jazmin Venus Soto, known as DJ Venus X, peppered her panel—the close and highlight of the first day of “Between 0 and 1: Remixing Gender, Technology and Music,” a Sunday Sessions series at MoMA PS1’s VW Dome last month—with light insults like this. “Some of us are really free naturally. What’s freedom? It’s vibrancy. Experimentation. It might just mean sleeping with someone new, who you might have never considered, something I practice constantly now.” To her left sat Honey Dijon, the legendary DJ and fashion plate, calm and restrained. To her right, Bill Coleman, a DJ, writer, and manager of artists, sat quietly, waiting for a moment to get a word in.

Venus X summarized recurring themes of the day: that the expressive freedom that flourishes outside institutions is difficult to recreate within them, and that “free people,” having to come to terms with their gender identity, present it boldly, and for good reason. For members of marginalized groups, existence in a xenophobic society is a battle. To make a style from this struggle is a radical act. And sustaining non-binary identities involves creating spaces where the presentation of difference can thrive, if only for a few hours.

The three afternoons of performances for “Between 0 and 1” attempted to convey the energy and sound of those spaces, featuring appearances by icons like Genesis Breyer P-Orridge and Terre Thaemlitz (DJ Sprinkles) and younger stars, like Elysia Crampton and Juliana Huxtable. The series, organized by PS1’s curatorial team in collaboration with Bill Kouligas of the Berlin-based music label PAN, was an ambitious gambit at elucidating the relationship between electronic music and gender fluidity. The hokey conceit of the title might have been better phrased as “outside 0 and 1,” since “between” suggests that gender identity is coded along a spectrum from nothing to “one,” or fullness, rather than something that exists beyond a binary system.

Dijon delivered the keynote on the first Sunday. Impossibly sleek, tall, beautiful, she narrated her rise from a loving middle class family on the south side of Chicago, sneaking into the city’s underground house clubs at a young age, to then moving to New York, on to international acclaim.

Dijon’s narration centered the importance of her visibility, positioning the idea of a life of beauty and glamour in art, music, and fashion as an important escape from other possible ends for a trans woman, which she named explicitly: prostitution and death. When she was coming up, she did not see other trans people out in the open. Models for emulation were simply not there.

But the translation of Dijon’s work to the Dome’s sterile environment felt like an injustice. The audience strained to hear the YouTube clip she shared during her talk, a video of her lighting up Club Shelter with a pure, focused intensity. We really had to see her DJ to understand her impact. I wondered if the organizers should have put together a club event later that night so Dijon’s sound could have been experienced in its full, soulful vitality. While the club may not be the best place to reflect on history, Dijon suggested that there is always a way to frame the importance of one’s relationship to the social and political issues of the outside world on the dance floor.

The second Sunday introduced Cantos I through IV of Soulnessness, a thirty-two-hour-long album by Terre Thaemlitz. Performing as K-S.H.E and DJ Sprinkles, Thaemlitz has developed a practice over the last two decades that pairs a rejection of religiosity with a critical assessment of the commodification of gender fluidity. The Cantos focused the audience’s attention through poetic video-essays on Thaemlitz’s complicated reckoning with Catholicism and childhood.

The conversation that followed between Thaemlitz, Dijon, and Juliana Huxtable was electric. The differences between Thaemlitz’s prickly, cerebral style and Dijon’s created a delicious friction. Thaemlitz launched into a critique of transgender culture’s co-optation of heteronormative culture, such as organizing under houses, with den “mothers” as counselors, rooted in “classic queer migration stories” about journeying from the country to the city in search of a new family. Why embrace social systems “that have consistently rejected us,” he asked. Dijon pushed back, pointing out that these environments provide safety and affirmation for queer people of color, a place to feel loved, to feel special. She noted that churches are the only other place for black people to “feel powerful, to have a sense of fucking humanity.” Thaemlitz demurred, admitting to feeling more alienated than embraced by clubs.

Huxtable asked whether music itself can be attached to a sexual identity, just as music has been racialized (think of “a gay type of music,” she said). Dijon said she understands house not as a genre, but as a site: its connection to gender came from its context. “House music was too black, too queer, too gay,” Honey said. “We said, fuck you, we’re going to create something that is our own, and make a worldwide movement.” The audience cheered, just as it did when Honey made much the same comment on day one; the sentiment absolutely bore repeating.

Day three opened with Dreamcrusher, whose blistering, caustic noisescapes might have been better received in a grimy basement than on the carpet of the Dome. The crowd seemed apathetic and listless, but it was 3 p.m., after all. Dreamcrusher persevered; they tore their T-shirt off and violently wrapped their torso in black masking tape. A mild mosh pit emerged, with three and then four large men hurling themselves at one another; smaller attendees, mostly women, looked nervous, and edged quickly to the outer periphery, watching the activity from the wine table. One man thrashed and jerked on the floor as well-dressed audience members looked down at him impassively. The door cracked occasionally to shatter the dark and smoky interior with some unforgiving daylight.

As often happens at Sunday Sessions, experimental events lose steam in the Dome, as the ceiling’s geodesic pattern bends and distorts video, the sound system is too low for blistering noise music, and the audience often feels disconnected and distant from the action.

What is lost in trying to convey the fundamental outside-ness of club culture, at least before house music was ruthlessly commercialized, in a space so far from the club? The golden days can be reconstructed, though never replicated, with good storytelling, which Dijon and Thaemlitz provided in spades. But bringing experiences meant for the club—“the one place people go to get away from the bullshit,” as Dijon put it—to a venue like PS1, seemed to cheapen them by making them a trendy institutional accessory.

Genesis Breyer P-Orridge closed the series with a lecture about deciding to become pandrogynous through the Pandrogeny Project with Lady Jaye. Formerly of Throbbing Gristle and Psychic TV, in the mid-‘90s P-Orridge began to move away from industrial music into more experimental music and performance. The shift in the couple’s output accompanied a series of cosmetic surgeries they got to look more like one another, from facial reconstruction to implants. (The saga was captured in the 2011 documentary, The Ballad of Genesis and Lady Jaye.) Much as Thaemlitz and Dijon tackled the ills of binary thinking, Genesis went in on the curse of heteronormativity, the interdependent hierarchies of god, country, and clan, and husband, father, and king, which generate so much cosmic suffering. Memories of P-Orridge’s childhood in Manchester also figured largely in the talk: moments of metamorphosis, not just of the body but of thought and perception. Throughout the series and its performances, change appeared as a spiritual experience, the queer body as an ancient and once-protected one, a “different body” that is, in fact, epigenetically familiar.

Ultimately, everyone could take a powerful lesson from these talks. Creative change goes hand in hand with the relentless, fearless discovery of one’s gender and one’s sexuality which, despite all the claims of identity politics-deniers, remain one’s true possession. In claiming our identity, we are remade in it, received by ourselves, again.