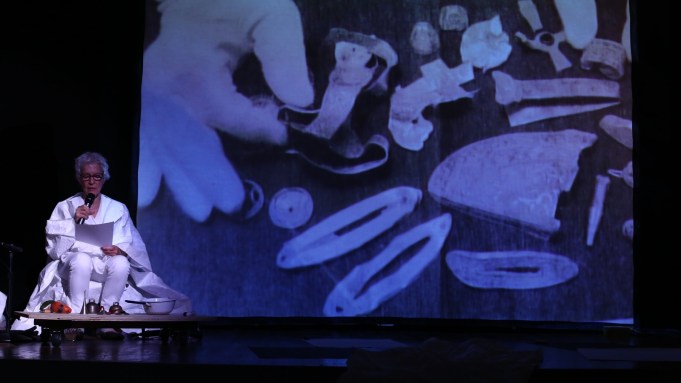 Of all of the creatures, from fish to toothy goats, channeled by Joan Jonas in Reanimation, her latest work in collaboration with musician Jason Moran, the artist herself surely most resembles the Snow Bunting. “Such a bird is about the weight of a postage stamp,” the Icelandic author Halldór Laxness wrote in his 1968 novel Under the Glacier. “Yet he does not blow away when he stands in the open in a tempest.”

In a performance presented Nov. 15-16 at the Brooklyn nonprofit Roulette as part of Performa 13, Jonas, dressed in a spritelike Tyvek outfit, conjured the Snow Bunting as she traced lightning storms with chalk, camouflaged herself within video projections of wintry scenes, and, thrashing a sheet of paper, answered the sound of the wind.

Laxness’s tale of a young emissary sent by the Bishop of Iceland to investigate paranormal activity surrounding a glacier was Jonas’s inspiration for Reanimation, which was first presented as a performance in 2010 at MIT, where Jonas is professor emerita, and later included in Documenta 13 (2012) as an installation. The 77-year-old Jonas looked tiny as she traversed the stage, which was equipped with a large projection screen, a drawing board and a workbench with a camera suspended over it, so that the actions of her hands could be projected via live feed onto the central screen, often creating ghostly superimposition effects.

Yet she commanded the media-rich scene with unflappable, quirky grace—recalling her role as an “electronic sorceress” in Organic Honey’s Visual Telepathy (1972), another work that integrated video projection with live performance. The electricity of Jonas’s latest piece was generated by her improvisation with Moran, a New York-based jazz pianist and composer. At work at his piano and sampler at stage right, Moran constructed a sonic architecture that guided and responded to Jonas’s gestures and drawings.

In a particularly mesmerizing sequence, Moran saturated the theater with a rhythmic drone while Jonas, wearing a geometric fox mask (with one minimal ear mischievously raised), frenetically drew successive images of a canine head and a female figure on sheets of paper she held up to her body as a projected mountainscape rushed diagonally over her. Jonas made her own sounds as well. Her motley ensemble of whirligigs, bells and maracas interweaved with Moran’s refrains and loops to create a mystic aural texture.

This was not Jonas’s first project based on Icelandic lore. Her 1989 video Volcano Saga is a televisual interpretation of a 13th-century Icelandic epic, with Tilda Swinton as a mythic figure whose prophetic dreams unfold through digital effects designed by Jonas. In the early 1980s, when the male-dominated Neo-Expressionist movement threatened to eclipse the feminist practices of the 1970s, the art historian and critic Douglas Crimp argued that Jonas’s use of myth and fairytales (as popular narratives without a single author) had the critical effect of decentering the artist as the generator of the work.

As a collaborative piece based on Laxness’s novel, Reanimation also destabilizes traditional notions of authorship and experiments with narrative form. On the cusp of the Anthropocene—the geological period defined by the human “co-authoring” of ecological processes such as glacial melt—this avowal of collective production takes on an added significance, as do folklore and mysticism as forms of knowledge and narrative possibility.

At times, Reanimation bordered on the phantasmagoric, with Laxness’s eerie description of a woman rising from the dead opening onto a series of apparitions mediated by the projector (including wraithlike swimmers “reanimated” from Jonas’s 1974 video Disturbances). But the performance also had a pedagogic quality, as when a map illustrating glacial melt appeared onscreen. Jonas’s intermixing of the wonderment of 19th-century magic lantern display with the capacities of electronic technologies has roots in 1960s Expanded Cinema. But her merging of myth and magic with the aesthetics of the classroom also evoked the enigmatic, instructional performances of Joseph Beuys.

Like Beuys’s cryptic lessons, Reanimation was equally urgent and inscrutable, as when Jonas traced image after image of Nordic mountain ranges and seascapes in chalk—offering a succession of insistent, gestural outlines, but communicating what? As Laxness’s emissary learned, a glacier pushes the limits of description. Jonas only signaled, through repetition rather than logical development, as the contours of a landscape dissolved like a magic lantern slide, or a glacier, wondrous and imperative.