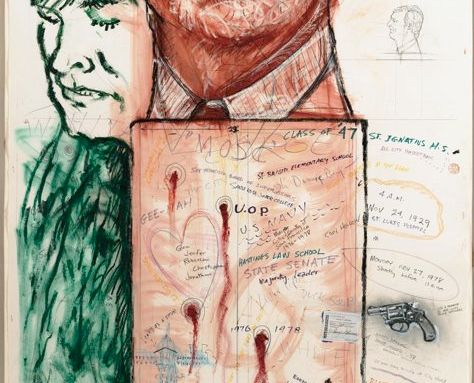 Robert Arneson’s virtuosic ceramic bust of slain San Francisco mayor George Moscone is a reminder that occasionally you can go home again. No matter that the heartbreaking event it evokes remains sui generis: a dual murder too shocking to be categorized merely as a brutal crime and too painful to have been resolved by the passage of time—especially when you were as young and impressionable as I was in 1978. And especially when the heartbreak’s perpetrator was a well-known local politician, San Francisco supervisor Dan White, as were his two victims, mayor Moscone and supervisor Harvey Milk. You might have seen Gus Van Sant’s film Milk (2008), about White’s crime and one of its victims, which, despite Sean Penn’s stand-out performance as the openly gay supervisor, was disappointing for its inaccurate picture of his political circle. By contrast, seeing Arneson’s remarkable 1981 memorial-bust, Portrait of George (Moscone), again was an unalloyed evocation. Recently acquired by the San Francisco Museum of Modern Art, this historically resonant, gargantuan ceramic work is currently on view there. Last summer and fall, it was accompanied by six related works. After so many years of invisibility, the initial sight of the Moscone bust was disconcerting. This impression, however, would soon dissipate.

The story of Arneson’s Portrait of George (Moscone) requires some backtracking. The assassinations in city hall took place on Nov. 27, 1978. Nine days earlier, on Nov. 18, another trauma had shattered the city—the deaths of 918 San Franciscans in Jonestown, Guyana, including 305 children and popular congressman Leo Ryan. In some ways, the murders and suicides in Jonestown were even harder to accept than the shootings in city hall. They evoked the irrationality of “Helter Skelter”—shorthand for another bloodbath, the Tate-LaBianca murders, carried out by the Manson Family cult in Los Angeles a decade earlier.

White’s plan to eliminate the mayor and the entire progressive majority on San Francisco’s board of supervisors (not just Milk) evoked a more conventionally Shakespearean tragedy of flawed character. It also became another milestone in the Bay Area’s recent history as the American epicenter of sometimes violent social change. Events and upheavals of the previous 15 years included Berkeley’s Free Speech Movement (1964), the pre-Stonewall Compton’s Cafeteria riot by transgendered young people (1966), the Black Panther Party’s birth in Oakland (1966), the Summer of Love, centered in the Haight-Ashbury (1967), the San Francisco State University Strike (1968), the Indian occupation of Alcatraz (1969-71), the arrest and acquittal of Angela Davis on murder charges (1970-72), and the founding of the Symbionese Liberation Army in Berkeley (1973) and its kidnapping of Patty Hearst a year later.

On May 21, 1979, following Dan White’s conviction on two charges of voluntary manslaughter—rather than murder—the fiery White Nights Riots erupted, prompting hundreds of arrests and injuries, and fueling widespread antagonism toward the police. They also catalyzed the consolidation of gay political power in San Francisco and the elimination by statewide referendum of the diminished capacity provision that facilitated White’s so-called Twinkie defense—that is, the allegedly causal role of hypoglycemia in the crime—which led to his extraordinarily lenient sentence. (After serving just five years in prison, an unrepentant White was released in 1984 and committed suicide a year later.) The huge San Francisco convention center, under construction at the time of the shootings, was renamed in honor of the slain mayor and, in 1980, Arneson, the well-known Funk ceramist, was awarded a commission for a commemorative bust of Moscone.

Arneson completed Portrait of George (Moscone) in time for the convention center’s opening in 1981. The large bust—it stands nearly 8 feet tall including the base that is integral to it—presents the handsome Moscone smiling infectiously, his face marked by laugh lines and a jauntily misaligned tooth. The ceramic sculpture’s multicolored and energetic surface of scratches and abrasions renders the work compelling both in close up, where it resembles the breakdown of an Impressionist painting into its component brushstrokes, and from afar, where those components resolve into an artful and coherent whole.

But these characteristics didn’t make the work controversial. The mayor’s family and then-mayor Dianne Feinstein were offended instead by some of the inscrip tions, images and graffitilike scrawls on the base—itself suggestive of a truncated column or stunted tree. Some of these inscriptions seem totally innocuous in their references to Moscone’s past (“Hastings Law School”), hobbies and tastes (“shrimpers & rice, everything’s nice”) or oft-used expressions such as “trust me on this one.” Others, however, are highly charged, evoking the murder and trial (including “Smith and Wesson,” “Harvey Milk too!,” “Twinkies” and “leaky as a sieve”—referring to lax city hall security), as are the three-dimensional depictions of bloody bullet holes.

No doubt Arneson’s abilities as a caricaturist—barely in evidence in this work—also suggested an inappropriate levity to some in an era prior to our golden age of animation, whether in the current form of films from Pixar or TV shows for adults by Seth MacFarlane. Christopher Moscone, the mayor’s son, called the bust “cartoonish and demeaning.” The sculpture debuted in public with its pedestal shrouded in burgundy cloth, an indication of less-than-wholehearted support for the work from the Feinstein administration that had commissioned it. Almost immediately after the opening of the building, Feinstein directed the city’s art commission to reject the work and return it to the artist.

Long before Arneson died of cancer at the age of 62 in 1992, he had sold the bust to dealer Foster Goldstrom, who, in turn, sold it to Arizona collector Jay Cooper. (It was acquired by the museum from an undisclosed private collection—possibly from the Cooper estate.) Given its size, notoriety and local historical significance, one might have assumed the work would long ago have entered a public collection in San Francisco. Bear in mind that “the City”—as some locals refer to it—possesses more self-regard than perhaps any other American municipality. The virtual disappearance of this artwork so closely identified with San Francisco also testifies in part to elite ambivalence about the city’s sometimes unsavory past, as if ignoring Arneson’s work would also make the unpleasant events it commemorates disappear. The repressed, Freud argued, almost invariably returns in some form. Despite my initial discomfort at seeing the memorial bust, I found contemplation of it salutary, both soothing and a tonic reminder of Arneson’s achievement.

Vertical George (1981), a 9-foot-high drawing exhibited in the gallery near the bust, brought to mind long-standing rumors of a grotesque alternate (or earlier) version of the bust in which the artist attached the head of Dan White to Moscone’s neck, like a tumor. The drawing shows the bust alongside a figure recognizable as White from its luxuriant hair and effeminate features and the faint tag “White” beneath it, although the figure is frequently misidentified as the mayor’s widow. Both the drawing and the bust as we know it today are shown in a well-known photograph of Arneson’s studio by the photographer Ira Nowinski (which also depicts the artist in front of another drawing in which he’s portrayed himself as a pair of leashed and collared dogs, each bearing his head).

Another Nowinski picture shot in the studio at the same time is often cited as corroborative evidence for of another bust have conflated the drawing and the actual bust into a more emotionally satisfying work that gives physical form to White’s villainy. The idea of Arneson conjoining Moscone and his assassin is fascinating—and creepy. Several playwrights who would dramatize the shootings in works of the 1980s employed the narrative trope of Moscone and White as two working-class sons of San Francisco whose paths in life diverged, only later to fatally converge.

Experiencing the bust also reminded me of San Francisco’s role as a nexus of critically important, unconventional public artworks existing apart from the painting and sculpture mainstream while exerting greater social influence than nearly any work within it. Imagine a line of Bay Area artworks devoted to memorialization and history that extends from Judy Chicago’s slightly earlier, feminist Dinner Party (1979), an installation work which debuted at San Francisco MoMA, to the slightly later NAMES Project: AIDS Memorial Quilt, which originated in the city in 1987, and assumes traditional craft forms and materials à la the Dinner Party and Portrait of George (Moscone), while commemorating an essential moment in queer American history, as does Arneson’s bust. Such public artworks provide the primary social arena today for dealing with seemingly unyielding matters of identity and history. Consider, for instance, the hypersensitivities of objections to nearly every aspect of the commemorations of 9/11. Similarly, the first American memorial to the Jonestown victims was dedicated just last year in Oakland’s Evergreen cemetery; its realization had been stymied for decades by litigation resisting the listing of victims’ names (!).

Portrait of George (Moscone)‘s effect on Arneson should not be underestimated either. According to Shannonhouse, it “really made him reassess his attitude about art and what it could be,” resulting by the late ’80s in works linking nuclear disaster and his own physical deterioration. Chemo I and II (1992) are nightmarish self-portrait busts of startling debilitation and deformation that suggest the darkness of impending death. The exhibition of such works in conjunction with Portrait of George (Moscone) provides an opportunity for reconsidering an extraordinarily talented artist whose work has been insufficiently shown since his death. Arneson is, I believe, one of the most imaginative—and least acknowledged—portraitists of the postwar era. He is in a class with Alice Neel, Chuck Close and Richard Avedon, perhaps surpassed only by Francis Bacon, to whom Arneson paid extravagant homage in his series of portraits of artists. Maybe it’s time we did the same for him: Welcome home, Bob. Welcome home George!

CURRENTLY ON VIEW  Robert Arneson’s Portrait of George (Moscone) at the San Francisco Museum of  Modern Art, through May 22.

Robert Atkins is a California-based art historian and writer. He is coauthor of Censoring Culture: Contemporary Threats to Free Expression.