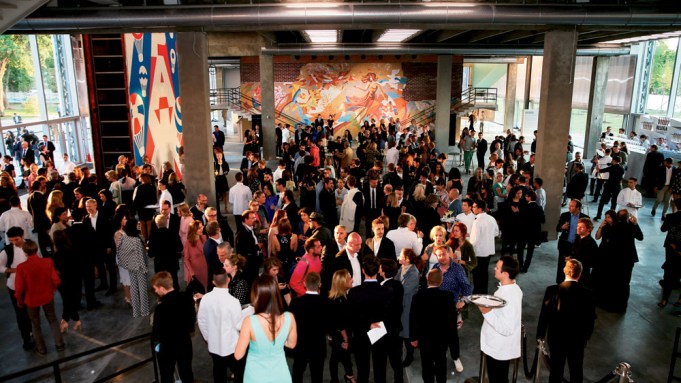 In 2014, Moscow’s Department of Culture launched an initiative to refurbish 20 city-owned exhibition spaces in nine bedroom communities and staff them with innovative curators. Most of the venues have operated since the 1960s and ’70s, when the population boomed and Muscovites aspired to leave crowded collective apartments in the city center for single-family units in new high-rises. The cultural facilities reflected the avant-garde idea of bringing art to the people, of making it part of everyday life, albeit in warmed-over form: the galleries hosted life-drawing classes and exhibited the fruits, flowers and forests of Sunday painters.

The debut exhibitions at two of the rebooted galleries, which I saw while visiting Moscow in July 2014, announced a shift of orientation by recasting that history in the language of contemporary art. At Nagornaia Gallery, located on a broad thoroughfare in Moscow’s south, the crowded basement still brimmed with landscape paintings and wood carvings for sale as interior decor, but the ground floor had been given to Ekaterina Lupanova, a young installation artist. Her skeletal wooden scaffolding outlined previous subdivisions of the galleries, and her sculptures imitated the contours of removed molding. A framed story from the neighborhood paper, dated January 1976, explained how the building got its exhibition hall. Lupanova haunted the space with its own past. Meanwhile, Ground, a gallery with two spaces in northwestern Moscow, used its first show to rehabilitate the still life. Curator Katya Bochavar invited artists to contribute multimedia installations featuring real and artificial plants, all dramatically lit and temptingly tactile.

Moscow Exhibition Halls, as the umbrella organization for these city-funded galleries is called, got off to an ambitious start. Prospects for future growth and experimentation, however, have been curtailed by budget cuts, precipitated by the decline of the ruble’s value late in 2014. The organization’s finances were already lean; founder Sergei Kapkov, who headed Moscow’s Department of Culture, eliminated the halls’ separate administrative offices and unifyied their budgets, creating a network of galleries yoked to a central node. In response to the city’s reductions, curators have increased the duration of exhibition runs. This summer Ground had a show on the history of Russian experimental music in one location and an interactive display of sonic effects for early sound cinema at the other, with studio and practice space for composers and performers at both. The Rostokino Electromuseum, run by media artists Aristarkh Chernyshev and Alexei Shulgin in Moscow’s far north, offered Photoshop classes for neighborhood kids while hosting an exhibition about experiments with language and software called “Techno-Poetry.”

Kapkov’s term as Moscow’s minister of culture was brief (2011-15), but he made palpable improvements to the quality of life. I lived in Moscow from 2002 to 2007, during the second decade of the reign of Mayor Yury Luzhkov—an autocrat reviled for corruption and cronyism, who awarded development deals to his billionaire wife’s construction company and erected dozens of grotesquely kitschy monuments by his friend, sculptor Zurab Tsereteli. It was a time when expats groused about dour service, 500-yard-long billboards, and burritos made with ketchup and mozzarella. Traces of that Moscow can still be detected. But the city has been transformed. For better or worse, it feels increasingly similar to any other international metropolis.

Kapkov believed that leisure is a form of culture, and his legacy is most visible in parks. Greenery has long been abundant in Moscow thanks to the openhandedness of Soviet urban planning, but parks now teem with undulating paths and graceful embankments that remind me of New York’s High Line—especially in Muzeon Park of Arts, where decommissioned Soviet statues that once cluttered a “graveyard of monuments” have been tastefully incorporated into the grounds. Rollerbladers and joggers—unheard of a decade ago—flit past benches where you’d once see beer-swilling idlers perched with their feet on the seats. Smelly grill shacks have been replaced by pavilions hawking gourmet Chinese dumplings and organic beef franks with roast-beet relish. For these changes, Kapkov was dubbed the “hipster minister.”

Kapkov came to the Department of Culture from Gorky Park, where, as director, he presided over the demolition of the former amusement complex’s creaky roller coasters, replacing them with giant beanbags for lounging by the riverside and stages for outdoor concerts. He also arranged the $13.7-million sale, in October 2013, of the restaurant Seasons, built in 1968, and Hexagons, a Constructivist expo pavilion from the 1920s, to billionaire art collector Roman Abramovich, an erstwhile business associate of his. The Garage Center for Contemporary Culture, founded in 2008 by Abramovich’s girlfriend, Dasha Zhukova, moved to a Shigeru Ban-designed pavilion with cardboard columns in Gorky Park in 2012; that venue had its last show, a sprawling installation by Katharina Grosse, this summer, before the Garage moved to new digs a few hundred yards away: the Seasons restaurant structure, renovated by Rem Koolhaas’s OMA.

The Garage rebranded from “Center for Contemporary Culture” to “Museum of Contemporary Art” in 2013. Some might find that premature. As critics noted at the opening of the new Garage in June, the building isn’t fit for the display of large-scale painting and sculpture—the low, narrow galleries on the second floor couldn’t accommodate a show of Francis Bacon or Lucian Freud, to name two painters that Abramovich and Zhukova, who are now married and supply the lion’s share of the Garage’s budget, are known to collect. But the thing is, the spaces don’t need to. Moscow already has several great museums. The State Tretyakov Gallery’s 20th-century collection, boasting works by Malevich, Tatlin and Rodchenko, is a 15-minute walk from the Garage, through Gorky Park along the riverfront. The Garage’s primary focus is displaying archival materials and research projects, along with organizing educational programs and publishing Russian translations of important works of European and American critical theory and art writing.

The Garage’s east wing showcases the Archive of Russian Art, run by Alexandra Obukhova, an art historian who has managed the archive since the early 1990s. (Hiring Obukhova and purchasing her collection is the Garage’s primary justification for calling itself a museum.) For the opening she filled vitrines with relics from apartment shows of the 1980s and ’90s, samizdat poems and newer editioned works. Upstairs, Anton Vidokle’s hypnotic film This Is Cosmos (2014), about outer space in the Russian utopian imagination, is accompanied by a remarkable small exhibition with fantastic designs for spinning towers in the sky by avant-garde architects Ivan Leonidov (1902-1959) and Yakov Chernikhov (1889-1951), and apocalyptic drawings by Vasily Chekrygin (a prodigy who died in 1922 at age 25 after getting hit by a bus), where figures emerge from the areas untouched by his violent pencil. This is one of four research projects currently sponsored by the Garage; another is “Saving Bruce Lee: African and Arab Cinema in the Era of Soviet Cultural Diplomacy (A Prologue)” by independent curator Koyo Kouoh and film expert Rasha Salti, an inquiry into the work of directors who studied abroad at VGIK, Moscow’s premier film school.

At a press conference for the new Garage’s opening, Koolhaas said a trip to the Soviet Union in 1969 as a journalist was what made him become an architect. He encountered the masterful buildings of modernists Leonidov, Moisei Ginzburg and Konstantin Melnikov—already then in poor, neglected condition—but he was equally impressed by new construction projects, which exhibited what he calls the “generosity” and “flexibility” of Soviet architecture. Koolhaas has been spending more time in Russia over the last decade—he served as director for the Strelka Institute, an urban-planning school and think tank that has wielded substantial influence in shaping Moscow after Luzhkov—but the Garage is the first building he’s worked on.

While preservation groups have successfully raised awareness about key buildings from the 1920s and prevented their destruction, the second wave of Soviet modernism is still in the public eye’s blind spot. Koolhaas said that the architecture of the 1960s and ’70s, in Russia and elsewhere, is “being systematically destroyed,” because its familiarity makes it invisible. Koolhaas said the Seasons restaurant in Gorky Park—which stood unused, ruined and overgrown when Abramovich bought it—appealed to him in part because it was designed as a prototype for a cafeteria, copies of which were to be built elsewhere but were never actually constructed, because the public area was too big for the kitchen to serve. OMA’s design preserved what it could of the coarse brick walls and their knobbed green tiles. The central atrium showcases the restoration of a monumental mosaic, in which the favorite symbols of Soviet public art—the dove of peace, the wheatear of prosperity—float dynamically around a woman in a swirling, flame-like skirt as she faces an autumnal wind of change.

Urban development in recent decades has often involved preserving buildings while transforming their purpose entirely: the conversion of industrial spaces to galleries is common in cities from London to Beijing, and Moscow is no exception. (The Garage’s first venue, a decommissioned bus depot, was exemplary of the trend.) But the new Garage eschews the logic of real estate development that replaces vacated factories with cultural sites. The Seasons restaurant was a place for communal leisure; the Garage maintains that purpose, albeit by different means. So it is with the Moscow Exhibition Halls, which retain the function of the venues while ideologically updating their program, expanding the concept of art beyond the parameters of Soviet academism. Both there and at the Garage, the spirit of preservation isn’t about capturing the past as it was. It’s about looking at the physical structures and social fabric of the past to find good intentions that fell short, and giving them another chance.

How Peyton Manning, Joe Buck Teamed Up for a New Swing at Golf for ESPN