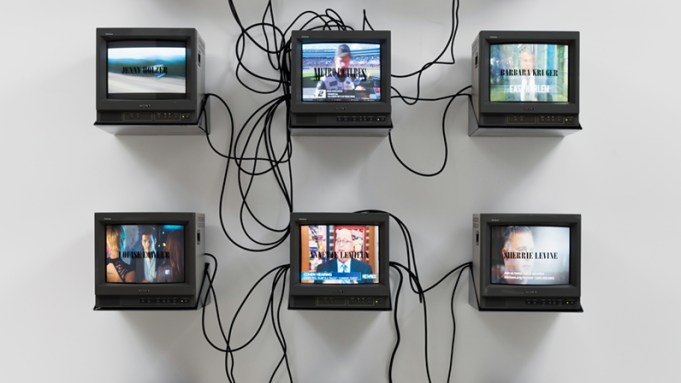 BENDER UNDERSTOOD technology as a progression, as a growing series of effects—a collapse of contexts within concentric rings—and as a medium through which powerful interests increased their oversight. She wanted the viewer not just to look but really see beneath the apparatus of mass media. She wanted people sharpen their ability to process such images, to understand how they were selected and framed. In an oral history, Denker describes her and Bender’s dismay at the idea we would “want to teach a blind computer to see a tank,” and not anything else. The two of them found the central role of the military-industrial complex in driving technological change to be “appalling and sad.”5 Whether in music videos or gallery works, Bender conveyed her politics through her deeply skillful editing and manipulation of images. In one music video for Poi Dog Pondering, she smuggled appropriated images into the background: frames of the introductory sequence she made for “America’s Most Wanted,” a heavily distorted photograph by Susan Meiselas of the corpse of a woman killed in the Salvadoran Civil War, and footage from a pro-choice march she attended in D.C.

As I walked through both floors of Red Bull Arts in an automatic fashion, my mind started to adapt to the sheer amount of material. Vinyl texts are affixed to monitors showing live television feeds, in the front galleries. The phrase I’M GOING TO DIE is superimposed on a child in Planet of the Apes. I saw, out of the corner of one eye, a 3D mask stretched, laughing, its eyes closed. George W. Bush came in and out of focus. In TV Text and Image (Metro Pictures Version), 1986, LOUISE LAWLER and BARBARA KRUGER graced episodes of “Real Housewives” and a BET family drama. The brushed steel armature of Spiritual America (1986) encases backlit film strips. The brochure says these are movie titles, phrases, and clips from Bender’s videos. But they look like cryptic landscapes and machines, like a vague history of technological rupture. I saw a mushroom cloud.

These multiple feeds cause, Bender said, a “constant state of déjà vu,” a blend of time registers. The repetition of violent images creates what Bender called a “deathless” space, one where we become numb to our violent reality. Bender found her own language within the hybrid lexicon of television, video, and computer-generated graphics, to make clear to the viewer how they were embedded and circulated within this system. With her use of live simultaneous feeds, she asked us to be careful, to step back from our own unaffected viewing. The effect of her theaters is to create a space, however temporary, to see past media’s deathlessness.

In Total Recall, we are still able to parse the image. Beautifully edited and choreographed video clips and graphics spool out. In the first half, a choppy exchange of graphic currents fuse into a single perfect stream. The General Electric logo is intercut with an eclipse. A screw finds a home. The real and the abstract switch places again and again. Golden rings turning on the screen evoke a faint memory of opening credits. We feel ourselves able to flow in turn, tracking and mapping similarities in the dance of sigils and glyphs. Mesmerized, we release ourselves to the current.

About eleven minutes in, the screens start to split into some four or five different feeds: runners down the New York sidewalk, CDs sliding in and clicking, fireworks, all synchronized in a stunning composition that overwhelms and overloads. We are meant to experience the “simultaneity of being that causes an almost hallucinatory state of ‘total recall,’” in which we the viewers are also distributed across these twenty-seven screens.6 We flip more and more rapidly between scenes from Salvador (Oliver Stone’s 1986 thriller about a photojournalist documenting the Central American civil war), cars’ shining chrome, frantic couples running, the corporate logos replicated endlessly into the void, and briefly, so brief we might miss it, Jack from The Shining, his head jammed through a bathroom door, grinning.

Bender’s early works successfully treated moving images differently from how they operated in media at the time. Her ability to see what she did when she did was uncanny, and to read her through the lens of the present is, of course, wrong. But over the span of time she was working with video, the way images function changed in precisely the direction she predicted. They became even faster, even more violent, all-consuming. The sense of media as flow became even more intense, and the transition between images of violence and images of harmony, even more seamless.

The interviewees in the oral guides at Red Bull Arts take great pains to differentiate between the Pictures Generation and the rowdy punk sensibility of the artists included in the 1985 exhibition “Infotainment” at Nature Morte in the East Village. Jennifer Bolande, Sarah Charlesworth, and others were countering the art market’s elevation of the object through their exploration of mass media’s aesthetics. It was admittedly difficult to seed oneself and “infiltrate” a medium that conflated and collapsed context so well that any “interruption” would not just replicate the same acceleration. Bender, the only video artist in the show, was acutely aware that artists needed to understand how media spectacle works.7

Looking at Bender’s work as a whole, one can sense iterative lapses in her critique, which couldn’t keep up with the pace of technology and production she was critiquing. When she was swift, she was successful, as with the live television frames, the wild hybrids of corporate footage, and the logos twisted beyond recognition. But equally important to understanding her work are the moments where her critique failed to take hold.

Being a contemporary critical viewer allows us to see this dual success and “failure” with a healthy amount of generosity. We might ask, what would a Bender made in 2019 look like? What can we learn from Bender that can help us critique image production within global computation? For one, to see the moving image, to mark its shifting and elusive ideologies, we have to learn to move with it.

Bender understood how each generation’s revolution was subsumed by a new wave of emerging technology. To that end, she took up the strange, new computer effects that were cropping up in advertisements and brand logos. Denker, whose credits as a computer graphics artist include Kraftwerk’s Music Non Stop video, describes in her oral history interview Bender’s early fascination with computer-generated art. Denker studied at Carnegie Mellon University in the early 1980s, and was one of the first computer artists with formal training. Bender actively sought her out. At the time, it was rare to find women interested in the cumulative effects of and emerging technocratic control in culture, women fueled by a desire to make real critique.

Stuart Argabright, the composer who wrote the abrasive score for Total Recall, describes how hard it was, outside advertising or academic settings, to create art with computer graphics at that time.8 Bender’s romanticized story makes her seem like a cyberpunk character out of a William Gibson novel; Denker gave her after-hours access to the lab at the New York Institute of Technology, and she shot footage of the screens of supercomputers there.

That was how Bender created her montages of new graphics, scrappily pulling together seconds of reels. She sifted through the emerging visual vocabulary of this very new media to find her own. She was able to use this footage to turn viewers toward the military origins of visual media. (The Defense Advanced Research Projects Agency funded early research not only of the internet but of computer graphics.) She realized how the violence of armed control was embedded in the way we see images.

In the 1984 Kitchen press release for the electronic theater piece Dumping Core, we learn Bender meant to take on “the corporate desire to exploit the new visual technology as a consciousness-channeling device.”9 As artist and scholar Philip Vanderhyden says, Bender’s focus on logos (of AT&T, NBC, and CBS) was a product of 1980s media culture, when centralization was easy to see. Now, he says,“It’s harder to pin down who to blame for something.” 10

Even as Bender identified legible corporate forces that could be organized against, she was also foreshadowing a time when their fusion would make an “enemy” of any kind impossible to see. Today, a school board can invest in mutual funds that invest in prison labor, corn futures, drone manufacturing, and sneaker brands all in the course of an hour. The work of media is to abstract what is patently real—through financial markets, through abstract graphics and imagery, through the flattening of both imagery and criticality. Binaries become embedded to seem natural: the normative versus other, the calm of the nuclear family’s unity versus individualist violence and deviance, of perfect control versus excess and chaos and fear.

Through the 1990s Bender continued to explore the same themes. What happens to the mind when it takes in such choreographed and processed images over months, years, decades? How could we remain critical? A fragment of an untitled 2001 installation of white origami butterflies on wooden stakes is saturated with Bender’s fatigue—and shows a hope for some kind of tenderness or lightness or relief in all the visual and emotional violence.

We finally see Bender speaking and on camera in a tucked-away sci-fi film called Volatile Memory (1988). Cindy Sherman plays a cyborg working through an underground network to fix her implant while being constantly surveilled by a corporate-government agent. The soundtrack is ominous, sounding like wind rushing through train tunnels at the edge of a city. Bender appears as an agency researcher, talking with Sherman; they stand in moonlight on a roof. She asks to see Sherman’s implant.

“You know, I can modify the repairs,” says Bender’s character, a specialist in wet circuitry. She looks to the side, and we see her in profile, speaking carefully, slowly: “In fact, due to circuits in my program, you could interface with the agency grid. Total neural release, and total agency access. Your unconscious and its consciousness, complete binding. You’ll know what it’s like to be a machine.” It’s not exactly the best film. The acting is often stilted. But Bender’s screen presence is remarkable. She looks down and away from the camera, and seems to be talking about her own work: the seduction of releasing oneself to the flow, and the struggle not to be subsumed by the machine entirely—not, at least, without knowledge of what is lost.

2. These music videos were directed by Robert Longo, her partner and collaborator.

7. Bender was conscious both of her complicity and of how art, culture, and technology were collapsing into one another. In an interview, she said: “Style gets absorbed really fast by culture, basically by absorbing the formal elements or the structure and then subverting the content.” Gretchen Bender quoted in Sherman.

Many Wealthy American Homebuyers Are Moving Overseas. Here’s Why.