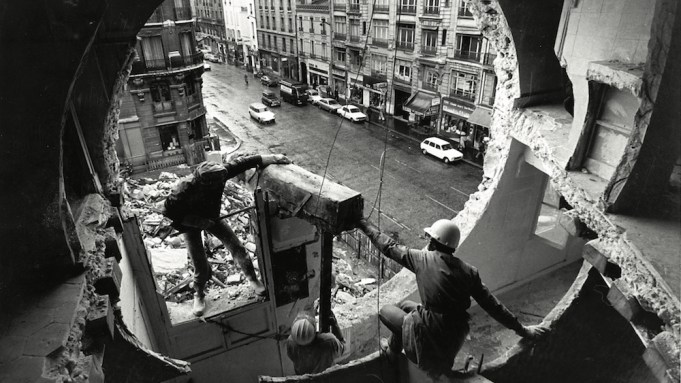 When Gordon Matta-Clark returned to his hometown of New York City in 1969, armed with a degree in architecture from Cornell University, he was already skeptical of the profession for which he had trained. His suspicions were confirmed by what he found upon arrival. Plans for “urban renewal” were prioritizing the construction of skyscrapers like Minoru Yamasaki’s World Trade Center—a monument to postindustrial aesthetics masterminded by billionaire financier David Rockefeller—while the city’s poorest districts were being left to crumble.

By the mid-1970s, the city’s housing and development administrator, Roger Starr, was openly advocating what he called “planned shrinkage,” a policy designed to steer resources away from what he considered to be economically unproductive areas like the South Bronx and, by extension, their inhabitants. Convinced that these neighborhoods, largely populated by poor black and Puerto Rican residents, weren’t worth fixing, Starr proposed the withdrawal of city services in order to accelerate their demise.1 For Matta-Clark the implications of words like “renewal,” at least when used by officials like Starr, were clear: as the artist noted in a 1976 interview, “the city is just waiting for the social and physical condition [of the South Bronx] to deteriorate to the point that the borough can redevelop the whole area into the industrial park they really want.”2

Like the corporate property developers he openly reviled—in his words, they belonged to “an industry that profligates [sic] suburban and urban boxes as a context for insuring a passive, isolated consumer”3—Matta-Clark took these blighted districts as his raw material. But revitalization was not his goal. In the building cuts he produced between 1972 and 1978, when he died of cancer at age thirty-five, Matta-Clark worked against the grain of his architectural training, sawing into abandoned structures and cutting away at their floors, walls, and facades. Rather than improving these decaying buildings in any conventional sense, Matta-Clark’s cuts served in part to magnify extant signs of neglect and disuse to the point of absurdity, serving as something like a funhouse mirror reflection of ’70s urbanism and its failings. Matta-Clark often used the term “anarchitecture” to express his approach to the built environment. First coined as the name of a short-lived group of artists he assembled to think through “metaphoric voids, gaps, leftover spaces”4 (the other members were Laurie Anderson, Tina Girouard, Suzanne Harris, Jene Highstein, Bernard Kirschenbaum, Richard Landry, and Richard Nonas), “anarchitecture” could designate a set of projects, a theory of property and space, or a mode of working.

“Gordon Matta-Clark: Anarchitect” at the Bronx Museum foregrounds the artist’s engagement with the borough, where he produced several formative works. Though these projects have often been overshadowed by more spectacular cuts Matta-Clark made elsewhere—for instance, Splitting (1974), an entire house in suburban New Jersey sawed in half—curators Antonio Sergio Bessa and Jessamyn Fiore argue that it was his encounters with the social and spatial conditions of the Bronx of the 1970s that laid the foundations for his practice.

In the series Bronx Floors (1972–73), Matta-Clark surreptitiously entered several empty residential buildings and excised rectangular segments from the ceiling and floor. Like Robert Smithson’s “nonsites,” which Matta-Clark first encountered at Cornell, each of these floor works existed in two parts. While the voids remained uptown—at least until the buildings were inevitably demolished—the segments of sandwiched drywall, wood, and tattered linoleum were removed and exhibited elsewhere as sculptural fragments alongside photographs of the cuts.

For Matta-Clark, the appeal of the Bronx was partly pragmatic: these interventions could take place without permission because there was rarely anyone to ask. As property values plummeted, thousands of building owners stopped paying their mortgages and simply walked away. (Others set the structures on fire for the insurance money.) As the artist recalled in a 1977 interview, the buildings he explored in the South Bronx were “not part of anybody’s protective property motive,” leaving them free for the taking. “The wild dogs, the junkies and I used these spaces to work out some life problem, in my case having no socially acceptable place to work.”5

But working in the Bronx also served a symbolic purpose. The scope of the borough’s devastation epitomized the failure of modern urban planning and the hubris of post-Corbusian architects like his professors at Cornell, who approached the rhythms of urban life as an abstract problem to be plotted out on a grid. “Work with abandoned structures began with my concern for the life of the city,” Matta-Clark wrote in a 1975 artist statement. “The availability of empty and neglected structures was a prime textual reminder of the ongoing fallacy of renewal through modernization.”6

The care with which Matta-Clark composed the photographic and filmic documentation that accompanied his building cuts suggests he knew that few people would experience his architectural interventions firsthand. None of the modified interiors survive today, but even during the artist’s lifetime, their audience was primarily limited to a few adventurous friends and patrons. Often shot at oblique angles, the photographs convey a sense of the extreme perceptual destabilization produced by the cuts. In Bronx Floor: Threshole (1972), for instance, the artist excised the area spanning an interior threshold so that the horizontal void carved from the floor meets the empty vertical frame of the doorway, resulting in vertiginous views into the spaces above and below. The camera’s tendency to flatten and distort space amplifies the effects of Matta-Clark’s disorienting structural manipulations, compressing the building’s features into a sequence of interlocking planes. In later works, he took this idea even further by creating dynamic photocollages that depicted his building cuts from multiple incompatible perspectives, as if to evoke the experience of moving around and through them.

The exhibition juxtaposes Matta-Clark’s Bronx building cuts with another extensive but less frequently acknowledged body of work that drew inspiration from the borough’s emerging graffiti culture. Included in the show are a series of tightly cropped black-and-white photographs capturing segments of spray-painted walls and train cars, over which Matta-Clark often colored in the vibrant tags by hand, as well as a segment from Graffiti Truck (1973), for which he invited Bronx residents to tag a parked van as they pleased, later cutting it into pieces with a blowtorch. In the past, the graffiti pieces have often been treated as curiosities ancillary to the more important cuts; here, the curators frame the two bodies of work as interdependent. As Bessa writes in his catalogue essay, the graffiti series “goes to the core of Matta-Clark’s idea of anarchitecture,” suggesting that the cuts were strongly informed by the ways in which Bronx taggers made unsanctioned creative use of the streets and structures around them.7

The exhibition ends with two of Matta-Clark’s most ambitious building cuts, positioning them as formal and theoretical elaborations on the ideas first explored in Bronx Floors. For Conical Intersect, created for the 1975 Paris Biennale, he tunneled through two adjacent seventeenth-century town houses slated for demolition as the Centre Pompidou was under construction nearby. For Day’s End, made earlier that same year, Matta-Clark broke into an abandoned warehouse at Pier 52 in Chelsea and carved large apertures into the sides of the building and through the floor, opening up views of the Hudson waterfront and allowing sunlight to stream into the dark, cavernous space. Alongside photographs and preparatory drawings, two gorgeous films show the artist at work as he performs the role of dissident contractor managing each site’s transformation.

In addition to anarchitectural cuts, Matta-Clark made building interventions of another kind, buying properties in SoHo and renovating them into exhibition spaces and live-work lofts. By the mid-1970s, loft conversions, unlike the cuts he made in the Bronx or at the Chelsea piers, were not only sanctioned but encouraged by city officials and other New York powerbrokers eager to see districts like SoHo reinvented.8 Yet the two practices were, in the artist’s own view, fundamentally linked: “Living in New York creates such a need for adaptation that raw, uninhabitable spaces constantly had to be transformed into studios or exhibition areas,” he said in an interview a year before his death. “I imagine this is one of the ways that I became used to approaching space on an aggressive level.”9

Matta-Clark’s assistant Gerry Hovagimyan once described the artist’s intentions for Day’s End as a kind of insurrectionary reconfiguration of public space, like the barricades of the Paris Commune.10 But today, something else comes to mind. Pier 52 sits a block away from the High Line; the surrounding area is now home to some of the most expensive real estate in the entire city, its prices bolstered in part by the developer-friendly rezoning scheme that accompanied the High Line’s conversion from condemned urban waste to picturesque elevated park.

Not long after Matta-Clark completed Day’s End, it attracted the attention of the authorities, who threatened the artist with criminal charges. On the advice of a lawyer, he produced a statement explaining his intent, in which he described the derelict piers as “a veritable mugger’s playground” largely used by “a recently popularized sadomasochistic fringe.” Given this debased state, he explained, he felt justified in his decision “to enter such a premises with the desire to improve the property, to transform the structure in the midst of its ugly criminal state into a place of interest, fascination, and value.”11 Though we might forgive Matta-Clark’s rhetorical flourishes here as tactical, they also point to the ease with which the subversive thrill of the cuts could be redirected toward the sanitizing work of urban renewal, employed as aesthetic tropes by starchitects and corporate developers. If the High Line seems like a corruption of Matta-Clark’s urban vision, with its carefully placed beds of weeds and reconstructed decay used to market neighboring multimillion-dollar condos, it might also be its logical conclusion.