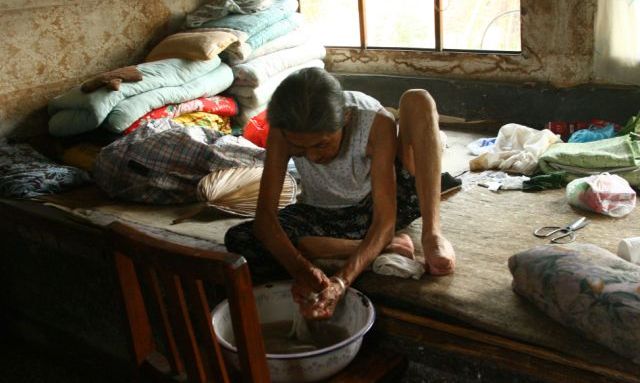 How do Chinese women see themselves? How do female artists in China represent their private concerns, or register their take on a society undergoing rapid, mind-boggling change? Insights are currently available in Philadelphia, of all places, thanks to “Half the Sky: Women in the New Art of China,” an exhibition featuring works by 24 contemporary Chinese women artists. Co-organized with the National Art Museum of China (NAMOC), Beijing, the show is on view through Nov. 13 at the Leonard Pearlstein Gallery at Drexel University.

Below, the American initiator and co-curator of “Half the Sky,” Joseph Gregory, chair of art and art history at Drexel, talks about the survey’s historical context, curatorial issues and implicit themes, as well as the long, complex process of working with NAMOC’s director Fan Di’an and curator Xu Hong to bring the bi-cultural project to fruition.

RICHARD VINE What’s the significance of this show’s rather cryptic title?

JOSEPH GREGORY It’s cryptic only for viewers unfamiliar with the famous dictum of Mao Zedong, who set Communist gender ideology by proclaiming that “women hold up half the sky.” In China, his pithy assertion is extremely well known. That’s one reason the title was so appealing to me: the discrepancy in the way the phrase is received in the two cultures immediately evokes a conflict of perspective. My Chinese collaborators resisted adopting this title because to them it smacked of old politics. It made them feel like Mao had been invited into the room; they find the slogan as outdated as, say, the political gesture of bra-burning might seem to us. In their view, the issue of women’s socio-economic rights was solved a long time ago by their visionary leader. Using the phrase as a headline for an all-woman show might imply that there are still problems on that front in China.

But there are problems, large and small, and I wanted to draw attention to that fact. No one, not even Mao, can dictate consciousness, so there remains a significant gap between ideological promise and socio-economic reality. And of course, this is not an issue unique to China-it’s global and pertains to the art system as much as to any other sphere of activity. More or less across the board, women are under-represented and under-rewarded. One of my leading impulses in creating the show was to assemble a sizable number of outstanding female Chinese artists, so that they could collectively demonstrate the variety, vitality and depth of their achievements.

VINE There are critics who argue that only women should curate shows by women artists, and only Chinese curators should present Chinese art. What is your response to those claims?

GREGORY Ah, the “gotta be one to know one” argument. My deep objection to that position is based on nothing less than my understanding of what art is—namely, something more than a social or psychological thumbprint. If you hold that artworks achieve meaning through their complex relationship to both the discourse of fine art and the broader culture, then you don’t have to be one to know one. Rather, you have to be a conscientious student of the discourse and the culture to which it belongs.

I think that the objection is little more than an ill-considered echo of the politics of social liberation: no group should “speak for” another group. But this view conflates speaking for another person with speaking about something that a person has said or done.

VINE It’s notoriously difficult to curate shows of Chinese work outside of China. What was the process like and how long did it take?

GREGORY Three years. Travel to the other side of the planet is obviously arduous and costly, so it took a while to accomplish the necessary research. I visited many studios and spoke to many artists, an experience I found extremely rewarding. I had a kind of double cachet that caused doors to open easily: I was from America, the professional promised land, and I was teamed up with the National Art Museum of China, an institution that enjoys a good deal of prestige in China.

The real difficulty came from having to negotiate curatorial decisions. I wasn’t always convinced by the quality of some of the works that I saw, and so I had to speak up at my many meetings with the museum staff and step on some toes. Plus I am a man, and so I ran headlong into the misbegotten opinion that you just mentioned: some NAMOC staffers were convinced that I didn’t have the insider intuition to understand and properly judge the art. Inevitably, there were compromises on both sides.

VINE Did you find feminism, or feminine consciousness, to be a vital issue among the artist you visited? How would you characterize their view of themselves and their role in the Chinese art scene?

GREGORY No one spoke of “feminism” nor suggested that their work was concerned in any way with a feminist agenda. In fact some, like Lin Tianmiao, explicitly rejected any such alignment. She is not, she told me, a “woman artist”—she is just an artist. You have to remember that Western feminism, as a form of politics, is an imported notion in China. The artists that I visited were as solicitous of curatorial attention as you would expect any male artist to be. But none seemed desperate for the attention—not like the throngs of graduate students, mostly male, that I have met at various venues in Beijing. Top students are all keenly aware of the prospect of sudden fame and fortune in the West, and many have an almost frightening eagerness.

I did encounter, in more than one way and in more than one situation, the idea, quite explicitly expressed by individual women, that the vigor of spirit required to be a good artist is essentially a male principle! There is a widespread, traditional belief in essential gender qualities: yin and yang.

VINE How do China’s women artists see themselves in a wider sense, as part of a society changing at hyper-speed—and not, at times, without displacement, inequity and bewilderment?

GREGORY Women artists are as engaged by the epochal transformations of Chinese society as are male artists. One finds every relevant theme expressed in their work: social displacements and cultural losses, delirious consumerism and its existential costs, the flood of mass-media culture and its challenges to personal and cultural identity, and the destruction of nature that rapid urbanization and industrialization produce.

But there are also some issues that seem to be unique to women artists: suffocation and psychological damage often wrought by their personal relationships to men. Some of the most compelling Chinese women artists deal in things like “suicidal” gunshots into mirrors, stitched roses, and naked figures wrapped and bound. It’s clear that the ancient hand of patriarchy still acts decisively in contemporary Chinese culture, in both obvious and subtle ways.

Summer Lee Is Coming to Congress — and to The Squad