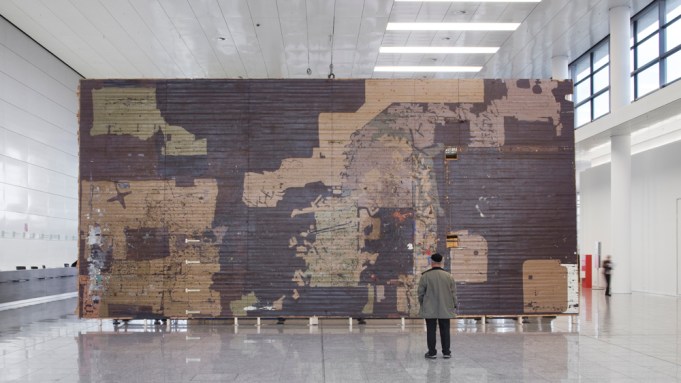 The new space’s debut comes less than two weeks after the row of small galleries on West 27th Street finally re-opened after Super-storm Sandy. Situated on the second floor, the new facility was unaffected.

“Dieter Roth. Björn Roth” (Jan. 23–Apr. 13) is the first exhibition on West 18th Street, and it includes installations, sculpture, video and prints by the father-and-son team, about half the works on loan from the Dieter Roth Foundation, Hamburg. Featured are more than 100 objects, created since the 1970s, some never before shown in the States.

As Hauser and Wirth’s Marc Payot told A.i.A. during a preview visit this fall, “Roth represents a kind of father figure for many of the artists we represent, in that his work is process-oriented and often collaborative, as well as highly complex and multilayered.” A gallery press release points out that Roth’s work sprung from a central concept of the indivisibility of art and life.

Visitors are greeted in the entryway by a site-specific, permanent work by Martin Creed, in which vertical stripes of colorful duct tape of various designs adorn the wall of the stairway that leads up to the second-floor space to the reception desk.

There, visitors turn a corner into a nearly 25,000-square-foot, column-free, sky-lit space under wood ceilings supported by black steel trusses. New York architect Annabelle Selldorf oversaw the design of the new facility, which is in the former home of the Roxy discotheque. It neighbors the High Line elevated park and Frank Gehry’s building for the IAC headquarters.

Large parts of the space are perfumed with the scent of chocolate, from Selbstturm (Self Tower), 1994/2013, a giant column of busts made out of chocolate, stacked on glass shelves in a metal frame, whose production continued in the gallery, with two young men cooking up the chocolate and carving the busts. “There are two-men teams working in 12-hour shifts,” the gallery’s Michael Hall told A.i.A.

Björn Roth led a walkthrough of the show Monday, explaining the genesis of two gigantic works, The Floor I (1973-1992) and The Floor II (1977-1998), that are actual floors from studios Roth occupied, displayed upright in the manner of a painting.

“The idea of the floor paintings came in 1992,” he said, when they had a large wall to fill in an exhibition. He pointed out where a section of the floor had been cut out to accommodate a door in that wall, saying with a smile, “we had to cut a door in the floor.”

Standing in front of some paintings made from tablecloths, he noted that “most works in the show are made from materials that had some other life.” The paintings are dated with huge spans of time, like Tischtuch mit Gechirrbildern (1987-94). “His philosophy was that you don’t do much at any one time,” he said, speaking of his father. “When I look at these paintings, every line brings memories from different times.”

Memorabilia from the Roxy adorns a café/bar created by Björn, who often collaborated with his father to create bars, and Björn’s son Oddur, whose name, he explained to A.i.A., is Icelandic for the point of a spear. “The business end,” he added with a mischievous smile.

“Some staffers had birthdays during the installation, which we celebrated here,” Hall pointed out, “and you can still see leftover cake in the glass-fronted filing cabinets above the bar.”

“Those are American-made cabinets,” Oddur told A.i.A., “which were exported to Iceland maybe 50 years ago, and which we found as scrap and brought back to the States. Scrap always has a history. And we live off of it. Or,” he asked philosophically, taking another drag on his cigarette, “does it live off of us?”

Oddur was standing in the bar, near a large glass cabinet in which scraps of paper were whirling around. “That’s a shredder for tearing up bad reviews,” he said with a meaningful glance at an art critic standing nearby.