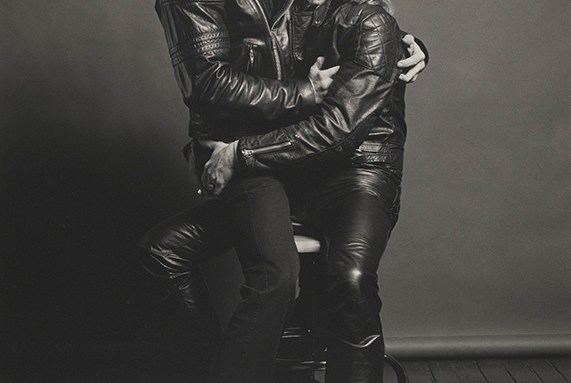 It seems difficult to reevaluate Robert Mapplethorpe’s career today, partly because the furor over the cancellation of his first retrospective at the Corcoran Gallery in 1989 inspired such thoughtful assessments of his work then. No one will ever sum up the power of that work more succinctly than Arthur C. Danto did in his 1996 book on Mapplethorpe, Playing with the Edge. “There is a tension at the heart of Robert Mapplethorpe’s art, verging on paradox, between its most distinctive content and its mode of presentation,” Danto wrote. “The content of the work is sufficiently erotic to be considered pornographic, even by the artist, while the aesthetic of its presentation is chastely classic—it is Dionysiac and Apollonian at once.”

Yet two new exhibitions in Los Angeles, at the J. Paul Getty Museum and the Los Angeles County Museum of Art (LACMA), manage to give us a new perspective on Mapplethorpe as both an artist and a human being. Even 27 years after his death from AIDS, to many people, Mapplethorpe is still the demonic figure North Carolina senator Jesse Helms made him out to be. But these two exhibitions—especially LACMA’s—do a great deal to humanize him in ways earlier exhibitions couldn’t.

These shows benefit from the Robert Mapplethorpe Foundation’s large donations of artwork, along with a significant amount of archival material, to both LACMA and the Getty Center’s Research Institute as well as the Getty Museum. Among the bodies of work that came to LACMA was the “X Portfolio,” Mapplethorpe’s study of sadomasochistic homosexual lovers that caused all the controversy. It has a gallery mostly to itself at LACMA. But the exhibition design gives visitors a chance to see how Mapplethorpe’s sensibility as an artist progressed to that point.

The first gallery of the LACMA exhibition acknowledges the gay community in which Mapplethorpe immersed himself. A wall facing the entrance groups photographs of men in black leather. At the center is a 1980 Mapplethorpe self-portrait that’s all attitude. He’s in a black leather jacket with a cigarette dangling from his mouth and a shock of hair combed forward in the style favored by greasers and bikers. But to the right, Brian Ridley and Lyle Heeter (1992), also in black leather, make a more confusing composition. One man stands beside the other, holding chains attached to his partner’s ankles, wrists, and neck. It’s puzzling that the man in chains is seated in an old-fashioned wing chair on an oriental rug, as if the composition were of a man and his wife in a typical middle-class home of the 1950s—the sort of home in which Mapplethorpe grew up.

The freestanding wall divides the large first gallery into two smaller ones, the second of which is very different from the first. Its introductory text begins with the following quotation from Mapplethorpe: “I was a Catholic boy. I went to church every Sunday. A church has a certain magic and mystery for a child. It still shows in how I arrange things. It’s always little altars.” The gallery takes viewers back in time to the late 1960s and early ‘70s, when Mapplethorpe was still a somewhat callow lad whose identity was in transition. This phase of the exhibition draws on the Mapplethorpe archive, showing what his art was like before he took up photography. He was clearly wrestling with his Catholicism, transforming its shrines, iconography, and stations of the cross into a language of his own travail.

The gallery includes paintings Mapplethorpe made as a student at New York’s Pratt Institute as well as a three-dimensional wall piece and a freestanding installation. The wall piece, called Tie Rack (1969), contains a chromolithograph of the Virgin Mary, pulling open her outer robe to reveal the sacred heart. Mapplethorpe inserted pins in her hands—giving her stigmata, as it were—and from the pins he hung a little crucifix. Identical black neckties hang from either side of the Virgin Mary, because the piece was a gift for Patti Smith, who always wore men’s ties.

According to Smith’s memoir Just Kids, the early series in which Mapplethorpe collaged and painted over found pictures began with color chromolithographs of Catholic saints that they found in junk shops or at the Salvation Army. He later used gay pornography that he bought (or stole) from Times Square shops. “The first time I went to 42nd Street and saw those pictures in cellophane, I was straight and didn’t even know that those male magazines existed,” reads a quote from Mapplethorpe on a wall text. “I was sixteen and not even old enough to buy them. I’d look in the window at those pictures and I’d get a feeling in my stomach. I was in art school then and I thought, God, if you could get that feeling across in a piece of art. . . . It was exciting but definitely forbidden.”

There are other, equally affecting variations of this sort of work in the gallery. On an enigmatic altar, a small statue of Christ hides behind a lampshade’s sinisterly dense black fringe. A vitrine holds fetishistic necklaces that Mapplethorpe strung with beads, coins, a tiny rampant American Eagle, and a claw of unidentifiable origin. It also includes a photograph of a salesman’s case with the necklaces, which Mapplethorpe hoped to make a profit from. The work that LACMA curator Britt Salvesen put into this gallery to represent Mapplethorpe’s life passage paid off. The effect is so poignant that it is impossible to go on to the later work without both compassion and admiration for the artist’s ability to accept himself for who he was and to turn that acceptance into an artistic achievement.

Curator Paul Martineau’s show at the Getty is no less compelling, though it doesn’t have the same dramatic effect that Salvesen created with archival material. At the Getty’s press conference, Martineau said that he’d decided not to put the more controversial images up front in his installation because he didn’t want anyone to turn around and walk out without taking the full measure of Mapplethorpe’s talent. That first gallery presents beautifully what a great portraitist Mapplethorpe was.

Martineau devoted a gallery almost exclusively to Mapplethorpe’s nude studies of African-American men, which are almost as controversial as the “X Portfolio” due to the underlying racial tension. The only other prints from the three early portfolios, though, are four from the “Y Portfolio,” devoted to flowers. The exhibition culminates in Mapplethorpe’s late self-portrait from 1988 which shows, in front of his ravaged good looks, his hand wrapped around a cane topped with a tiny carving of a skull.

The Getty show doesn’t end there, however, but with a grace note that, like LACMA’s show, humanizes Mapplethorpe, in this case by honoring Sam Wagstaff, Mapplethorpe’s lover. Wagstaff was a patrician New Yorker with inherited money. He’d been a curator and then a director of important museums. An openly gay man with a penchant for S&M, he was an aesthete who had collected silver before discovering photography, which became his true passion. The Getty acquired his collection of nineteenth- and early twentieth-century photography in 1984 as the department of photography’s crown jewel. The only fault one could find with Martineau’s selection of masterpieces from the Wagstaff collection is that it threatens to outshine the Mapplethorpe show for which it serves as a coda.

Even so, like Salvesen’s installation, here at the end Martineau’s encourages empathy for both men by showing them together to have been not just hedonists, but humanists. With Wagstaff’s collection alone, the Getty put itself on a par with the photography holdings of major museums in the US and in Europe. The large selection on view ranges from work by William Henry Fox Talbot, one of the inventors of photography in the early nineteenth century, to Larry Clark, who photographed the underworld of runaway teenagers in the late sixties. The collection’s comprehensiveness ultimately lies in its roster not of subjects or photographers, but of styles ranging from the documentary work of Civil War practitioners like Alexander Gardener or Timothy O’Sullivan to masters of photographic effect like Cecil Beaton and Edward Steichen.

For me, the ultimate test of a collector’s eye isn’t the rare masterpieces by acknowledged masters he or she has acquired. It’s the piece by an unknown maker or neglected photographer whose work hasn’t been recognized before. The Wagstaff collection is as rich on that sort of discovery as it is in important work by major figures from the very beginnings of photography through the 1970s. Martineau’s chronological installation reveals how the dual purposes of documentation and artistry to which photography was put from the beginning have merged in the greatest work the medium has produced. In Danto’s terms, the Dionysiac nature of the subject matter and the Apollonian quality of the aesthetic have come into perfect balance. An intellectual understanding of this informed Wagstaff’s collecting, and his collection helped shape Mapplethorpe’s instinctive grasp of how to make photographs.