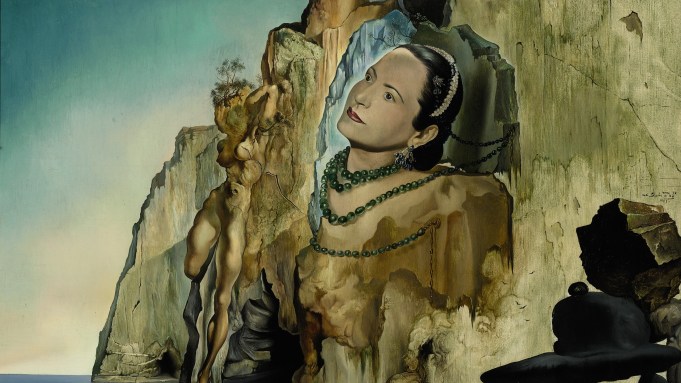 Sotheby’s recently announced that it will offer at auction this spring and fall 20 portraits of a cosmetics industry pioneer and one-time princess (by marriage), the late Helena Rubinstein. The unusual trove includes works by Salvador Dalí, Graham Sutherland, Raoul Dufy, Pavel Tchelitchew, Marie Laurencin and others, estimated to bring a total of over $2 million.

Rubinstein (1870–1965) was not a beauty herself, but she knew what it takes to look radiant. She had a good eye for fashion and art, and a sense of who among the prominent painters of her day could render her attractive for posterity. As her company grew increasingly successful in the 1940s and ’50s, the Polish-born Australian businesswoman commissioned numerous well-known artists to capture her likeness on canvas—almost always favoring her left side. After her death, the works hung in the lobby of the Helena Rubinstein Foundation’s New York headquarters for years until the organization, which distributes grants in support of a broad range of programs in art, science and community development, decided to move its offices and sell the collection.

Expected to generate the largest sum, Dalí’s 1943 Princess Arthchild Gourielli-Helena Rubinstein (est. $1–1.5 million) is included in Sotheby’s May 3 evening sale of Impressionist and modern art. A striking example of the Surrealist’s portraiture, it shows the head and shoulders of the subject as if carved from the rocks of a seaside cliff. An elaborate beaded necklace seems to bind her to the crag.

The Sutherland and Tchelitchew lots will appear on the block in a following day sale of Impressionist and modern art, on May 4. The others are to be sold in the fall. Tchelitchew in his Head of Helena Rubinstein Encrusted with Sequins (1934), est. $150,000–200,000, covered the sitter’s face with sequins; many of them have tarnished over time, yet the image still conveys a rather haunting presence. The largest and most remarkable canvas in the group, Sutherland’s Helena Rubinstein in a Red Brocade Balenciaga Gown (1957) is one of the English’s painter’s most successful portraits. It was widely admired by artists and critics when reproductions of it appeared in the 1950s. Andy Warhol included a reproduction of the work for comparison in the catalogue for his own 1979 show of portraits at the Whitney Museum. The presale estimate for the Sutherland is $100,000–150,000.