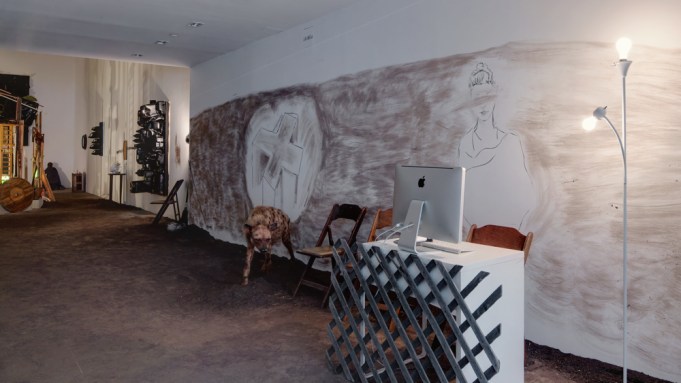 “You don’t want to be like Michael Jordan when he left basketball to play baseball-but you do have to keep pushing forward,” says California painter Henry Taylor of his recent foray into sculpture and installation. Taylor, who turns 54 this year, is best known for portraits in acrylic of the family, friends, strangers and heroes of music and sport who cross his amiable path. His lush, imperfect surfaces complement and humanize his subjects—each piece is hyperbolized with rich color, intuitive gestural brushwork and subtle pop sabotage, including modified brand logos.

In “March Forth,” his solo show at Untitled gallery on New York’s Lower East Side [through Apr. 22], Taylor unveils what he calls “out-stallation.” The artist has created an immersive environment, conjuring a primeval street party with walk-on appearances by wild animals, art heroes and the people and places who inspire Taylor. A video interview of Taylor projected on the gallery’s front wall introduces viewers to his world. The sound of his quietly vibrating voice announces the show’s cluttered drama. One subsequently encounters several wall drawings, including a portrait depicting Isaac Hayes with the appellation “Hot Sugar,” and an unidentified woman with her eyes smeared out (all works from “March Forth;” To be titled, 2012).

For both “March Forth” and his survey at MoMA PS1 [through Apr. 9], the artist has created large assemblages that reconfigure quotidian objects. At the Untitled, this means a makeshift hut composed of jerry-rigged mops, brooms, beer bottles, wicker chairs and a rolled-up Persian rug-to list just a sampling of its mixed media. The hut stands on a dirt- and cigarette butt-strewn floor, and was inspired by the artist’s travels in Ethiopia. At MoMA PS1, a jungle scene (It’s Like a Jungle, 2011) serves as a riveting, chaotic barrier to entrance.

The materials are part and parcel with the artist’s lean toward the beauty of the commonplace: “I wanted to use things that were naïve and immediate-nothing that requires a bunch of tools,” says Taylor. “The rocking chair, the brooms—those things are simple.” Taylor’s handling of these objects reinvests them with the sophistication of craftsmanship—in his hands they shrug off their identity as commodity objects and are born anew as the raw materials of an artisan.

Both shows also feature many other stand-alone sculptures. At MoMA PS1, the rockers from one of Taylor’s favored rocking chairs form the base of a sculpture (Rock It, 2012) that is composed of a stack of boxes topped with a mannequin’s head. The most irreverent object in “March Forth” is a taxidermied hyena, which the artist decided to include after crossing the path of a live version on the prowl in Ethiopia. “I am a hunter and gatherer. Sometimes I just collect things because I like the label. I saved all my mom’s stuff after she died. I think maybe my decision to make sculpture starts with that.”

Taylor, who worked as a psychiatric nurse for 10 years, imbues his art making with lived history and a deep connection to the people and places that surround him. One of the strongest pieces in March Forth is a simple line drawing, rendered in charcoal and dirt, depicting the crossed-shaped Church of St. George in Lalibela, Ethiopia. “I’m not super religious, but I went to the church with Haile Selassi’s granddaughter, and I got baptized again there,” says Taylor. “When I did the drawing of the church, I thought: I’m ready for the show. Sometimes you just need that last garnish.”