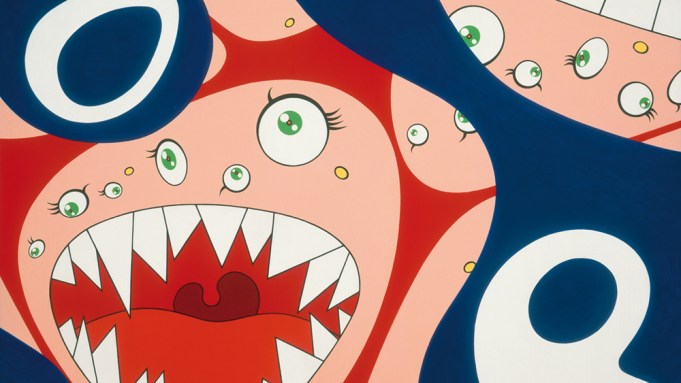 Art in America‘s 2017 Guide to Museums, Galleries, and Artists is now available. Published annually in August, the Guide is a comprehensive listing of art dealers and exhibition venues, cross-referenced by the names of artists who are represented or exhibited at each site. This summer we also launched an online version of the Guide that will be updated throughout the year, with current contact information and experts’ picks of the most exciting shows on view in cities around the globe. The print Guide also spotlights the top museum exhibitions of the 2017–18 season. Below we’re sharing a few of the summer shows that are now on view or opening soon. For more, look for the Guide at newsstands, and check out the online Guide! —Eds.

Few artists move between the worlds of art and commercial culture as easily as Takashi Murakami. Often directing teams of workers, Murakami produces everything from luxury handbags to paintings and sculptures, employing an iconography that melds traditional Japanese painting motifs with imagery inspired by contemporary anime. This retrospective, “Takashi Murakami: The Octopus Eats Its Own Leg,” features some fifty paintings, many monumental in scale, ranging from the artist’s work of the 1990s to new canvases on view for the first time. Visitors can follow the evolution of Mr. DOB, a cartoonlike character, by turns adorable and menacing, whose presence has been a staple in Murakami’s work for decades.

Conceptual artist and painter Lee Lozano (1930–1999), active in the New York art scene from 1961 to ’71, remains an enigmatic figure, not least because her final work, Dropout Piece (begun ca. 1970) consisted of removing herself from the art world. This retrospective provides an insight into the multifaceted nature of Lozano’s short-lived career, featuring a large number of provocative paintings and drawings that angrily eroticize various tools, including drills and hammers, as well as her later, more abstract series of “energy paintings,” comprising geometric shapes rendered in muted tones.

Since moving to Los Angeles from Tel Aviv in the late 1990s, Elad Lassry has honed a highly conceptual approach to photography that involves treating images as sculptural objects. Archival film stills, vintage magazines, commercial catalogues, and textbooks are among the source materials that Lassry rephotographs and displays in frames of his own design, some of which he adorns with fabric constructions. This show of around eighty works from the past decade is co-curated by photographer Jeff Wall and Vancouver Art Gallery director Kathleen Bartels. A selection of drawings, sculptures, and films complements Lassry’s photographs, and a performance program highlights the influence of modernist choreography on his practice.

Annabeth Rosen‘s ceramic sculptures can resemble organic forms teeming with bulbous growths. Her bundled-together amalgamations of glazed and fired pieces often incorporate fragments of broken vessels, and frequently take the form of monumental pillars held together with wire or rubber tubing and installed on wheeled dollies. Such sculptures appear workmanlike despite their inherent delicacy. Surveying the past two decades of Rosen’s career, which began in the 1980s, “Fired, Broken, Gathered, Heaped” features eighty-five sculptures and around forty paint, ink, and gouache drawings.

Giacomo Casanova (1725–1798) spent his last years as a court librarian, writing one of the most famous memoirs of all time. And what a life he had to recount. By turns a conversationalist, wit, author, alchemist, quasi-doctor, violinist, finance official, gambler, spy, and inveterate womanizer, he cavorted in Venice, Paris, London, Rome, and Moscow; hobnobbed with cultural greats like Voltaire, Rousseau, Mozart, and Benjamin Franklin; consulted with monarchs and popes; employed numerous names and identities; and suffered multiple incarcerations (for bad debts and moral offenses), once daringly escaping from the Doge’s prison. “Casanova: The Seduction of Europe” treats the adventurer as an exemplar of the aristocratic mores of the eighteenth century. In addition to some two hundred works by artists such as Canaletto, Tiepolo, Piranesi, Boucher, Fragonard, Reynolds, and Hogarth, the show features period furniture, metalwork, ceramics, musical instruments, and clothing.