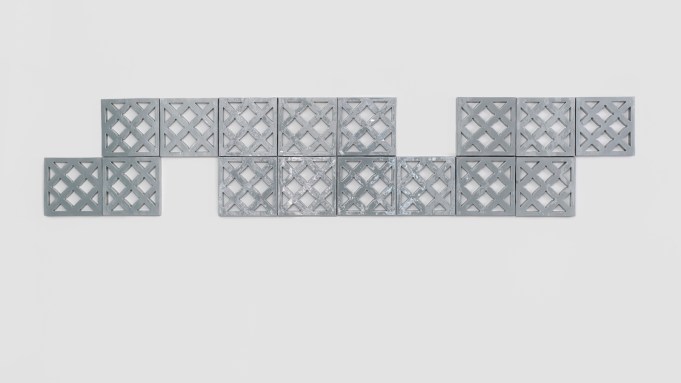 In the first hours of Tuesday’s preview of the Swiss Art Basel fair, dealers on the first of the fair’s two floors, where modern (or, as most dealers currently call it, classic) artists are usually located, were mostly excited about their prospects.

The 45th edition of the mammoth fair, including 285 galleries from 34 countries, includes the customary Unlimited and Statements sections, which feature large-scale projects by single artists and solo shows by emerging artists respectively. There’s also Parcours, introduced in 2010, featuring artworks in the streets of Basel; Edition, which features galleries showing editioned works and multiples; and the new project, 14 Rooms, featuring performance art and curated by the Serpentine’s Hans Ulrich Obrist and Klaus Biesenbach of New York’s Museum of Modern Art.

Collectors like Maja Hoffman, curators including Okwui Enwezor and artists such as Mark Bradford were seen scouting the booths.

The customary gallery giants were, as expected, selling multi-million dollar works, like the multinational White Cube, which moved Damien Hirst’s Nothing is a problem for me (1992) for just under $6 million, and David Zwirner (New York and London), which sold a Jeff Koons sculpture for $5 million. Several galleries that usually showed on the second floor, where contemporary art is concentrated, this year moved downstairs for the first time and featured a combination of classic works alongside more contemporary artists.

New York dealer Andrea Rosen told A.i.A. that she had sold more than 80 percent of her booth by 1:30, two and a half hours into the preview. She opted to show contemporary art along with historical works because “the juxtaposition heightens the experience.” She reported that work by both older and younger artists was selling equally well. She had found a buyer for an untitled 1957 wood sculpture by Carl Andre that sold for $275,000; Polish sculptor Alina Szapocznikow’s Lampe-Bouche, (1967), was on offer, was priced between $417,170 and $516,000. She’s also offering contemporary artists such as the American Michael St. John, whose sculptures are priced at $25,000-$35,000.

At Lugano’s Buchmann Gallery, which also exhibited a combination of more classic artists with contemporary ones, were German-Iranian artist Bettina Pousttchi’s immediately recognizable street furniture sculptures. Also on view was a new ceramic wall piece mimicking the pattern on the moulding of an old house and tagged at $61,000.

An anonymous collector bought two pieces from Galeria Starmach, Krakow, in the first two hours of the preview. One was the mixed-media painting What for? (1964), by Edward Krasinski, for $41,700; the other was a Henrik StaÅ¼ewski untitled constructivist-style painting, for $30,000. Both artists were active during the 1960s in Poland and created conceptually driven painting and sculpture.

In the Edition section, Matthias Kunz of Munich’s Sabine Knust Gallery reported to A.i.A. strong interest from young collectors but also institutions, as well as established collectors who are slowly starting to appreciate prints as artworks in their own right. Two works by Daniel Richter (in editions of between three and five), priced around $6,000 each, sold before the fair started, while an additional four sold in the first two hours of the preview.

Photography is also seeing a rise in interest from collectors, and not just those specialized in the medium, according to Cologne dealer Thomas Zander. He was reasonably happy to have sold a large series of unique photographs by Albert Renger-Patzsch, a photographer who influenced Bernd and Hilla Becher. The Renger-Patzsch works show factories and industrial zones dating back to the ‘30s, and went for only $250,000 as a series, while three experimental photographs by Constantin Brancusi, showing sculpture in his studio, were tagged at $200,000 each at Bruce Silverstein. They hadn’t sold yet; Silverstein suggested that this may be due to the confusion collectors experienced when confronted with a medium they were not familiar with in the sculptor’s practice. But he did sell a series of nine photos by the Bechers for $145,000.

Asked what trends he was noticing, Yves Aupetitallot, director of the French museum Le Magasin Grenoble who was visiting the fair to meet colleagues and network, noted a return to history. “Collectors may be less willing to speculate by paying wild unsupported prices. Investing in historical works may be a way for the market to regulate itself,” he said. “And in this regard, the market nourishes itself from institutions and biennials that of late have also been busy reintegrating overlooked modern artists into the art canon.”